‘In the Heights’ Review: The diaspora of dreams

The high-energy adaptation of Lin-Manuel Miranda's Broadway hit finally arrives in cinemas, dazzlingly making good on a year's worth of anticipation. 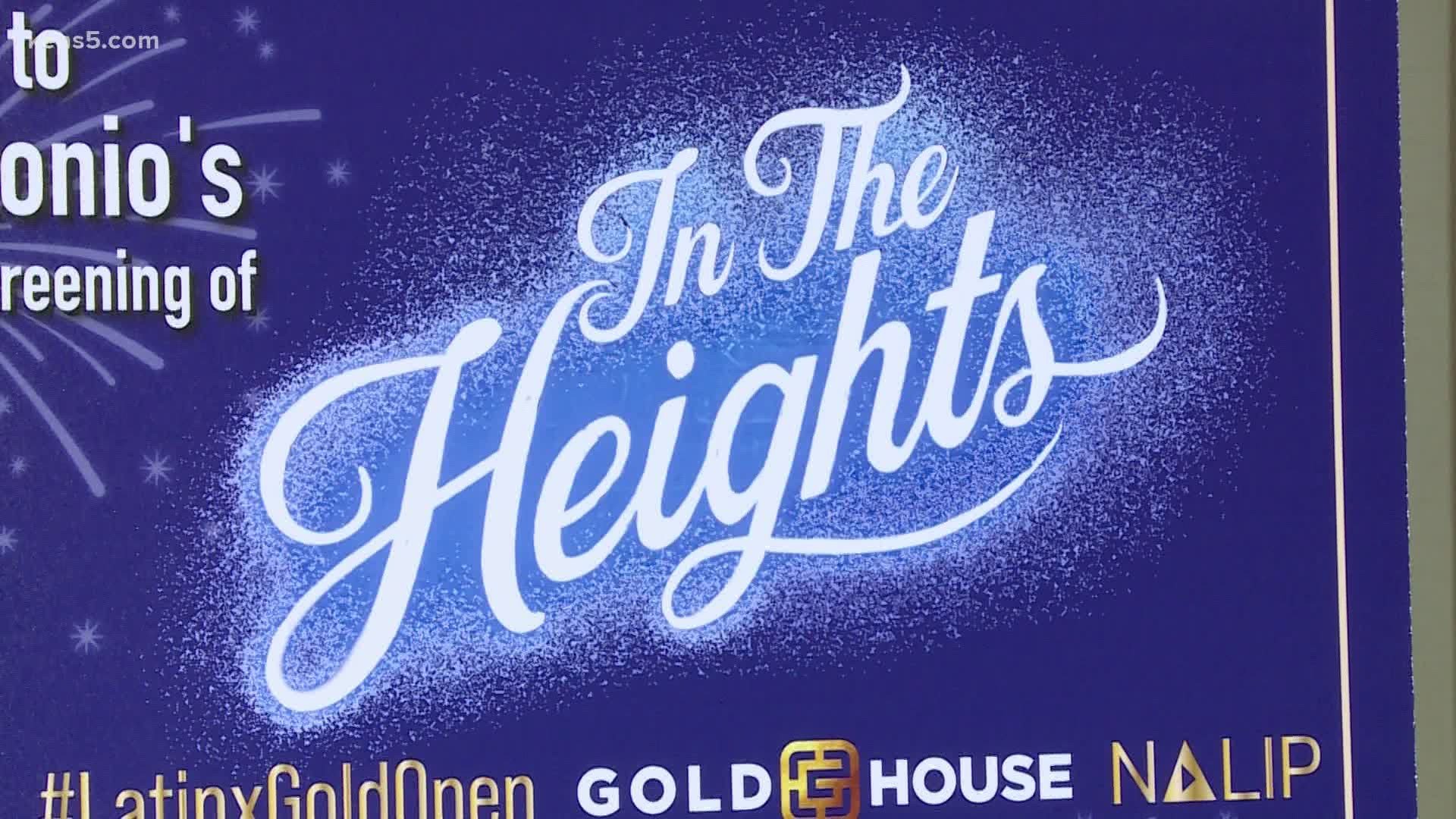 It may come as no surprise to hear that a scene of inter-household embrace around the midpoint of “In the Heights,” one of the few understated moments in an otherwise spectacularly spirited moviegoing experience, carries with it a tinge of the surreal we wouldn’t have felt had this movie come out a year ago as was originally intended. A year of lockdowns and reunions relegated to Zoom – of normalcy upended – has turned the most normal-seeming interaction meant as a chance to catch our breath between breath-snatching song-and-dance sequences into something awe-inspiring in its own right. It isn’t exactly what we talk about when we talk about movie magic, but it feels magical all the same.

How appropriate, then, that this particular scene ends with the heat of confrontation, a sting that “In the Heights” manages to carry into the colorful frenzy of what comes next, one of the film’s many standout musical numbers at a crowded nighttime fiesta. We’ve become accustomed, by this point in the movie, to the soul-infusing vigor coating every delectable sing-speak lyric and hypnotizing twirl when the rhythms of “In the Heights” pick back up. But some of this extravaganza’s most electrifying moments come in the transitions in and out of those numbers—in those storytelling joints are where we locate the heartbreak, the passion, the crackle of catharsis. In a movie which asserts there’s no place more important than the place we’re in right now, these are the points where dreams diverge.

At once a joyful celebration of community, a tribute to recognizing our origins and a strong reminder about how a little patience can reap wonderful rewards, “In the Heights” more than makes up for a year without big emotions on the big screen. Leave it up to our narrator and protagonist, Usnavi (Anthony Ramos, who should be a household name going forward), to grant the movie its wholly endearing foundations with one of his first lines: “Once upon a time, in a faraway land called Nueva York….”

While it unfolds along a few blocks of Washington Heights, a predominantly Dominican New York City neighborhood, you’d be forgiven for thinking “In the Heights” traverses the entire world. Such is the effect of director Jon M. Chu, who applies that controlled elation for grandiosity which underscored the best parts of “Crazy Rich Asians” across nearly all 143 minutes of this adaptation of Lin-Manuel Miranda and Quiara Alegría Hudes’s hit stage show of the same name (Hudes is the credited screenwriter).

Chances are you’ve seen similar messages touted by both promoters and critics that “In the Heights” marks the best reason yet to return to theaters as the COVID-19 threat wanes. Mark me down as a co-signer. Apologies if you were looking for a contrarian opinion; you won’t find it here. The first minutes cast a euphoric spell as Usnavi skips to the beat of a sprinkler’s water blasts and a key’s jingle before erupting into a movie-opening anthem that has all the virtuosity of a finale. Powered by Alice Brooks’s soaring cinematography, Chu’s made-for-the-biggest-crowds flair and Miranda’s penchant for intertwining narrative with deliriously fast-moving music, that first song sets the stage for who we’ll follow in this tight-knit community while establishing a benchmark for how high our own spirits will fly over the next two hours. Would you believe that the film’s spell only gets stronger from here?

At the same time, there’s a healthy irony to how Chu’s film represents a sentiment of moving forward while throwing it back to the days of massive dance numbers and an eager commitment on the part of a movie to out-do itself. In terms of recent live-action Hollywood musicals, “In the Heights” brings with it the genre’s heaviest expectations since “La La Land,” though the sensation it most confidently evokes isn’t the dream-like swoon of Damien Chazelle’s movie but a raw immediacy we can attribute to its on-stage roots. It may be traditional in its ambitions, but its story is utterly contemporary, cross-stitched via a carousel of characters we come to be mostly invested in across the board (although juggling those subplots threatens to burst the seams in a few spots).

Principal among these multicultural Washington Heights denizens is Usnavi, who aspires to return to the Dominican Republic to bring the family’s beach-side bar back to its former glory, though doing so will mean uprooting himself from the streets and sidewalks and bodega that he seems so metaphysically tied to. His leaving would also mean surrendering a potential chance at romance with Vanessa (Melissa Barrera), a local artist desperate for a burst of inspiration to occupy her hands with something other than scissors and customers’ hair at the corner barbershop. The story’s grander implications will reliably advance in close stride alongside Usnavi and Vanessa’s cute flirtations, until their relationship becomes one with the story surrounding them.

Returning home, meanwhile, is Leslie Grace’s Nina, whose first steps as a first-generation college student have her wondering whether she ever should have left Washington Heights to begin with, although her father, Kevin (Jimmy Smits, wonderfully balancing warmth and prickliness as always), might have something to say about his own financial investment in his daughter’s future. Nina’s off-and-on boyfriend, Benny (Corey Hawkins), has his own thoughts about reaching for stars which may be dimmer than they appear. This is not a movie of world-ending schemes or post-apocalyptic scenarios (heck, the closest thing it offers to a villain is a Mister Softee franchisee stealing business from Miranda’s piragua vendor), but the proximity of dreams has its own way of giving the most personal stories a jolt of cataclysm.

This is the air that fills “In the Heights’s” dramatic lungs. It’s the reason you can pick any verse from either the mighty impressive sequence at a community pool or the captivating solo soliloquy of Usnavi’s abuela and find that, for all the infectious goodwill that ripples through the individuals who bind this neighborhood together, what comes next isn’t a one-size-fits-all journey. Dreams don’t arrive on the same schedules, after all, nor take us to the same place. We may not even yet see our sueñitos for what they will be once realized.

So what can we see in Chu and Miranda’s vision of an ostensibly small, Latino-centric community? We see a kaleidoscopic portrait of a culture which has blended past and present with steadfast hopes for what’s to come, fueled by a history whose faces are painted on Washington Heights’s walls and whose triumphs are heard in the songs filling its streets.

We see aspirations, comforts, familiarity and family, as well as a population broadly getting its due on a Hollywood canvas of this size and a movie that makes a damn good case for why that rarity should perhaps not be so rare anymore.

We see musical moments bursting with such swagger and flavor that it’s no wonder a glint seems to materialize on the edges of the frame when “In the Heights” swells to its artistic and emotional peaks, even as its shoddy attempts at more explicit political consequence betrays an impulse to connect directly with the headlines.

We see a foot-stomping determination to endure, if not upward then forward, as Usnavi laments that “our block is disappearing” to the ceaseless tides of change. Ramos’s eyes shine with such a homegrown earnestness that we can’t help but believe him; his performance as a young Latino tugged between life’s chaotic rhythms is remarkably dynamic, and one of the very best of the year thus far.

Most of all, we see a movie lit up by the purity of its beaming elation, a story concocted as a diorama of stories which doesn’t for one moment take its own optimism for granted. There’s no exaggeration on the part of Chu and his collaborators here—only a bulletproof sincerity that manages to remain upright when the ground starts shaking with the force of a million sueñitos. Find the biggest screen in town and sit down for “In the Heights” and, perhaps for the first time in several months or even a year, in the heights is exactly where you may come to find yourself.

"In the Heights" is rated PG-13 for some language and suggestive references. It's available in theaters as well as on HBO Max now.