Maisie Crow, currently the editor-in-chief of multiple Texas newspapers, returned to the filmmaking space with a timely portrait of border region complexities. 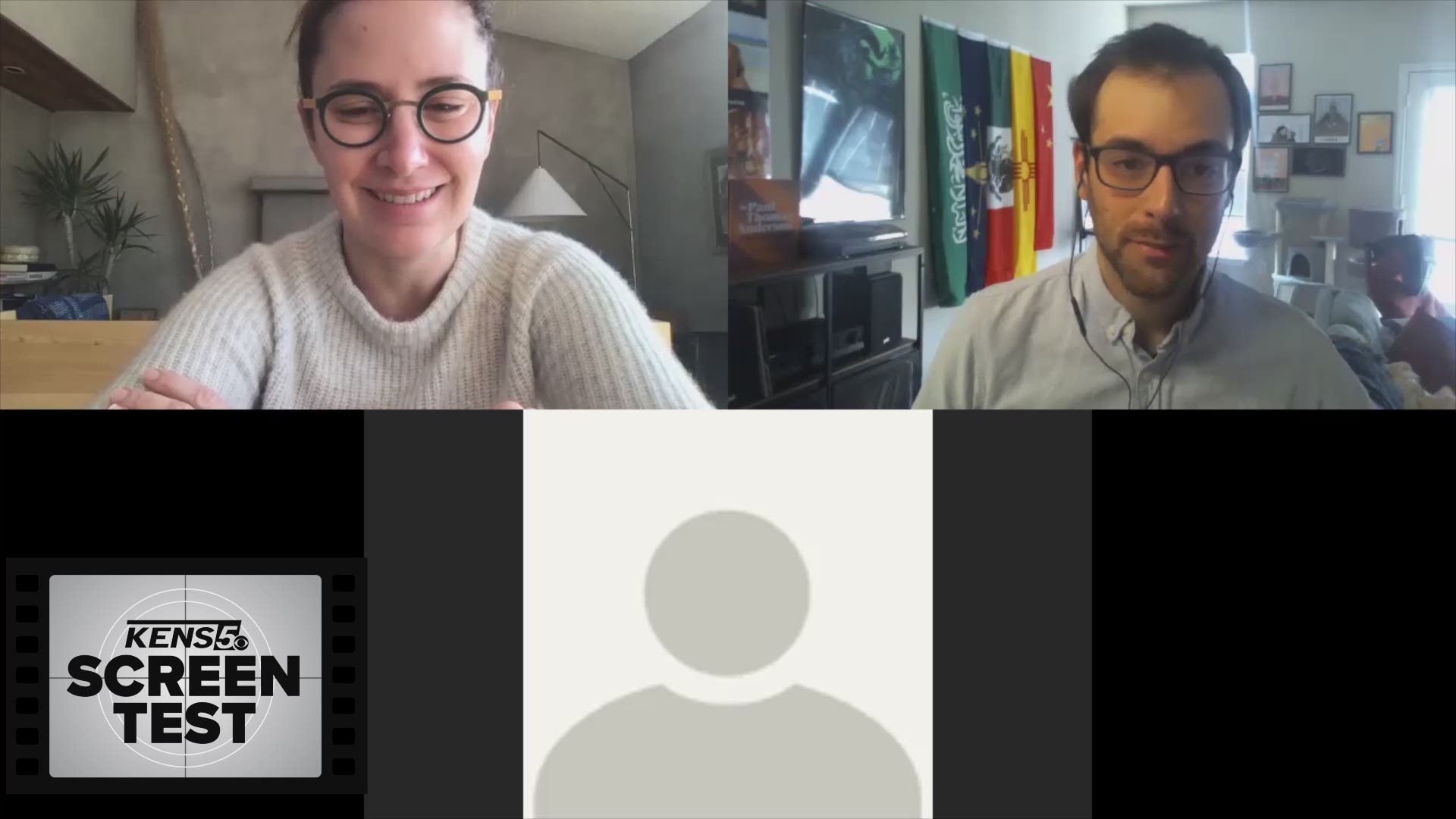 SAN ANTONIO — Having ventured east to chronicle the story of Mississippi’s lone operating abortion clinic in the 2016 documentary “Jackson,” Maisie Crow – a Texas-born storyteller – focused her sights on her home state for her follow-up feature, “At the Ready.” In the documentary, which premiered at this year’s Sundance Film Festival, Crow once again captures the intersection of the political and the personal through the eyes of three El Paso high school seniors who are receiving an early education in law enforcement tactics.

At the same time – and largely outside their purview at Horizon High School – migrants are being detained at the border just a few miles away, agents with Border Patrol and Immigration and Customs Enforcement are being criticized for their policies, and national leaders are harmfully generalizing Mexican immigrants as murderers and rapists. Eventually, the political reverberations send tremors through the lives of young Christina, Mason and Cesar—each of them Mexican-Americans who aspire to join the ranks of local law enforcement.

In the below interview with KENS 5 Film Critic David Lynch, Crow discusses the process of getting to know the teens, telling their stories at the most personal level and the journalistic instincts she brings to her films.

(This interview has been edited for clarity.)

David Lynch: Between this and “Jackson,” you’ve directed two full-length documentaries that are not only topical in their subject matter but, while you’re shooting them, they end up being particularly newsworthy. Is that a product of good planning or luck?

Maisie Crow: I think a little bit of both. As a journalist, I start my morning reading The New York Times and The Washington Post, and then I run to local newspapers down here in west Texas. So I am always kind of trying to focus on films and dive in to the people who are being affected by larger issues. So in that sense, I tend to get into issues that are being discussed at the national level.

Lynch: Who do you talk to first in the early stages of a documentary like this that is inevitably going to end up taking on some political conversations? Do you talk to the kids first, the law enforcement instructors at Horizon High School, the families?

Crow: With anything like this, it’s being in the community and just getting a sense of the place and the people that live there. I mean, I met so many people in the course of making this film and researching this film. So it’s kind of a scattershot approach, I guess, in terms of meeting people and speaking with them before I even start filming.

Lynch: So how long does that phase of planning and talking to people go before you start rolling the cameras?

Lynch: Did you ever encounter any pushback from anyone while filming a certain conversation or a certain moment?

Crow: No, and I think that’s because my approach to filmmaking is very much trying to look at whatever issue through the eyes of the person that I’m filming. So I’m not ever trying to push someone in the direction that they wouldn’t go naturally. So, no, people have been very open and very willing to talk to me.

Lynch: The whole thing takes a fly-on-the-wall approach, pretty generally. I found it interesting that when you’re talking to these three kids at Horizon High School, when they’re talking about the main reason they’re interested in getting into law enforcement, the main thing that seems to come up first is just the potential of a good-paying job. What was your takeaway on that?

Crow: I think that in any circumstance, and in particular when you’ve potentially grown up without a middle-class income, I think that’s important. I think people want jobs where they feel like they’re being paid fairly. I think that’s why we have a discussion going on right now nationwide about a $15 minimum wage, which I don’t think is unreasonable. So of course, I think in the U.S. right now, like, it’s totally…to me, it’s not surprising at all that someone would be considering the salary options of the job that they’re looking at.

Lynch: There’s a moment in the documentary where one of the subjects you’re talking to reveals something intensely personal. And they go on to say that they haven’t revealed it to anyone else. In that kind of moment, what new responsibility does that put on you, and/or does it change your approach to the story?

Crow: Are you referring to Mason?

Crow: Yeah, the first time Mason told me about his sexuality, we were leaving a football game. I had already shut off the camera and we were talking and he just was like, “You know I’m gay.” And I was like (shakes head), “No, I didn’t know that,” but I also hadn’t really…my head didn’t go there, I wasn’t thinking about that. And he specifically told me that he brought it up because that was a really big struggle of his, was trying to find a support system. And a support system that supported him for who he is. And we talked about that a lot, and because at the time he wasn’t out to anybody, I went back so many times and was like, “Are you sure you’re OK with this? Do you want this to be in the film? This very much needs to be an open discussion between the two of us.” And so, you know, with sensitive information like that, it’s always something that I want to make sure the person who’s participating in the film is willing to share.

Lynch: Your last full-length documentary, “Jackson,” took you all the way to Mississippi. Seeing as you’re based in Marfa, with this story being much closer to you – a day’s drive away, practically – does that make this project more personal to you? And if so, does that make it harder in any way?

Lynch: I’m interested, given your background as a journalist, to chat with you about this blossoming conversation we’ve had over the past four or five years – but definitely over the last year, I think – about objectivity in journalism and what that entails; how that might be different now, how maybe it’s always been different but maybe some of us just haven’t realized it. In a story like this, how do you stay objective, or is objectivity even the top priority?

Crow: For me, it’s not a matter of objective or not. Because I’m looking through the eyes of the students, so I’m not seeking to tell (signals air quotes) both sides of the story. I’m really aiming to share with viewers the experience of these individuals. And so, with every scene that we put in the film, it was a conversation of “What does this add to the individual experience?” I think that when I have critics of my storytelling, it’s because they want me to tell them…they want to, like, ensure that the people watching the film are going to have an answer and be told what to think. And I have no interest in that. I don’t find that to be productive. I don’t consider myself an advocate; I consider myself a journalist. And so I want to lay bare what I’m seeing and share that with the world. I just don’t find it productive to force my own opinions on anyone.

Lynch: When you’re in the process of getting yourself in their headspace to get their perspective, and maybe from there branching out to other people, does that lead to any kind of vulnerability on your part?

Crow: No, I don’t feel uncomfortable with anything if I have a camera in front of me. I mean, yeah, if I don’t have a camera in front of me, I think I do become more, um (pauses) more reserved. It’s like, if I am out in the world encompassing my role as a journalist, there’s really no situation that I feel uncomfortable going into, or vulnerable. I mean, I do think that being a petite female at times has made it more difficult for me because I think no one – not no one – but I’ve encountered a lot of people that don’t take me seriously. And that’s their own issue. But it can become challenging when thus I’m not granted access because they think I’m, you know, all the time I get asked like, “Oh, are you in high school, are you making a film for your high school film class?” And I’m like, “No, I’m 39,” you know? It’s kind of crazy.

Lynch: You’re the editor-in-chief of the Big Bend Sentinel and also Presidio newspapers, and if I’m not mistaken you also have a background as a photojournalist…

Lynch: Were either “Jackson” or “At the Ready” (initially) conceived as a story for a different medium, and if so, how do you make the switch to, “Let’s make this a full-length documentary movie”?

Lynch: At the end of “At the Ready” we have a little epilogue where you revisit your three subjects some months later. What happens during the span of that time—do you chat with them at all during that time? Do you even tell them ahead of time that you plan on doing this rendezvous with them after some months?

Crow: Once I really bonded with someone and decided that they were going to play a main role in the film, it’s always an evolving conversation. It’s not like, “Oh I stop filming at graduation and then we don’t talk for six months.” It’s always evolving. And I don’t think you’re ever really certain that you’re going to be done until you’re done, you know? So in making the film, it wasn’t like, “OK, now I’m going to go get these six-months-later ending pieces.” It just, it happened that way because when you graduate from high school I think the push into adulthood just happens so fast, and so a lot happens over those months.