Sissy was born in Corpus Christi in 1926 and spent her life working for equal rights and social justice. 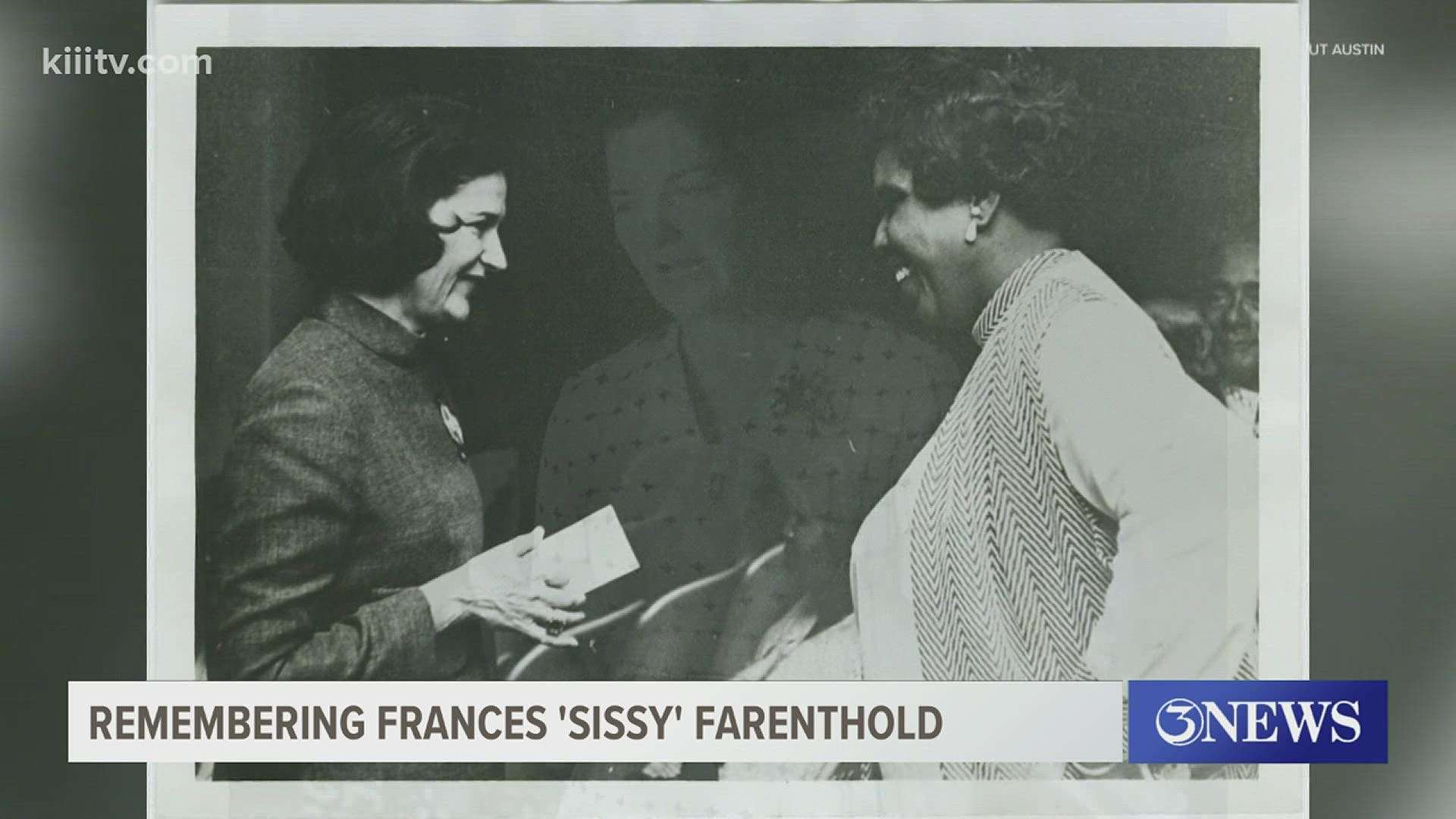 CORPUS CHRISTI, Texas — A local trailblazer in civil rights died over the weekend after a long battle with Parkinson's disease.

Sissy was born in Corpus Christi in 1926 and spent her life working for equal rights and social justice.

In 1968, Sissy was elected as the only woman in the 150-member Texas House of Representatives, where her priorities included civil rights, raising the spending cap for welfare recipients, and protecting Corpus Christi’s bays and estuaries.

Credit: University of at Austin School of Law

According to her online bio from the University of Texas, she graduated from high school in Dallas, then Vassar College at the age of 19.  Three years later, she'd graduate from UT law school and return to Corpus Christi to practice law at her father's firm.

She married George Edward Farenthold. Together, they had five children. She stopped practicing law to raise their kids, but returned to it in 1965 as the director of Nueces County Legal Aid Program, where she was exposed to the challenges facing Mexican-American women and children in South Texas.

While a member of the Texas House, she fought for civil rights and economic opportunity for poor women and children.  She was a co-sponsor of the Texas Equal Rights Amendment, which was approved by voters in 1972.

She would eventually run for governor of Texas in 1972, beating two candidates, including the incumbent, and advance to a primary runoff, where she was defeated by Dolph Briscoe.

The run for governor launched her into the national spotlight. Her name was placed on the nomination list for vice president by the Democratic National Convention in 1972.  She would eventually withdraw in favor of U.S. Sen. Thomas Eagleton.

Farenthold lived in Houston from 1973-1975 and taught at Texas Southern University School of Law.  After that, she was president of Wells College in Aurora, New York.

She would return to Houston to start a law practice and teach a course in sex-based discrimination law at the University of Houston.

Throughout her career, Farenthold was also active in human rights and social justice.

You can read more about Farenthold's life here.

"Frances "Sissy" Farenthold's life was an inspiration to women, people of color, and the powerless. She came from a privileged upbringing but possessed a sincere desire and ability to connect with Texans from all walks of life. Sissy believed that every person deserved to be treated fairly regardless of where they were born, their gender, or the color of their skin.

"She was a dogged defender of civil rights and a fierce advocate for women in public office. I will always admire her courage to campaign for the Texas House of Representatives and run twice for governor at a time when women did not run for public office. She won against the odds, and in 1968, she was the only woman serving in the Texas House. Sissy never allowed a male-dominated legislative body to discourage her from using her voice and intelligence to make a difference in the lives of all Texans.

"Now more than ever, Texas needs leaders who can unite rather than divide us and who dare to fight for abortion rights, voting access, the poor, and families and children.

"I will miss Sissy Farenthold. There will never be another like her."

Saddened by the loss of trailblazer Sissy Farenthold. Sissy showed us that you can change Texas with righteous anger and unflappable ethics. She stood by me from the very beginning. I’ll miss her and feel lucky to have met her. pic.twitter.com/q0kmkeCX0J

Below is more about Sissy in an obituary written by family

Frances Tarlton “Sissy” Farenthold died peacefully at home in Houston, surrounded by family and loving caregivers, on September 26, 2021 after a long battle with Parkinson’s disease. She was six days shy of her 95th birthday.

Sissy Farenthold was born in Corpus Christi, Texas on October 2, 1926. She was the daughter of Catherine “Catty” Bluntzer and Benjamin Dudley Tarlton Jr., an accomplished attorney and campaigner for social justice. Farenthold was heir to several of South Texas’ prominent settler families. Throughout her life, she exhibited their spirit of determination, defiance and fortitude.

Sissy attended Corpus Christi High School, then graduated from The Hockaday School, Vassar College (at 19) and, in 1949, The University of Texas School of Law (at 22). The University of Texas Law library is named in honor of her grandfather, Benjamin Dudley Tarlton. At a time when a legal career was unusual for a woman, Sissy was the successor to her family’s legacy of legal advocacy and progressive politics.

In 1950, Sissy married Georges Edward Farenthold, a Belgian-born immigrant, linguist, and Army Air Corps veteran of World War II. During the early years of her marriage, Sissy enjoyed a hiatus from her profession, giving birth to five children in five years. She couldn’t resist the lure of the law for long, however, and in the early 1960s she accepted a series of appointments and jobs, serving on the Corpus Christi (Roman Catholic) Deanery and the Corpus Christi Human Relations Commission, and as director of Nueces County Legal Aid. She also fought a legal battle to protect unobstructed shoreline views in Corpus Christi, helping to establish the Organization for the Protection of an Unblemished Shoreline.

In 1968, Sissy was invited by a group of friends and local activists to run in the local Democratic primary for the Texas State Legislature. She triumphed; and that fall, Sissy was elected as the only woman in the 150-member Texas House of Representatives.

In the Texas House, Sissy’s legislative priorities included civil rights, raising the spending cap for welfare recipients, and protecting Corpus Christi’s bays and estuaries. She attributed these first two commitments to the needs she saw as a lawyer with Nueces County Legal Aid, where she mostly represented poor Mexican-American women. While in the legislature, Sissy successfully sponsored the Texas Equal Rights Amendment. She held a 100% voting record from the AFL-CIO Committee on Public Education (COPE).

Perhaps Sissy’s biggest impact as a legislator came with her dogged pursuit of the investigation of the Sharpstown Scandal—a sordid collection of government corruption crimes by powerful Democrats. Her insistence on transparency and her fight against special interests ended the careers of many Texas politicians, including the Speaker of the House, Gus Mutscher.

In 1972, Sissy continued to pursue anti-corruption and many of her other priorities by running for governor. In the Democratic primary, she made it into a runoff, defeating incumbent Governor Preston Smith and Lt. Governor Ben Barnes. Eventually, she lost a close runoff election to rancher and banker Dolph Briscoe, and in the meantime, became the national face of Texas progressives for more than a generation.

At the 1972 Democratic National Convention in Miami, where Sissy led the anti-war McGovern forces from Texas, she was tapped as a potential vice-presidential running mate for McGovern. Gloria Steinem nominated her from the floor, seconded by Fannie Lou Hamer and former U.S. Rep. Allard Lowenstein. Although Sissy came in second, she was the first woman whose nomination for that position had ever been brought to a floor vote. Perhaps it was this, and her outspokenness, that earned Sissy a place on Nixon’s Enemies List—twice.

In 1973, Sissy became the first chair of the bipartisan National Women’s Political Caucus, whose mission was to recruit women for public office. She made Houston her home base until, in 1976, she became the first woman president of Wells College (then a women’s college, founded by Henry Wells of Wells Fargo fame) in Aurora, New York. Her presence is still felt on the campus, including at the Frances Tarlton Farenthold Athletic Wing that was built during her tenure.

When Sissy was at Wells, she and two friends created the bipartisan Public Leadership Education Network (PLEN) to encourage college-aged women to embark on lives of public service. The organization continues today.

In 1980, Sissy returned to Houston. The scope of her politics broadened, as she increasingly brought her attention to international activism. She joined the board of directors of the Helsinki Watch Committee, precursor of Human Rights Watch; and alongside her cousin Genevieve Vaughan, Sissy led protests against apartheid in South Africa and against nuclear proliferation. She helped organize the Peace Tent at the 1985 NGO Forum in Nairobi, held concurrently with the Third U.N. Conference for Women; and embarked upon peace and human rights missions throughout Central America, Asia, and the Middle East. She traveled to Rio de Janeiro for the worldwide Environmental Summit in June of 1992.

Sissy taught law at the Thurgood Marshall Law School at Texas Southern University, where her students included future U.S. Rep. Al Green; and at the University of Houston, where she taught one of the nation’s first classes on sex-based discrimination.

Sissy proudly served as the chair of the board of the Institute for Policy Studies in Washington; and of the interfaith Rothko Chapel in Houston, “a sea of humanism,” as she called it, with which she was involved for forty years. She also served on the advisory board of the Bernard and Audre Rapoport Center for Human Rights and Justice at The University of Texas School of Law. Sissy had countless friends and collaborators around the world from her more than sixty years of activism, a number of whom established the Frances Tarlton “Sissy” Farenthold Endowed Lecture Series in Peace, Social Justice, and Human Rights, co-presented each year by the Rapoport Center and the Rothko Chapel.

In 2009, Sissy was the executive producer of Quest for Honor, a documentary that premiered at the Sundance Film Festival. It was short-listed for an Academy Award for best documentary.

To her family and friends, Sissy was the personification of righteousness, compassion, and justice. She is irreplaceable.

Burial is private. A public, in-person memorial will be held at The University of Texas School of Law at a later date, depending upon public health conditions.

For additional information and films about Sissy’s life and career, please visit https://law.utexas.edu/Farenthold. In lieu of flowers, the family requests donations be made to the Sissy Farenthold Fund for Peace and Social Justice at the Rapoport Center, through this link: http://www.utlsf.org/farenthold. The fund will continue Sissy’s legacy by sponsoring academic, advocacy, and creative work on a broad range of issues to which she was committed, including peace, environmental justice, and reproductive and sexual rights. 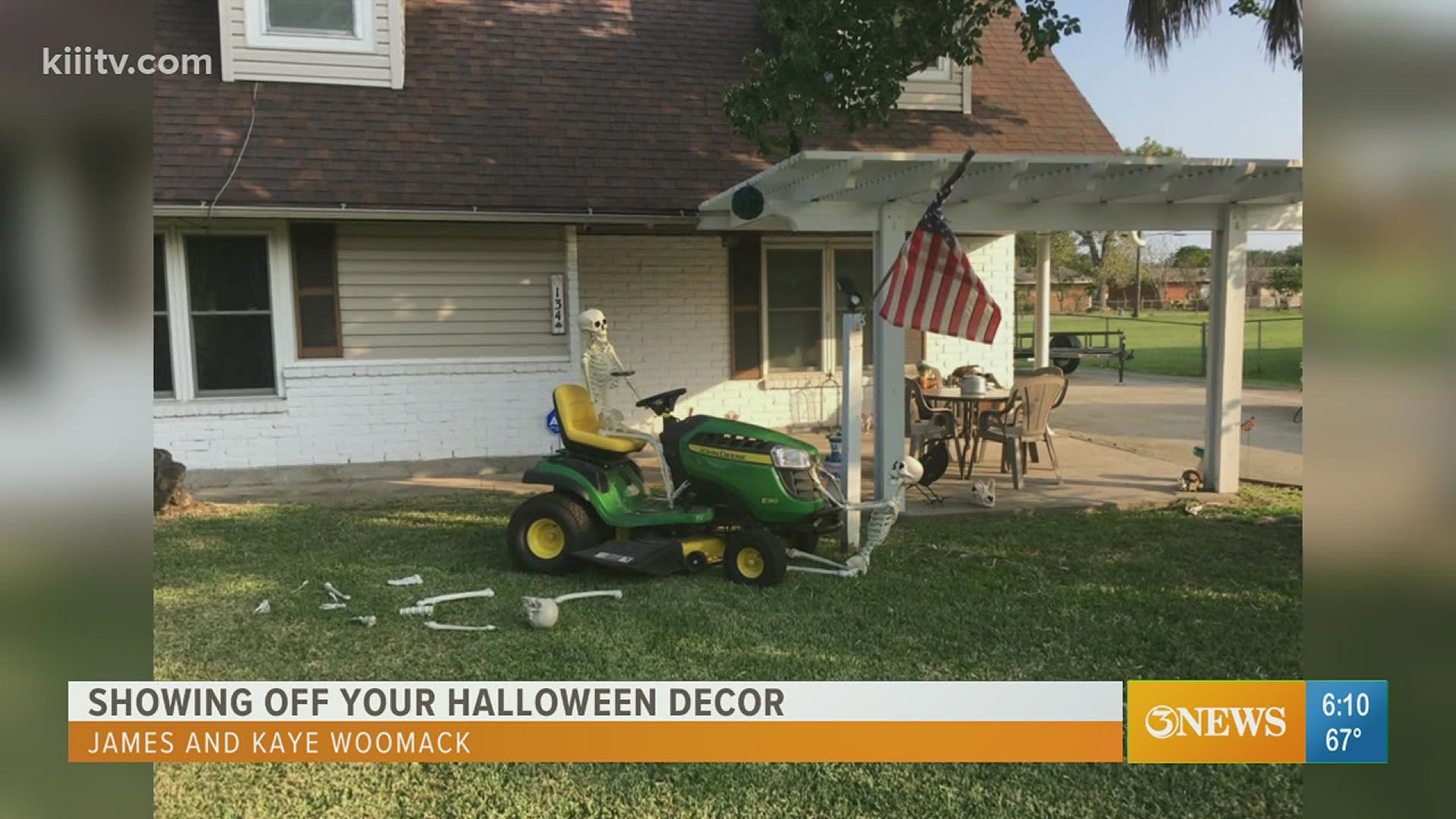 Showing off your Halloween decor