The happy homecoming met with plenty of hugs and tears of joy. 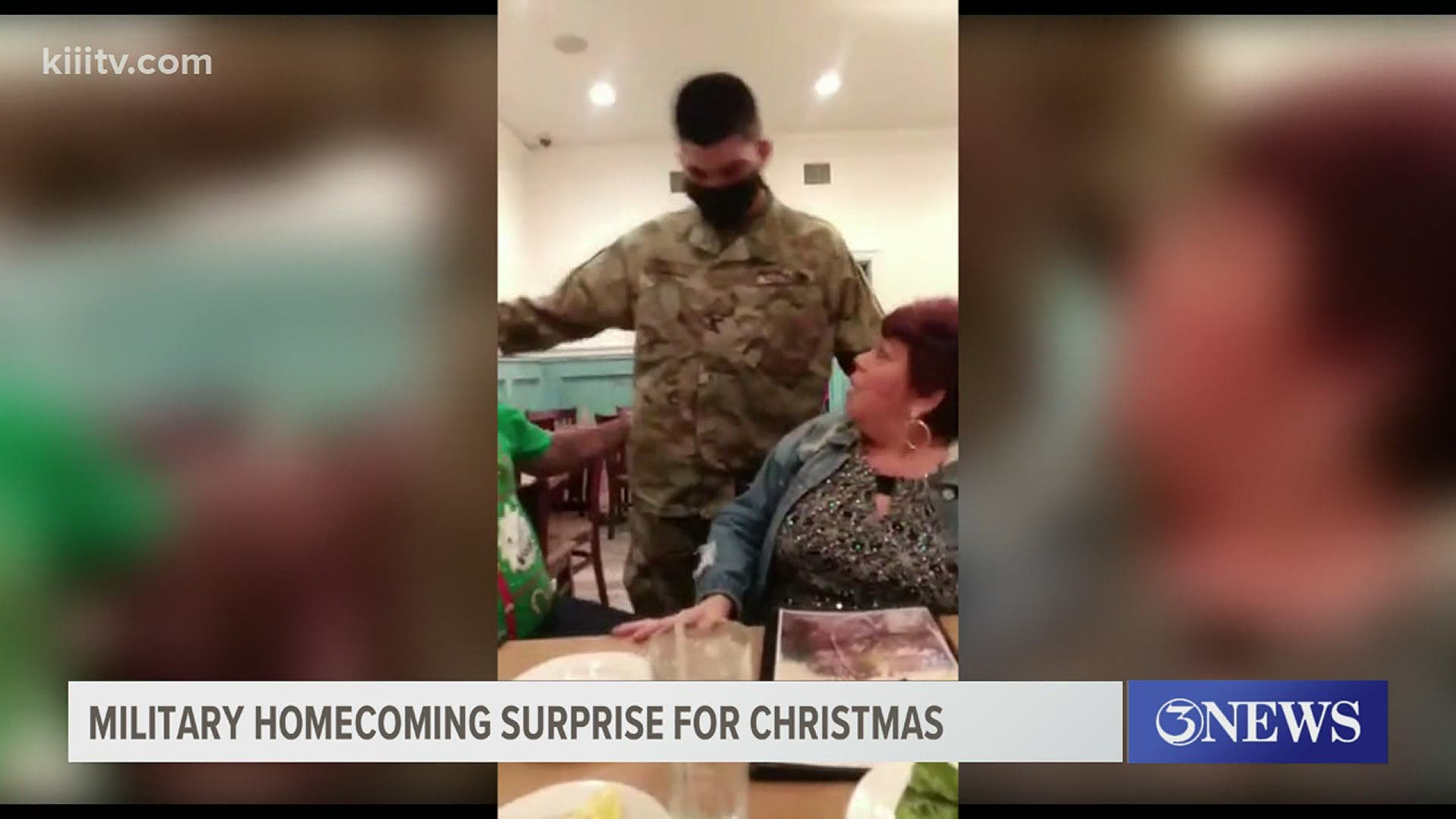 CORPUS CHRISTI, Texas — A Corpus Christi soldier ended up giving his grandmother the ultimate gift by pulling off a Christmas homecoming surprise and the joyful moment was all caught on video.

It was the moment she had been praying for. Her grandson, private first-class Isaiah Flores walked up to his grandmother for the first time in a long time.

The happy homecoming met with plenty of hugs and tears of joy as he surprised his family just in time for Christmas.

"I was in shock because I didn't expect him. I just looked at him and I thought I was dreaming," said Hernandez-Paz.

She had no idea her grandson would be coming home for the holidays.

The big reveal happed as the family sat down for dinner this week at U and I restaurant.

Operation: Christmas Surprise was all orchestrated by Sylvia's son in law Peter and her daughter Jackie.

"We were sitting there getting ready to order, and my son in law says mom we have a little Christmas gift for you. It's not much, but that is what we could afford. I said son I don't care what it is. I will love it and he showed up," said Hernandez-Paz.

"The whole time I was nervous. I didn't know what to say! I just walked up and tapped her and said Hi," said private first-class Isaiah Flores.

Sylvia said it was the best gift she could have received. Her emotional reaction even taking the Army soldier by surprise!

"I was like oh my God! I didn't expect that," said Flores.

"We were at the restaurant and I kept touching his leg, mijo you are really here," said Hernandez-Paz.

He said it wasn't his original intention to join the Army.

"Originally I took my friend because he was enlisting. I was taking him to take his military test, kept having to take him back, one day I decided to go in."

From there he was hooked, knowing the benefits that come with a military career which includes financial help to pay for college.

Now on leave for the holidays, Flores is back in the arms of his loved ones.

"It's only been 4 months, but even then, it feels like forever half of it didn't get to call or text them through basic. It means a lot to be here with my family and give everybody their presents, that they all hope they like," said Flores.

Flores said it feels good to be home. While on leave for the holidays, he plans to catch up with his family and a few of his favorite South Texas foods.