Is your partner always on their phone? Here's what a psychologist says you should do to change that

"We don't want to be saying, being on your phone this much is wrong," said Dr. Jessica Rohr. "It's not necessarily that there's a good or bad amount." 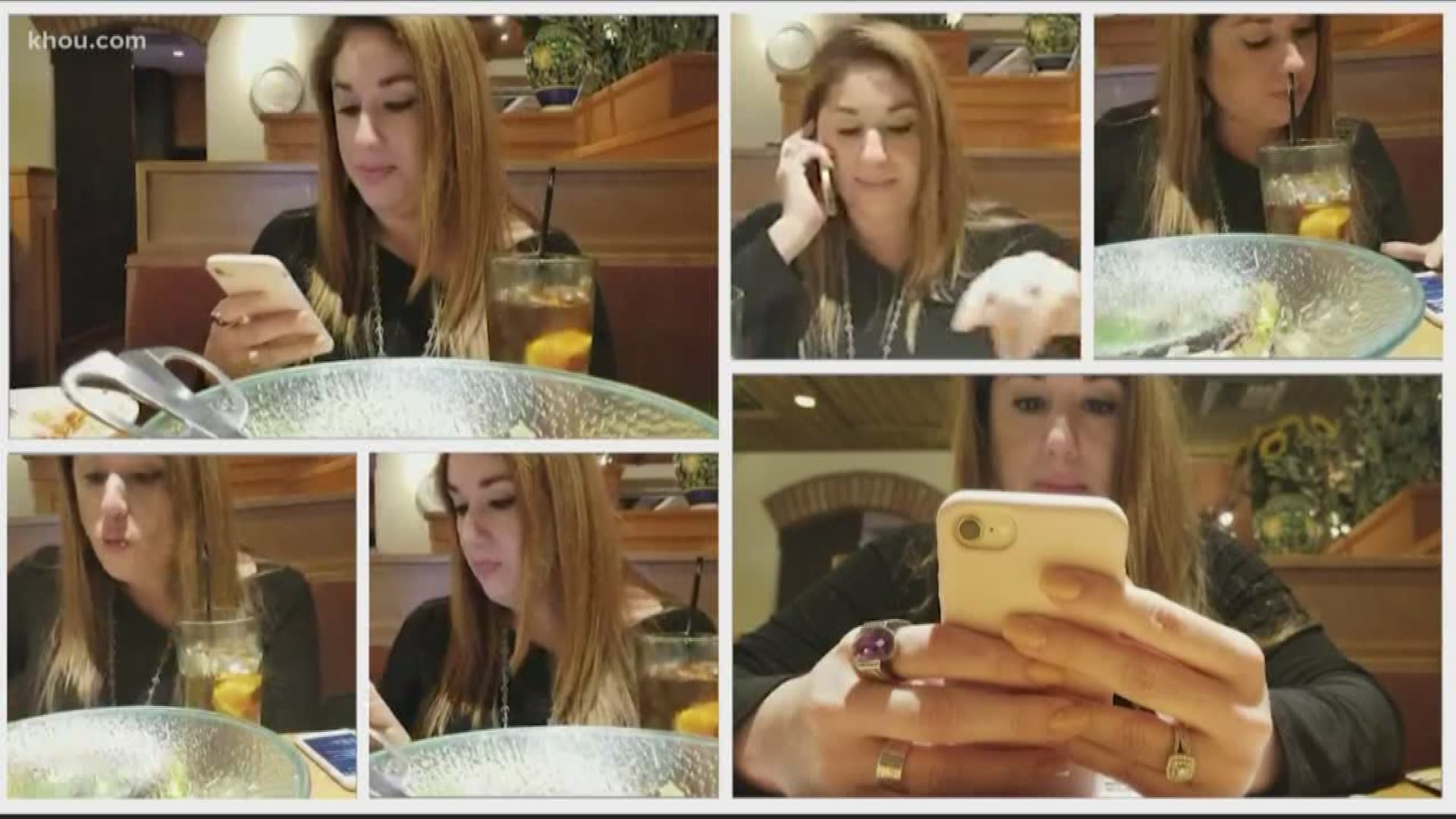 HOUSTON — Are you getting ready to celebrate Valentine's Day?

If you're still mulling around gift ideas or dinner locations, we can help you by sharing this: a dozen roses and a dozen text messages are not the same thing, no matter how many emojis or cute GIFs you use.

And if you don't believe us, listen to Myra and Fabian Lara. The Houston couple is celebrating their third year of marriage this week.

"My wife has a problem with her cellphone," Fabian Lara said as he used his cellphone to record his wife on her phone. "She won’t get off it. So every chance I get to record her while she’s on her phone, I do."

Whether Myra Lara is in a room full of people, or on a dinner date with her husband, chances are Fabian Lara is annoyed.

"As soon as she gets on her phone, she’s not in the moment that I’m in," Fabian Lara said. "And I actually want her to enjoy the moment with me, without having to be stuck to a screen."

Even during the interview with KHOU 11, Myra Lara's cellphone was a few inches from her lap.

"It’s just a natural reaction for everyone to grab their phone," Myra Lara said. "Last week, I went to dinner with my girlfriends, and there was a point in the conversation where everybody had their phones up and it was silent. And I remember thinking, oh gosh. Like, this is not good."

Before you have an argument with your partner, know this: The phone is not bad. Psychologist Jessica Rohr said it's all about boundaries.

"The research is new, but we do know that the issues with cellphones that impact relationships are always around quantity of messaging and calls," Dr. Rohr said.

It's true. The Laras love to attend concerts. But no matter if it's Lionel Richie or Fleetwood Mac, "I have to tell Myra, get off your phone. She says, well I want to put it on Snapchat. I say, nobody cares. They’re just going to look at it and move on. I say, just enjoy the concert. That’s what we’re here for."

But other than complain, the Laras haven't done much to change their cellphone behavior.

"So every couple may have a different level of expectations for cellphone use."

There is not a one-size-fits-all amount of acceptable screen time, which makes the conversation specific to your own relationship.

"We don’t want to be saying, being on your phone this much is wrong. But what you can say is, when you look at your phone when I’m talking to you, it makes me feel really sad," Dr. Rohr said. "It makes me feel unimportant, like you don’t care about me. So being comfortable sharing your feelings and being vulnerable that way is important."

As a couple, you can agree that dinner will be a "no-phone" zone, or that you won't screen and share while out on a date.

But don't totally discredit the positive influence technology has on our intimate relationships.

"We know that 70 percent of Americans that use cellphones, who are partnered, check in with each other once a day," Dr. Rohr said.

Bottom line, boundaries and balance are best if you want to keep the romance alive.

RELATED: Secretly Stalked: Your ex could be watching everything you do on your phone

RELATED: Healthy fighting: How couples can fight fair and keep the peace