As Monica Salinas was delivering food for an at-risk baby in Idaho, she stopped to say a prayer. That prayer was captured on the family's RING doorbell camera. 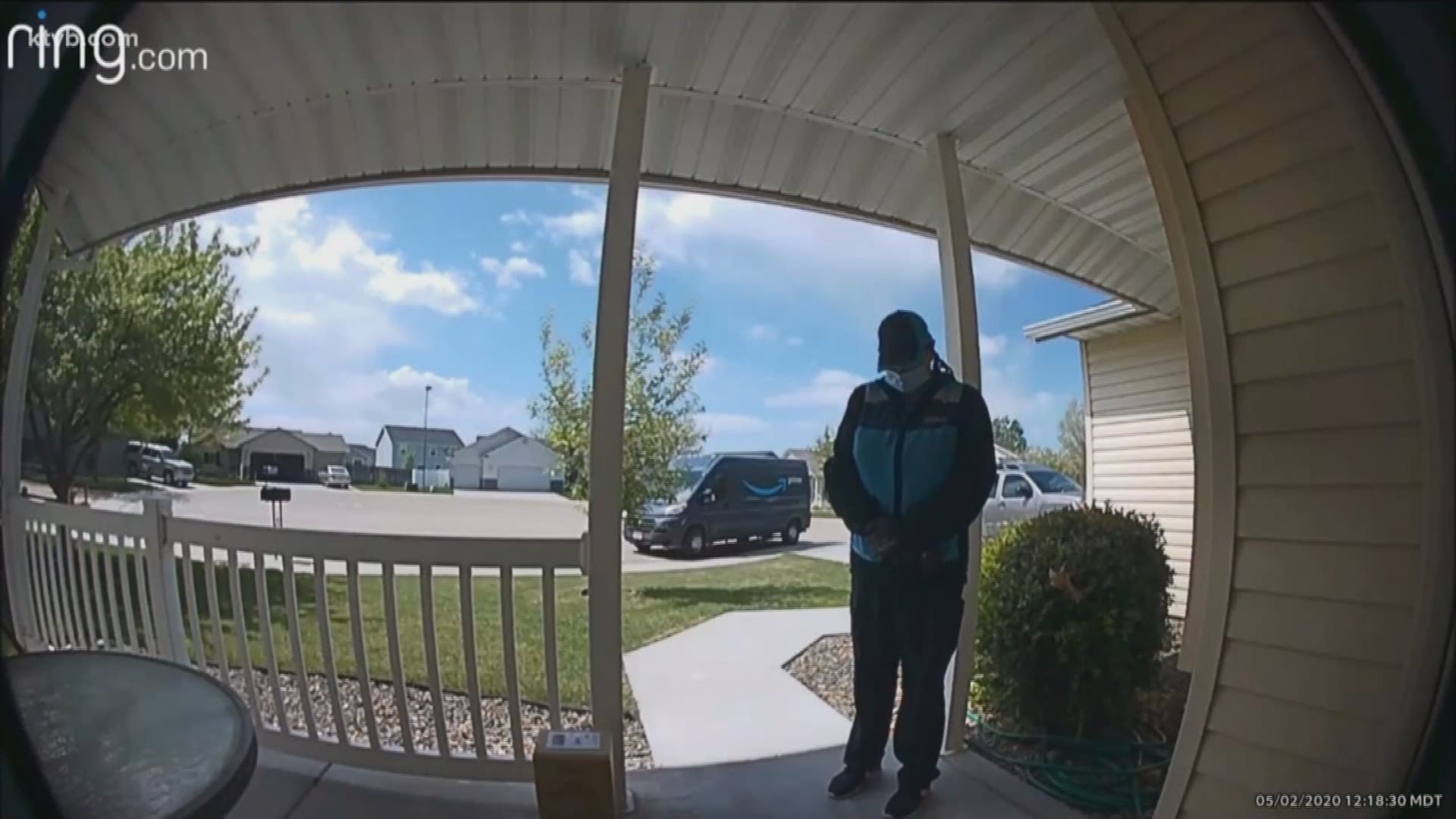 NAMPA, Idaho — Derek and Raquel Pearson live in Nampa with their eight month old baby, Lucas. They have been very proactive during the COVID-19 pandemic and have made every effort to stay home and stay safe.

The reason? Eight month old Lucas has a heart condition and difficulty eating. Derek Pearson said their doctors warned them that Lucas is more prone to respiratory distress if he contracts the virus.

“He needs special thickeners to be able to eat, otherwise he aspirates his milk, so we really depend on getting all of these supplies online so we don't have to go out to the store and bring a virus home,” Lucas’ mom Raquel Pearson said. “We just want to minimize exposure to coronavirus.”

Credit: The Pearson Family
Lucas Pearson has a heart condition, and eating difficulties. His parents say he is at-risk for severe respiratory issues if he contracts Covid-19, so they stay home as often as possible to keep him safe.

According to the Pearsons, we are all in this together.

“I just wish they understood how scared we are as parents, and how scared other people are,” Raquel Pearson said. “We really depend on them doing their part as well.”

A few weeks ago, Raquel Pearson was waiting on an important package that contained feeding supplies for Lucas. While waiting, she noticed something special about her Amazon delivery driver on her RING doorbell camera.

“I noticed that she was standing there, and I didn't really realize what she was doing until I saw her doing the sign of the cross. I was like 'Oh my gosh, she was praying',” Raquel Pearson said in awe. “So, I kind of choked up a bit. It's been really hard to get through this, so I'm really touched that a stranger would take time out of her day to wish our son well like that.”

Raquel Pearson immediately went and told her husband about the prayer that she spotted on video. He said he was overwhelmed with emotion.

“She had let me know that the delivery driver was doing a prayer for Lucas,” Derek Pearson said. “We have a sign on the door letting the delivery drivers know we have a high risk child, and we thank them for putting themselves out there in the mix every day. It just meant a lot that she took that time out of her busy day to pray, and send positive vibes to Lucas and our family. I was really touched by it.”

They posted the video on a local COVID-19 Facebook group.

“Then people recognized her, and then she reached out to us after she saw the post,” Raquel Pearson said.

Credit: The Pearson Family
The Pearsons posted the video of their Amazon delivery driver praying for their son on a local Covid-19 Facebook group, and it went viral.

That driver was Monica Salinas of Nampa. She was blown away by the reaction to the video on Facebook. Salinas said her phone just kept ringing, and text messages kept coming in.

“People just started blowing us up like crazy,” Salinas said. “They were like 'Did you stop and pray at a house?', and I was like yeah!”

Salinas delivers in Nampa for a company called Custom Services through Amazon. She says her customers are amazing.

“People leave notes to thank us for going on the front line, and those are the things we appreciate," Salinas said. "It's nice to be appreciated."

When the pandemic began, Salinas said she spotted a note on the front door of the Pearson's home.

“There was a note and it said their baby's food was essential, and every time I see that note, it just touches my heart,” Salinas said. “I just stopped to do what my heart told me to do, to say a prayer for the baby and for the parents, because that's got to be very painful for all of them to see their baby hurt and struggle. I just prayed that they can make it through another day, one day at a time.”

Salinas couldn’t believe all the comments on the video on Facebook. She said she was touched to see that so many people were impacted by her prayer.

Credit: Monica Salinas
Monica Salinas delivers packages for Amazon, she says she loves her job, and the families she delivers to.

“That makes me happy,” said Salinas. “Happy that God can touch people like that, you know?”

The Pearsons want to say “Thank You” to Salinas.

“It means a lot to our family, just genuine kindness. It's just a breath of fresh air to see stuff like that at a time like this, when people really need to come together now more than ever,” said Lucas’ dad Derek Pearson. “It's really powerful and we appreciate any positive energy that is sent to our family right now. So thank you so much, the gesture is really appreciated by myself and my family.”

See all of the heartwarming segments in our YouTube playlist here: