To remember the sacrifice made by their New York brothers and sisters, participants in San Antonio climbed to the top of the iconic Tower of the Americas...twice. 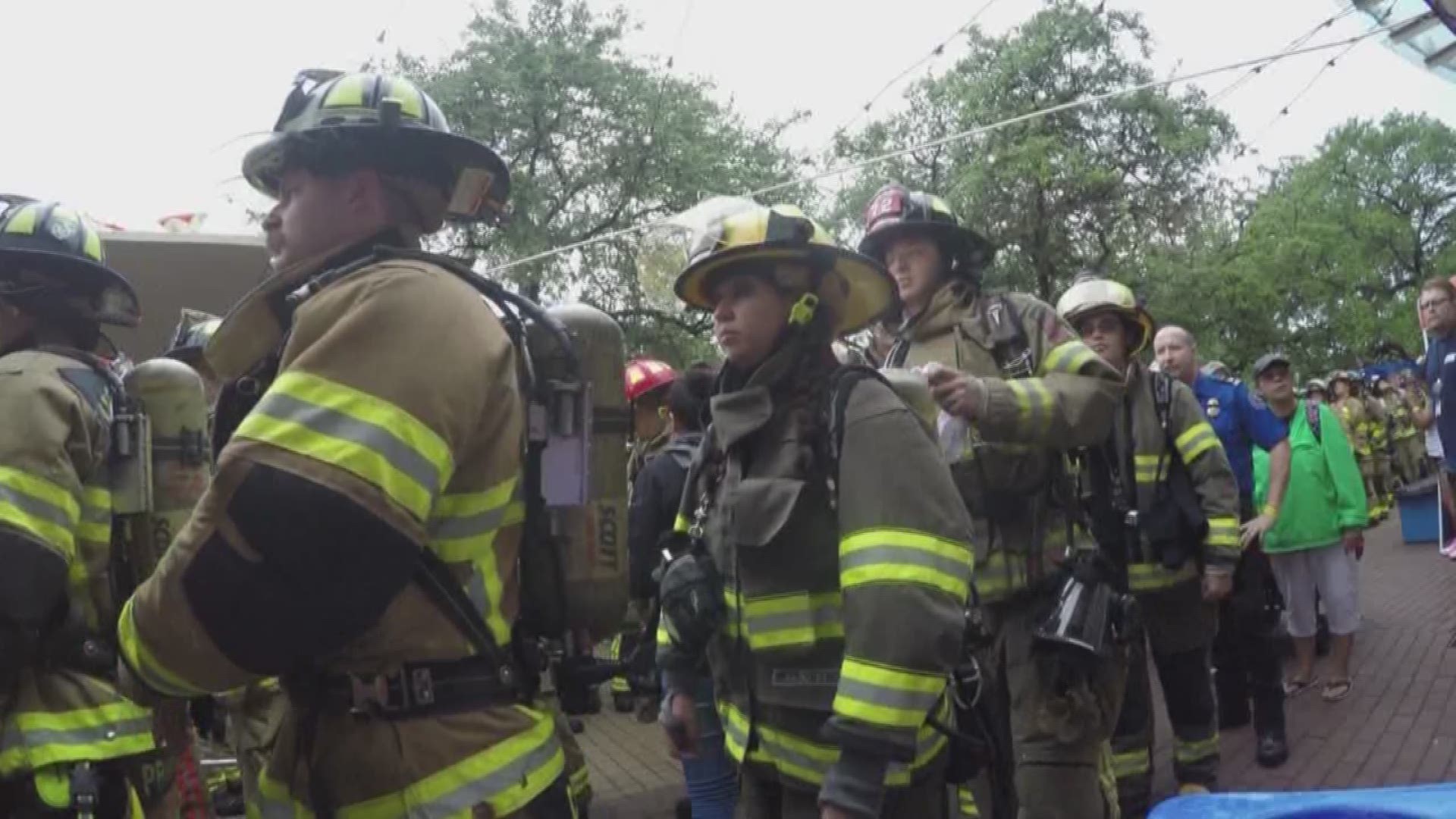 SAN ANTONIO — Americans are stopping on Wednesday to remember Sept. 11th, 2001, when terrorists hijacked jetliners and used them to attack the World Trade Center in New York and the Pentagon in Washington D.C.  More than 3,000 people were killed.

Hundreds of first responders rushed to Ground Zero on that day, laying down their lives to save others. A memorial climb at Tower of the Americas in downtown San Antonio Wednesday paid tribute to their sacrifices.

"There's been an airplane crash into the World Trade Center," crackled an audio recording of emergency dispatch radios from the dark day.

Listening to the chilling transmission, more than 1,000 people stood silently at the base of Tower of the Americas. Their goal was to honor the fallen.

The organization has coordinated the 911 Memorial Tower Climb in San Antonio for seven years.

“911 represents something—it represents that sacrifice that we’re all willing to make every day when we get on that apparatus,” Solinski said. “I think that it’s a good example to show them that and remind them that what happened can happen to any of us.”

To remember the sacrifice made by their New York brothers and sisters, participants in San Antonio climbed 952 steps to the top of the iconic tower.
Then, they climbed all the way back up for a second time. Many made the trek in their full uniform.

The dual-climb included 100 flights of stairs—the height of the World Trade Center.

Gwenny De La Rosa, a local high school student, participated in the opening ceremony by singing the U.S. National Anthem. In the past, she's made the memorial climb while holding her dad’s hand.

Martin De La Rosa is a San Antonio firefighter. He says the steps are one way he can pay tribute.

"I’m here … to commemorate the tremendous sacrifice on that terrible day in 2001 when the firefighters did their best job – their hardest work – to try and rescue as many people as they could," De La Rosa said.

First responders from the area, region and outside of Texas statelines, gathered to carry the names of the fallen to the top of the tower.

"I want this to be as tough as possible because I think that's what it should be,” said Jason Patton, a firefighter from Riviera Beach, Florida. “It should be a tough venture to get up, down and then do it again, so I want to get as close as possible to what those guys had to go through that day."

Several firefighters shook Patton’s hand to thank him for his charity and comedic work. The first responder frequently posts humorous videos offering comic relief from the daily stress firefighters face while on duty. He also serves as vice president for Fire Department Coffee, which donates a portion of its proceeds to injured first responders.

In honor of his participation in the tower climb, $2,500 was donated to the Tommy Cullen Foundation for families of firefighters battling cancer. In turn, Patton added extra weight to his gear as he climbed the tower.

In the sea of climbing firefighters, police officers, EMS and civilians, a four-legged first responder stood out.

“Phreedom climbs. He carries an accountability tag of the only K-9 we lost during the World Trade Center attack. It’s K-9 Sirrus,” said Handler Ronnie Perry, a member of the Berlin Fire Department.

Perry drives from the Brenham area every year to make the climb.

"I climb because of the brothers and sisters that couldn't make it to the top," Perry said. “You dig deep down in your heart because of the guys that passed away.”

At the end of the climb, each participant marched up to a microphone, solemnly read the name of a fallen first responder out loud, rang a bell and placed the name plate on a display. The fallen's legacy lives on. New breath is breathed into the story of their sacrifice each year at the tower climb.