A legacy that lives on: remembering Dr. Hector P. Garcia

In 2009, the Texas Legislature passed 'Dr. Hector P. Garcia Texas State Recognition Day' to be observed on the third Wednesday of each September. 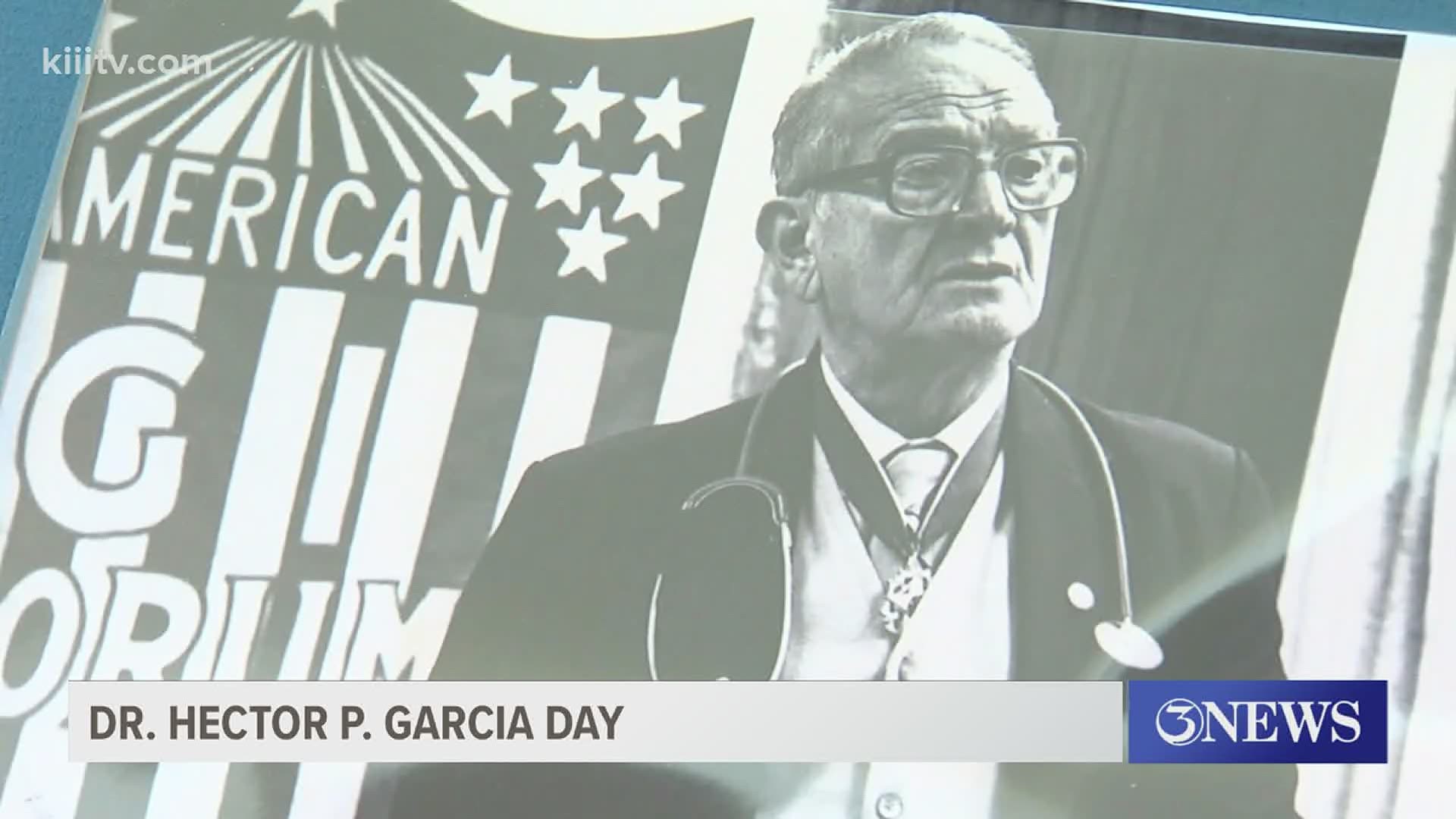 CORPUS CHRISTI, Texas — On this second day of Hispanic Heritage Month 2020, there was a lot to celebrate, among those being Mexican Independence Day (one of Mexico's national holidays, but also celebrated widely in the U.S. by many) and Dr. Hector P. Garcia Texas State Recognition Day.

It was back in May of 2009, Texas Governor Rick Perry signed SB 495 that would establish the State Recognition Day to be observed on the third Wednesday of each September. The day was designated by Senator Juan "Chuy" Hinojosa, who had also passed a resolution naming a portion of State Highway 286 the "Dr. Hector P. Garcia Memorial Highway" in Corpus Christi.

The day commemorates the legacy of the Mexican-American civil rights leader, World War II veteran, and physician who fought for education and voting rights, veterans' rights, access to health care and so much more.

He joined the League of United Latin American Citizens (LULAC) and was elected its president in 1947, and founded the American GI Forum in 1948. In 1984, he was awarded the Presidential Medal of Freedom.

To read his story as told by the foundation named in his honor, click here.

She says that on this day of the year she and her husband are typically travelling across the state to speak at different events in honor of her father. However, because of the pandemic, she says things look a little different, but she is still able to give talks virtually from her home in San Antonio, and update followers on her social media platforms and foundation website.

Her father died in July of 1996 in Corpus Christi, however Garcia Akers says that if he were alive today, even in the pandemic, he would still be urging community members to exercise their right to vote.

"He made sure that we had the ability to go vote – unmolested – at that time. The Civil Rights Act, Voting Rights Act, he was at the forefront for all of that and also for veterans, that's why he started the American GI forum, to make sure veterans coming back from war were taken care of and that they were able to get health care, that they were able to get a job, and an education," Garcia Akers said. “He was so kind to everyone, and in this pandemic, I’m sure he would be out there battling the ignorant statements that are coming out about it: to wear a mask, not wear a mask, and I think we have a responsibility to not only our family, but to the general public, that we comply with the standards so that everybody stays well."

In 2016, she authored the book, "The Inspiring Life of Texan Hector P. Garcia," which tells the story of her father, who as a Mexican immigrant, endured discrimination at every stage of his life, but eventually became a pioneer and a fierce voice in the fight for equality and the rights of so many.

"He was a champion, for everyone not only for Hispanics, but for everyone in the community, and it was through his efforts that the corpus Christi Independent School District became desegregated. People that are going to public schools now, it was through him and his efforts that they’re able to go to school, graduate, go to college, and have a career that is meaningful to them. He did all of that."

In January 2017, the doors opened to the Dr. Hector P. Garcia Memorial Family Health Center, providing care to Coastal Bend area families and residents, regardless of status or income.

To learn more about how you can help the foundation or get involved with its mission, click here.