Alfred Bourgeois' execution is set for December 11. This comes after murdering his two year old daughter in 2002. 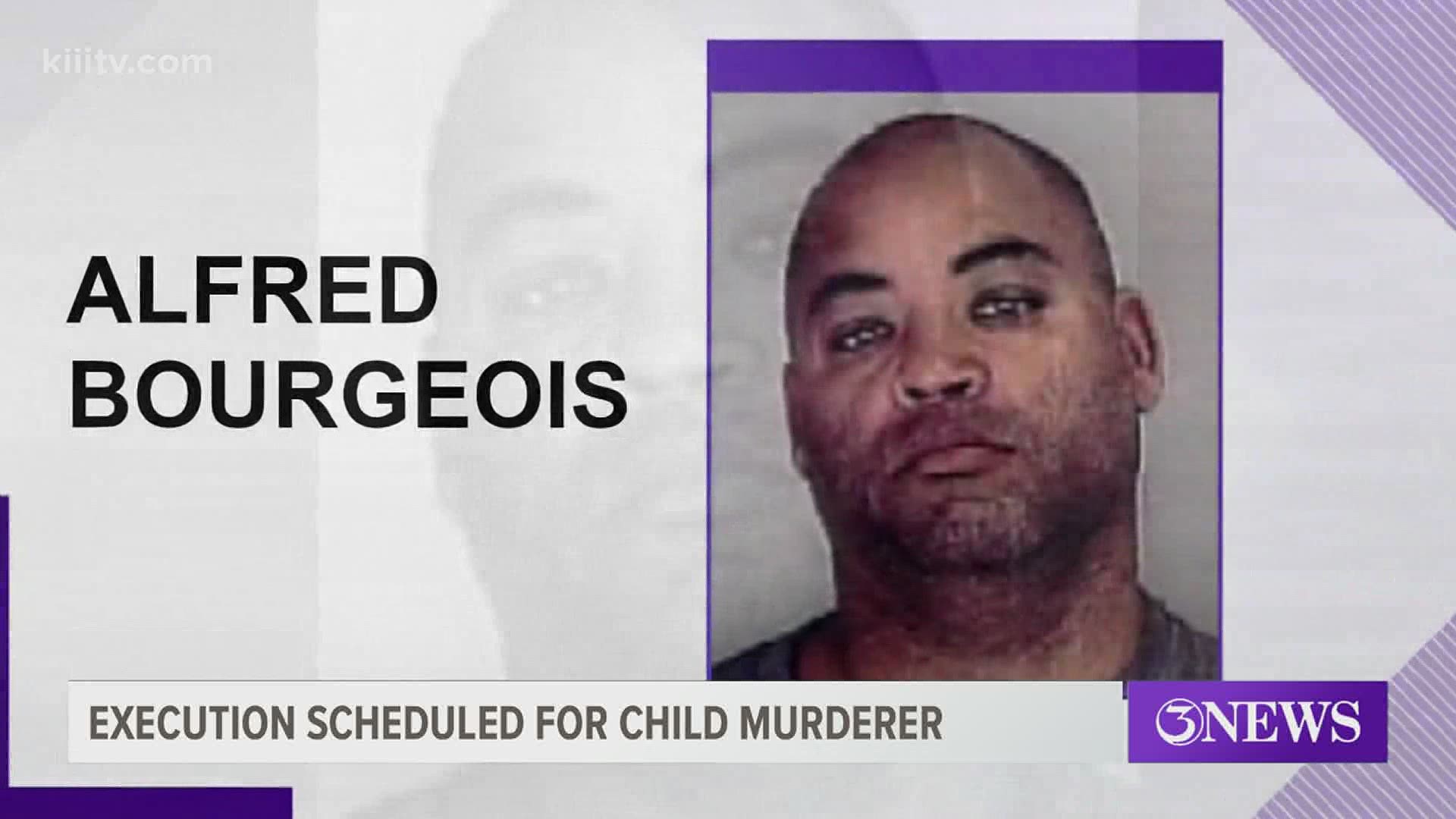 CORPUS CHRISTI, Texas — Alfred Bourgeois was a long-haul trucker from Louisiana, who had recently found out a paternity test identified him as the father of a two-and-a-half-year-old girl. A court ordered that he pay child support to the mother.

“It was a child born out of wedlock," said John Gilmore, one of Bourgeois’ initial attorneys.

Gilmore says Bourgeois asked for and received temporary custody of his daughter and brought her with him on a trucking route. Bourgeois’ wife also went along for the trip.

Court records show Bourgeois systematically abused and tortured her—including by punching her in the face, whipping her with an electrical cord and burning the bottom of her foot with a cigarette lighter.

Bourgeois arrived at the Corpus Christi Naval Air station on June 28, 2002 for a delivery. While backing his truck up to a loading dock, his daughter tipped over her training potty chair in the cab of Bourgeois' 18-wheeler. He became enraged and repeatedly slammed the back of her head into the truck's window and dashboard, killing her.

An 11-hour autopsy determined the cause of death was severe head trauma, but it also found more than 300 injury marks, including whip marks, healed scars, nonspecific and patterned contusions, abrasions, healing ulcerations, lacerations and two bite marks on her body.

Two years later in March of 2004, Bourgeois is tried in federal court because his crime occurred on a naval base. Prosecutors argued Bourgeois had continually and regularly abused the child, physically and sexually, often concealing her injuries with socks and sunglasses.

Bourgeois, maintained he was innocent throughout the trial, refusing to take a plea deal.

RELATED: Man accused of killing boss during argument at construction site in Hockley

"That was his defense, that he didn’t do this and that his wife did it because she was jealous of the child,” said Gilmore.

Gilmore says Bourgeois remained positive during the murder trial but did things that he shouldn't have as a client.

"He was always upbeat about it. I mean, he was. He was really an easy client to work with,” said Gilmore. “He did some things on his own that he shouldn't have done like writing letters and things like that to people that letters were intercepted and it caused him a lot of grief."

Court documents revealed that while in jail, he joked to another inmate that quote: "that *expletive* baby's head got as big as a watermelon," after he beat the child with a plastic baseball bat.

On March 16, the jury took less than two hours to find him guilty and later recommended the death sentence. While an execution date is set, an appeal could be filed.

"I’m sure that they're gonna try to delay it until after the new president takes office and a new attorney general is appointed," said Gilmore.
While not on Bourgeois’ appellate team, Gilmore says there have been discussion of Bourgeois’ mental capacity, which could be a cause for an appeal.

Bourgeois is set to be executed by lethal injection on December 11, at the federal correctional complex, Terre Haute, Indiana.