Briles denies any knowledge of sexual assaults in open letter

Former Baylor University Head Football Coach, Art Briles, broke his silence Thursday with a letter sent to "Baylor Nation," in which he claims he did not cover-up any sexual violence. 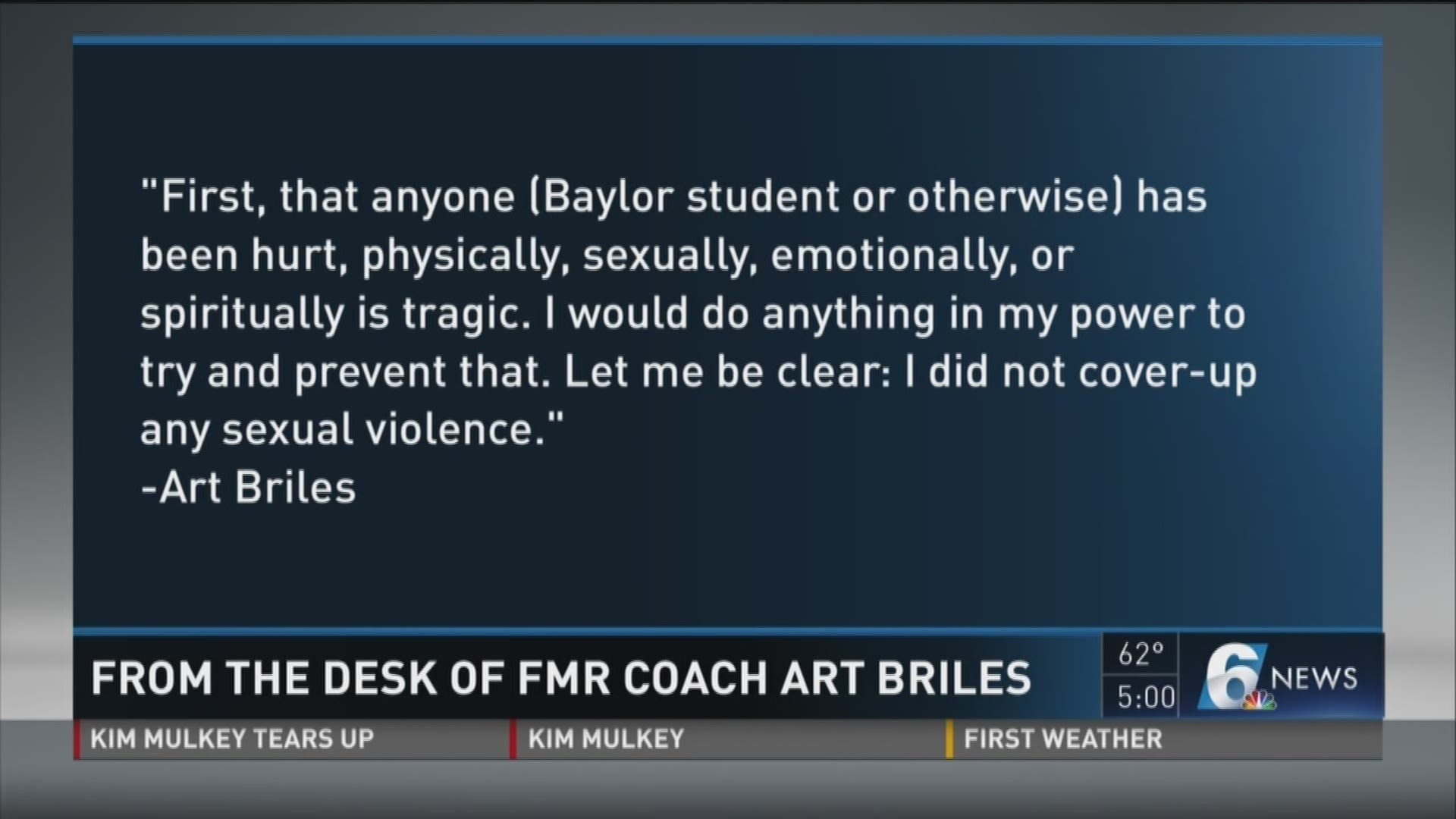 Former Baylor University Head Football Coach, Art Briles, broke his silence Thursday with a letter sent to "Baylor Nation," in which he claims he did not cover-up any sexual violence.

The letter reads, " I had no contact with anyone that claimed to be a victim of sexual or domestic assault."

Briles was fired in May of 2016 in the wake of a sexual assault investigation by the Pepper Hamilton Law Firm, which found the University badly mishandled sexual assaults involving football players.

The letter, sent to Channel 6 by Briles' attorney, Mark Lanier, is one page and addresses multiple allegations that have come to light in the months since he was fired, including that he tried to cover up reported assaults.

"I did not obstruct justice on campus or off," the letter reads. "When I was alerted that there might have been an assault, my response was clear: the alleged victim should go to the police, report it, and it should be prosecuted. And I never knowingly played anyone with a sexual assault allegation."

A court filing on February 2nd included transcripts of text messages exchanged between Briles, his staff and other members of the athletics department.

One exchange sent on April 8, 2011 between Briles and an assistant coach came after a defensive tackle was cited for illegal consumption of alcohol.

Briles sent a message that read: "Hopefully he's under radar enough they won't recognize name - did he get tickets from Baylor police or Waco? ... Just trying to keep him away from our judicial affairs folks...."

In the letter Briles sent Thursday he wrote those texts were taken out of context.

"Rumor, innuendo, and out of context messages, emails, and comments have no place in a true fact-finding mission. The key to growth for the school begins with full transparency, not selective messaging."

Briles wrote in the letter that while he is "bound to certain confidentiality requirements associated with my departure, there are some things I must say."

Lanier told Channel 6 Briles wrote the letter because he wanted to express his appreciation to "Baylor Nation."

Briles dropped a libel lawsuit on February 1st that he had filed alleging his reputation had been damaged by “false and inflammatory statements” made by Baylor officials.

Briles Letter by Channel 6 on Scribd