Over the years, Joe Gazin has been a beacon of light during times of crisis and a voice of truth in troubling times. 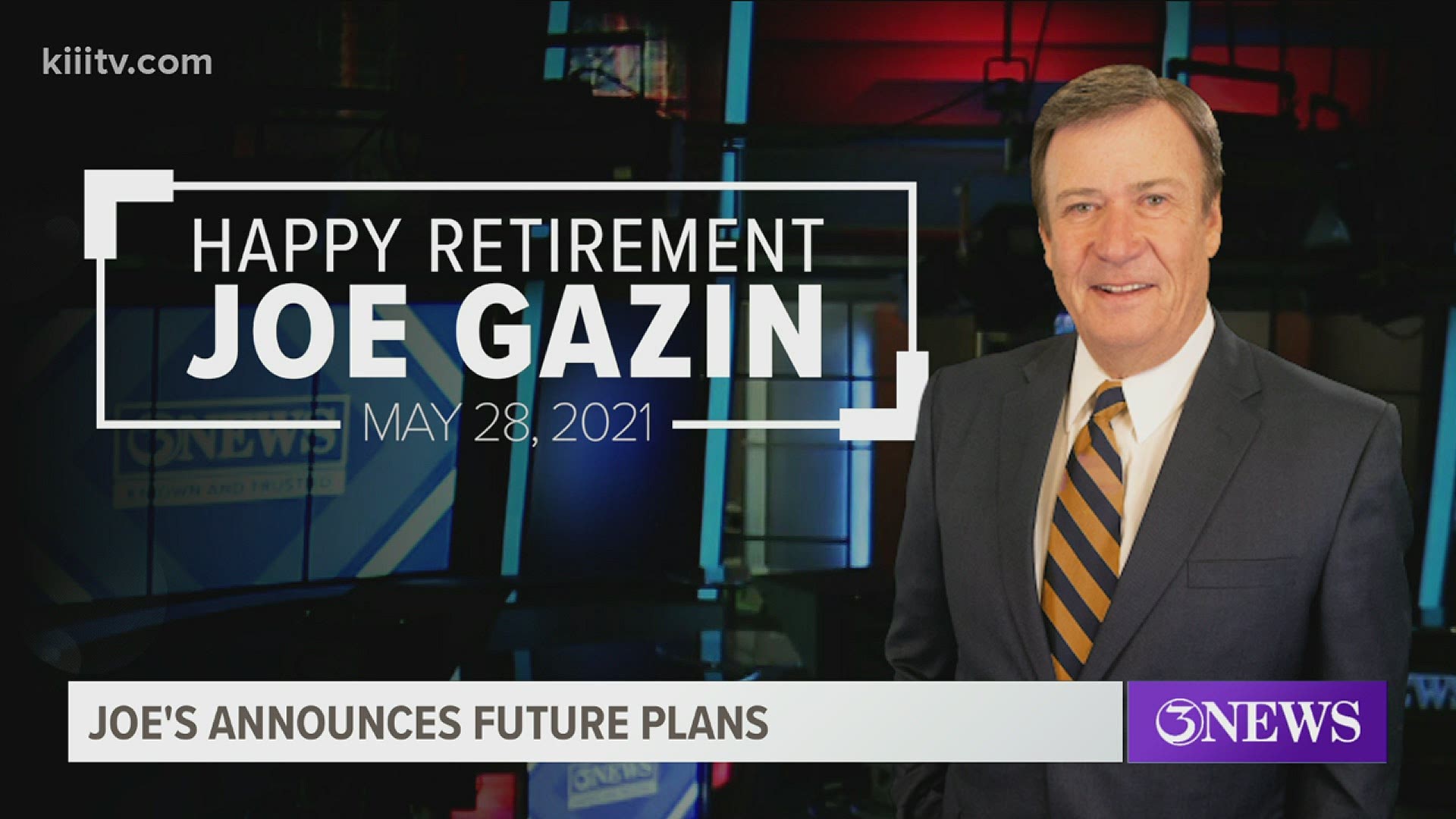 CORPUS CHRISTI, Texas — KIII’s Joe Gazin, after more than 50 years as a leader in broadcasting, has announced today that effective May 28th, 2021, he will be retiring from the Channel 3 newsroom.

Over the years, Joe Gazin has been a beacon of light during times of crisis and a voice of truth in troubling times. Whether covering some of the most dominant stories of the day, such as the major hurricanes starting with Hurricane Allen in 1980, the death of Selena, or even through some of the more recent impacts of COVID-19 and winter storms, Joe Gazin has been the calm voice of reason when we have needed it most.

"Joe's legacy at 3NEWS will be that of consistency...someone that was always known and trusted to bring you the news of the day, or the moment," said fellow anchor and reporter Rudy Treviño. "To have this kind of dedication, to work in one market for 43 years is an amazing feat."

As part of his role in supporting the Coastal Bend, Joe Gazin regularly participates in charitable events benefiting such local non-profits such as Driscoll Children's Hospital, the Coastal Bend Food Bank, Ronald McDonald House, and the Special Olympics.

Harris added, “To that end, through Joe's tireless efforts, KIII has helped raise $14 million dollars for the hospital and Children's Miracle Network. As we move into the annual Miracle Month of May for Driscoll Children's hospital, it's impossible to state how much Joe Gazin and KIII's efforts continue to benefit those in need.”

When asked about his career, Joe shared, "I consider myself extremely fortunate. It's been a wild ride...I've got the highest regard for management, and the people I work with. I've flown with the Blue Angels, interviewed several presidents, and had a front row seat for the major local events of our time."

For as much as Joe has done in the community, he’s done just as much for his family – both at work and at home. Bruce Cummings, vice president, TEGNA media operations and president/general manager of KIII had this to say:

“Spanning more than four decades in the Coastal Bend, Joe has been a driving force of not only critically important local news, but community goodwill and meaningful outreach as well. He has meant so much to me, the KIII 3NEWS family, and to so many more all across South Texas. Joe’s distinguished track record of impact, connecting with people, and of ‘making a difference’ is one that most likely will never be matched. If you are looking for a champion not only in the business of journalism, but also with serving the greater good of our community, you never need look any further than Joe Gazin.”

When asked about why he felt it was time to retire, Joe said, "You can feel when it's right, and it's certainly right at this point." Asked about what he’s doing next, he added, "The sky's the limit...I can do as much as I have the energy to do."

After more than 50 years as a leader in broadcasting, Joe Gazin announced he will be retiring from Channel 3 at the end of May

Starting out from the University of Southern California campus radio and moving on to KABC radio in Los Angeles, Joe Gazin was one of the pioneers in talk radio shows, having his own 4-hour program sandwiched between then mayor Tom Bradley and Regis Philbin. After deciding to enter the world of television in 1975, he briefly worked in stations in Wausau and Madison, Wisconsin before deciding to 'ditch the cold' in 1977 for the warmer climate of Corpus Christi, where he has worked for KIII for 43 years. During his time with KIII, Joe Gazin has won several Associated Press awards (Best Story, Best Newscast) and numerous community accolades for public service and fundraising. He also covered stories internationally, most notably from Cuba, China, Colombia, Panama and Mexico. Joe has been married to his wife Amy for more than 20 years and has four children - three adults who are excelling in their own careers, and one still at home. Joe's plans for the future include him continuing to helm his own production company, where he works with his daughter Melissa.