Kaylene Bowen-Wright appeared in court for a CPS hearing on the case Monday. 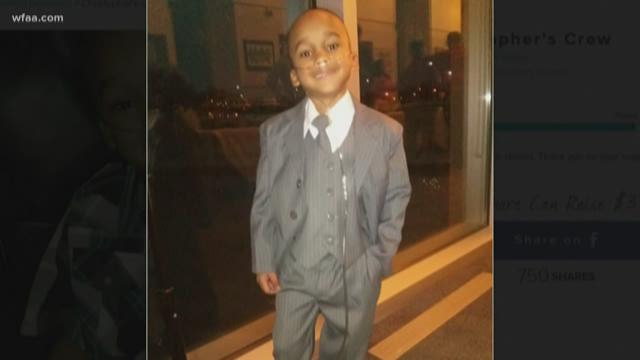 For the first time since Kaylene Bowen-Wright's release on bail, we saw the woman accused of subjecting her eight-year-old son to 13 major surgeries and hundreds of hospital visits he did not need.

Bowen-Wright appeared in court for a Child Protective Services hearing on the case Monday. She did not comment, but one of her attorneys did.

“At the end of the day, you will be able to see that Ms. Bowen was an attentive mother doing what she thought was best for the kids and relied on the opinions of a bunch of others,” said attorney Heath Hyde, who is representing her in the criminal case.

Eight-year-old Christopher and his two siblings were removed from her home in November. Christopher is now in the custody of his father, Ryan Crawford.

Crawford, who spoke before the hearing, said Christopher is doing well and no longer believes he is dying. He said a feeding tube – known as a G-Button – has been removed.

“He's healthy," Crawford said. "He hasn't had any complications."

During the hearing before Associate Judge C. Andrew Ten Eyck, an attorney representing Bowen-Wright in the CPS case complained that Crawford had made disparaging remarks about Bowen-Wright on social media and to the media. The attorney, Lindsey McKay, said there had been “great exaggerations and fabrications” made in the case. She denied her client had tried to get Christopher on a lung transplant list.

She told the judge that a pediatrician who had seen Christopher for six years could attest to his “complex” medical needs. She said the pediatrician had requested full time nursing care for Christopher back in October. She raised concerns about what would happen if he began losing weight.

“If he falls too far behind, it’s difficult for him to catch back up,” McKay told the judge.

She asked that a special medical guardian be appointed, a request the judge denied after hearing from CPS and the guardian who all said it was unneeded. A CPS attorney told the judge said that were enough “eyes on this child to ensure he is being provided appropriate medical care.”

Crawford’s attorney, Shannon Pritchard, said during and after the hearing that she would very much like to question the pediatrician under oath.

As a result of McKay’s complaints about Crawford, it was agreed that he would remove all posts about the case from social media and no longer give interviews to the media while the case is pending.

Attorneys involved in the case told the judge that the other two siblings are doing well. They are now in the custody of their fathers.

Bowen-Wright wiped away tears as the hearing ended. She is barred from having any contact with her children. She has been attending parenting and counseling under orders from the court.

In November, Christopher and his two siblings were removed from their mother’s care after she came to Children’s Medical Center in Dallas. She claimed her son had suffered a massive seizure.

Doctors could find no seizure activity on the EKG. Court records indicate that doctors were concerned that Bowen-Wright may have given him something to induce a seizure so they reported it to CPS.

Police and CPS said Christopher’s mother, Kaylene Bowen-Wright, repeatedly lied to doctors, which led to 13 major surgeries and 323 hospital visits. Investigators said she convinced the boy he was dying and called it a case of Munchausen syndrome by proxy, a mental disorder in which a caregiver makes up an illness or injury to get medical care.

Doctors and CPS investigators involved in the case now say there was nothing wrong with Christopher and he never needed a feeding tube or oxygen or many of the medically invasive procedures he underwent.

“Obviously, this is a unique case but I think that common sense is going to tell you there’s going to be two sides to the story based on the amount of doctors involved and procedures that were done,” said Hyde, Bowen-Wright’s attorney.

Crawford and his family have said they long suspected that Bowen-Wright was lying when she claimed Christopher was near death.

Ryan Crawford said in a prior interview that a family court district judge stripped him of his visitation rights in 2012 because he refused to accept that his son was dying. He hired an attorney in 2014 and tried to get the judge to reconsider. He said the judge refused to even look at the medical records that showed his son wasn't sick.

Bowen-Wright isn't allowed contact with Christopher or his two siblings. She faces a charge of injury to a child. She has not yet been indicted by a grand jury.