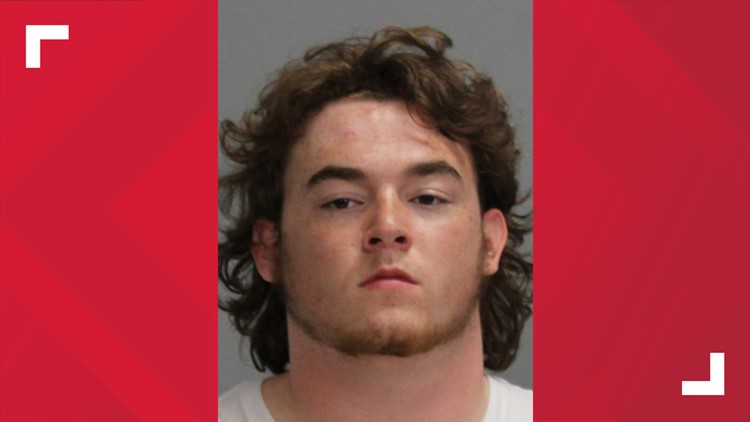 Photo by: BRAZOS COUNTY JAIL
Troy Compton, 17, of Coppell, is charged with DWI, evading and possession of a controlled substance. Police said Compton crashed the truck he was driving in College Station after trying to lose them at speeds of 90 mph in residential areas, and driving the wrong way on the West Feeder Road near Southwest Parkway East.

The College Station Police Department has identified three people who were arrested after a crash on the west feeder road near Southwest Pkwy E.

Troy Compton, 17, of Coppell is charged with DWI, possession of a controlled substance and evading. He was identified as the driver of the truck by its passengers. Garrett Brown, 20, of College Station, is charged with tampering with physical evidence. Police said he admitted to throwing a pack of beer out of the vehicle at one point during the chase. When police asked him why, Brown allegedly said it was so they wouldn't get in trouble for having it.

The third person arrested at the scene has been identified as Reid Johnson, 17, of Colleyville. Johnson is charged with public intoxication. Officers at the scene said Johnson threatened to hurt one of the other passengers in the pickup. Officers said Johnson also was the one who told Compton to not pull over and to drive the wrong way in an effort to outrun the police.

It happened just before 9 p.m. Friday. A College Station police officer said he was in their patrol car when a red pickup nearly smashed into them on Old Wellborn Road.

While officers were still searching for the truck, dispatch reported people had called in about a red pickup driving the wrong way on the west Feeder Rd of Southeast Pkwy E. When the driver, later identified as Compton, attempted to turn left, he crashed the pickup.

Reid Johnson, 17, of Colleyville, is charged with public intoxication. Police said Johnson, who was the owner of the pickup, told the driver to try to outrun the police and to drive the wrong way down the w Feeder Road.
BRAZOS COUNTY JAIL

Officers interviewed the other individuals in the pickup, who said Compton refused to stop, even after they had begged him to. They said Compton had already drank about 10 beers, according to the police report, and he was drinking another beer during the chase. One passenger said Compton told them, "I got this. I'm going to lose them."

Garrett Brown, 20, of College Station, is charged with tampering with evidence. Brown was a passenger in a truck that was involved in an alleged drunk driving crash. Police said Brown admitted to throwing beer out of the truck in an effort to "not get in trouble."
BRAZOS COUNTY JAIL

Officers said when Brown was being booked into jail, a search of his belongings turned up with prescription drugs. Compton allegedly told officers it was Adderall that belonged to passenger Garrett Brown.

Friday night an officer attempted to stop a vehicle at Wellborn and Cain Rd. The car refused to stop, leading to a police chase up to the feeder road of Hwy 6, where it ended in a wreck. There were five people in the vehicle that refused to stop.  This is being treated as an intoxication investigation.

More information will be provided as it becomes available.

RELATED: Things to do this Memorial Day weekend in the Brazos Valley while still social distancing