Newly released video shows Keanon Lowe backing out of a room holding a shotgun in one hand and holding onto the student with the other hand before the two embrace. 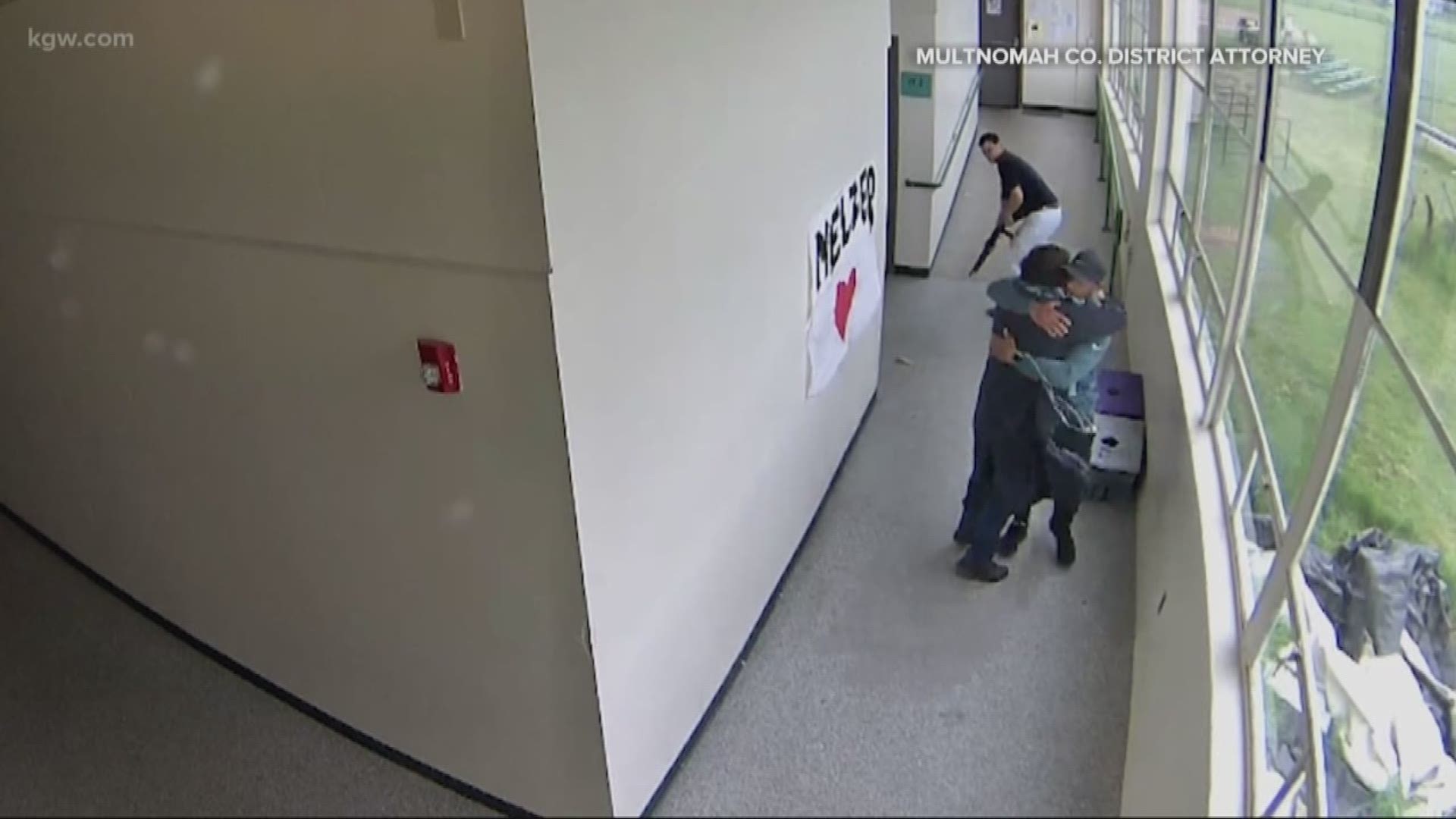 Surveillance video shows Lowe back out of a room holding a shotgun in one hand and holding onto the student with the other hand. Someone runs to grab the gun away from Lowe. That's when then-18-year-old Angel Granados-Diaz and Lowe embrace.

The video shows the officers arrive with guns drawn. Lowe and Granados-Diaz are sitting together on the floor when police move in to arrest Granados-Diaz.

In an interview last spring, Lowe said about the confrontation, "In that time I felt compassion for him. I had a real life conversation. Obviously, he broke down and I wanted him to know I was there for him. I told him I was there to save him, I was there for a reason, and this is a life worth living."

READ: 'I'm happy that I was in that classroom for those kids': Keanon Lowe shares details about encounter with Parkrose gunman

Earlier this month, Granados-Diaz was sentenced to 36 months of probation, as well as immediate mental health and substance abuse treatment.

The Multnomah County District Attorney's Office said that during their investigation “it became clear to law enforcement and our office that Mr. Granados-Diaz did not have the intent to hurt anyone other than himself while at Parkrose High School.”

“The resolution reached will allow Granados-Diaz to get the help he needs to address his suicidal ideations and ensures a level of accountability for taking a loaded gun to school,” Multnomah County Deputy District Attorney Parakram Singh.

On May 17, 2019, Portland police responded to Parkrose High School after it was reported that someone had a gun on campus.

When officers arrived they learned that a school employee, later identified as former University of Oregon football player Keanon Lowe, detained Granados-Diaz and had safely secured the shotgun.

During their investigation, police learned Granados-Diaz had been suicidal for several months prior to the incident. That day, he had made suicidal statements to another student. The student reported those comments to school administration.

Lowe, who is also the school's security guard, was sent to find Granados-Diaz. First, Lowe went to his classroom, but Granados-Diaz was inside a nearby bathroom with the gun.

The district attorney's office said Granados-Diaz left the bathroom, visibly upset and holding the shotgun. He turned the gun on himself and tried unsuccessfully to fire the weapon. When the gun failed to fire, Lowe was able to separate it from Granados-Diaz, officials said.

As part of the plea deal, Granados-Diaz agreed for the gun police seized to be destroyed.

The National Suicide Prevention Lifeline can be reached at 800-273-8255. The Crisis Text Line provides free, 24/7 crisis support by text. Text 741741 to be connected to a trained counselor.

Help is available for community members struggling from a mental health crisis or suicidal thoughts. Suicide is preventable.