An unlikely creature has found itself at the heart of the much disputed border wall between the U.S. and Mexico. 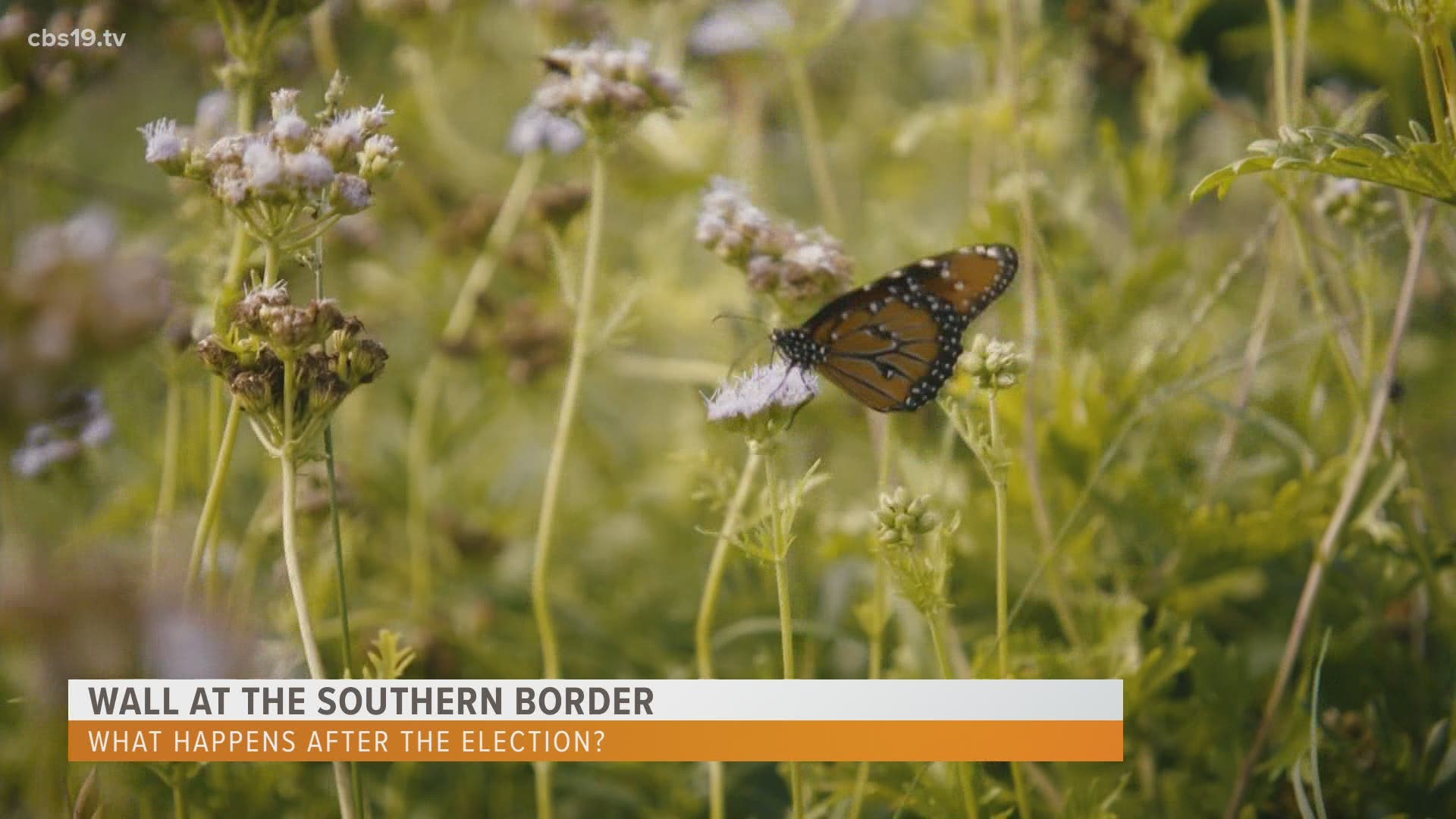 MISSION, Texas — The Texas-Mexico border is split -- literally, by an physical wall that’s in the process of being built, but more generally into people who are against it and who work to support the effort.

It's an effort that may or may not change course with the outcome of the election.

On Oct. 29 in McAllen, Texas, the Department of Homeland Security along with Customs and Border Protection leadership gathered to celebrate the completion of 400 miles of the new border wall system.

“Today, we can confidently say that our border is more secure now than at any time in our history,” said Department of Homeland Security Acting Secretary Chad Wolf. “The wall system is a critical component of the department-wide, multilayered strategy we have implemented to secure our border.”

Not far from the border announcement site is Mission, Texas, the home of the National Butterfly Center -- “ground zero” for the fight against the border wall, as the Center’s Executive Director Marianna Treviño-Wright described it.

“There is no invasion. We live in a beautiful, safe community,” said Treviño-Wright. “And the real threats to peace and safety right now seem to be coming from people within the United States.”

The National Butterfly Center, a 100-acre wildlife sanctuary and botanical garden in the lower Rio Grande Valley, is owned by the nonprofit North American Butterfly Association.

“Butterfly conservation is important because butterflies are the primary pollinators of all of our grasses and flowering plants, shrubs and trees,” Treviño-Wright said. “Butterflies keep everything growing.”

Treviño-Wright said the wall, if built through the center’s property as planned, would cut off 70 percent of its land, destroying critical habitats for butterflies and multiple protected species.

“I describe it as a game of Jenga, where you build a tower of blocks and then one by one you start to remove the blocks until that the tower falls,” she said. “And that is what the border wall will do to the environmental, health and sustainability of our community.”

Since 2017, the North American Butterfly Association has been in court, fighting the government to protect the center’s private property, according to court records and Treviño-Wright.

Recently an appeals court said the Butterfly Center’s case against the federal government should be decided in a trial. Treviño-Wright said the center is currently awaiting scheduling.

So that’s not the end of it in court. The election won’t be the end either.

“What most Americans do not realize is that border wall has had bipartisan support,” Treviño-Wright said. “So, we're not naive enough to believe that if elected, (Joe) Biden would stop all border wall construction. But if he comes to office, it will be in the midst of a horrific public health crisis. That must also be addressed probably before he turns his attention to the humanitarian crisis on the border.”

Just like the rest of the country, the Texas-Mexico border is split between the people who believe there is a crisis that needs a different solution and the administration that say it’s been handled.

“The only reason we haven't reached another crisis is because of the policy and procedures this administration has put into place over the last several years, including the construction of an effective border wall system,” DHS Wolf said during his remarks at the border. “We deeply appreciate the support as we work to secure our borders in our homeland.”