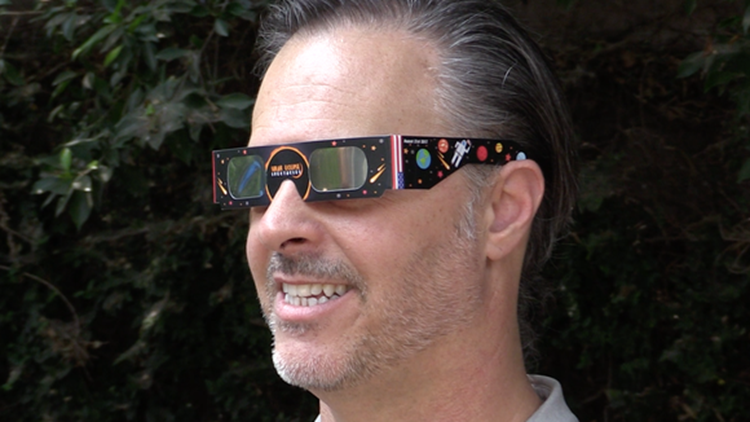 SHERMAN OAKS, Calif. — The biggest photo event of the year is coming in August, and if you want to capture the total solar eclipse, you’ll want to stock up on some accessories and prepare to shoot photos and videos differently.

The big day is Aug. 21, when the moon aligns between the Earth and the sun.

“Total eclipses are fairly rare phenomenon,” says Brian Valente, an astro-photographer whose studio is littered with cameras, lenses and telescopes. Through photography and video, “you can show your family and friends what it was actually like. The last one was 1913, so this truly is a once-in-a-lifetime event.”

•Solar glasses, which look like 3-D shades. “You want to cut down on the amount of light, so you don’t injure your eye,” Valente says. If you look at the sun during an eclipse without protection, you could go blind.

•A solar filter for your camera lens. Whether you shoot on a big DSLR or a small smartphone, you can order the filter sheet and use a pair of scissors to slice out a covering that can be taped over your camera lens. Focusing the lens on the eclipsed sun without a filter could damage the camera.

•A tripod. The eclipse will go from day to night fast, and you’ll need the best tool to keep the image steady. A decent tripod can be picked up for as low as $25, but it's not very steady. Expect to spend at least $100 on one that won’t shake as much.

•Smartphone tripod adapter. If you plan on shooting the eclipse on your iPhone or Galaxy, you’ll need an inexpensive smartphone adapter to fit the phone onto the tripod. Expect to pay less than $10 for this.

•A zoom lens or smartphone lens accessory, like the Olloclip or Moment lens. To get a great shot of the eclipsed sun, you’ll want to zoom in; otherwise, you’ll just have a shot of a big sky with a little dot in it.

If you have a DSLR, you’ll need a long lens. Ideally, try a 200mm or 300mm lens, which is the focal length sports photographers use to capture big events. Wildlife photographers go even further, using big 400mm to 500mm lenses, which cost thousands of dollars. One cool cheaper accessory is a lens extender, which you can attach to the bottom of your zoom lens. Expect to spend $200 to $300 for them.

What about the smartphone?

The lenses on smartphones are primarily wide-angle (28mm for iPhone, 26mm for Samsung Galaxy S8) and can’t be switched out for others.

A cottage industry has emerged of accessory lenses. There are tons of telephoto add-on lenses you can clip to the front of the phone.

The two most common brand names are Olloclip and Moments, and both have lenses selling in the $100 range that will extend your range to around 85mm, which is perfect for a portrait. It won’t get you that much closer to the sun, but it will look way better than just the standard smartphone image.

Using the DSLR, get a good shutter speed to stop action, and use the timer to snap photos without the camera shake of your hand on the shutter.

If you opt for the smartphone, which I expect most of you will, reach for the timer (five seconds should be good), and snap the shutter that way to eliminate camera shake.

•Video. On a smartphone, you won’t be able to compete with the pros and camera nerds who have access to the giant lenses and even know how to connect their DSLRs to telescopes.

But video mode on smartphones are great. You can shoot in high resolution 4K on the more recent models, and wouldn’t it be absolutely awesome to watch the sky go from day to night in a matter of minutes?

(If you have a DSLR, you can do the same thing. Just remember that in both cases, you have to have your camera atop a tripod.)

Video “is a great way to see the landscape around you, as it goes from daytime to night to daytime again,” Valente says,

•Time-lapse. You’ve probably seen the gimmick all over YouTube. The clouds start speeding across the skies in super fast speed, as in the opening sequence of Netflix’s House of Cards. This is called time-lapse, and most smartphones have the feature. Put the phone on your tripod, set the time-lapse button maybe five minutes before the expected eclipse, and let it roll for 20 minutes. You’ll end up with a condensed, absolutely awesome look at a magic day you’ll be able to share online.

You’ll want to take the clip into a video editing program to trim the boring parts before the eclipse starts. Apple’s iMovie is free, and so is GoPro’s terrific new Quik app for smartphones.

•Shoot the crowd. The eclipse is going to be quite the scene, the Woodstock of nerds, and you get to be a part of it. With your smartphone, capture the crowd, the day, the funny hats and glasses. Think the old Life magazine photo of folks watching a 3-D movie at the theater, and you get the idea. This is your Alfred Eisenstaedt moment.

To recap: All you need are glasses, a filter for the camera, a tripod, a smartphone adapter and a place to camp out on the magic day.