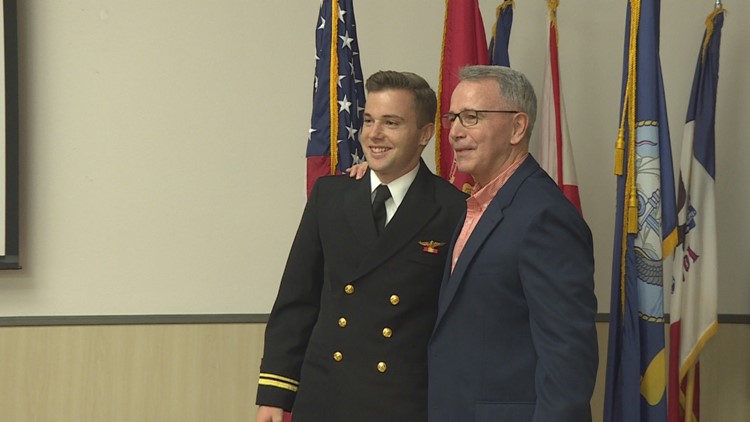 CORPUS CHRISTI, Texas — Within the last year the Navy has purchased military aircraft from the Marine Corp called the Osprey. Now the Navy needs people to fly them.

That's why it was a big deal on Friday afternoon for NAS-CC to pin wings on their first-ever naval pilot ready to take on the job.

Just for reference an Osprey looks like a huge helicopter with two large propellers. It's also referred to as the CMV-22.

Dewon Chaney is one of people responsible for making sure naval pilots know how to fly them.

“We are brand new out the gate that's why this is a big deal to have the first flight school student out here in Corpus get winged to come into our community,” Chaney.

The student he's referring to is Caleb Nicholson.

While Nicholson may be the first in this regard his family is definitely no stranger to the military.

“My father was a Marine for 22 years,” Nicholson said. “My two brothers serve in the Coast Guard. My grandfather was also in the Navy for four years during the Korean War.”

And just as much as the military played a large role in Nicholson’s life, his dad said planes have too.

“Caleb got his private pilot’s license when he was 17,” David Nicholson.

Caleb said being able to fly a helicopter is what attracted him to the Osprey.

“Also just being on the forefront of a new community,” he said. “Going out to San Diego getting to roll that out. Excitement all around.”

Making his country and family proud.

“We think it's a great aircraft and we are proud,” his dad said. “Caleb is going to be a part of that community.”