Video shows JaQuavion Slaton shot multiple times by police officers. He also had a self-inflicted gunshot wound, according to the Tarrant County ME. 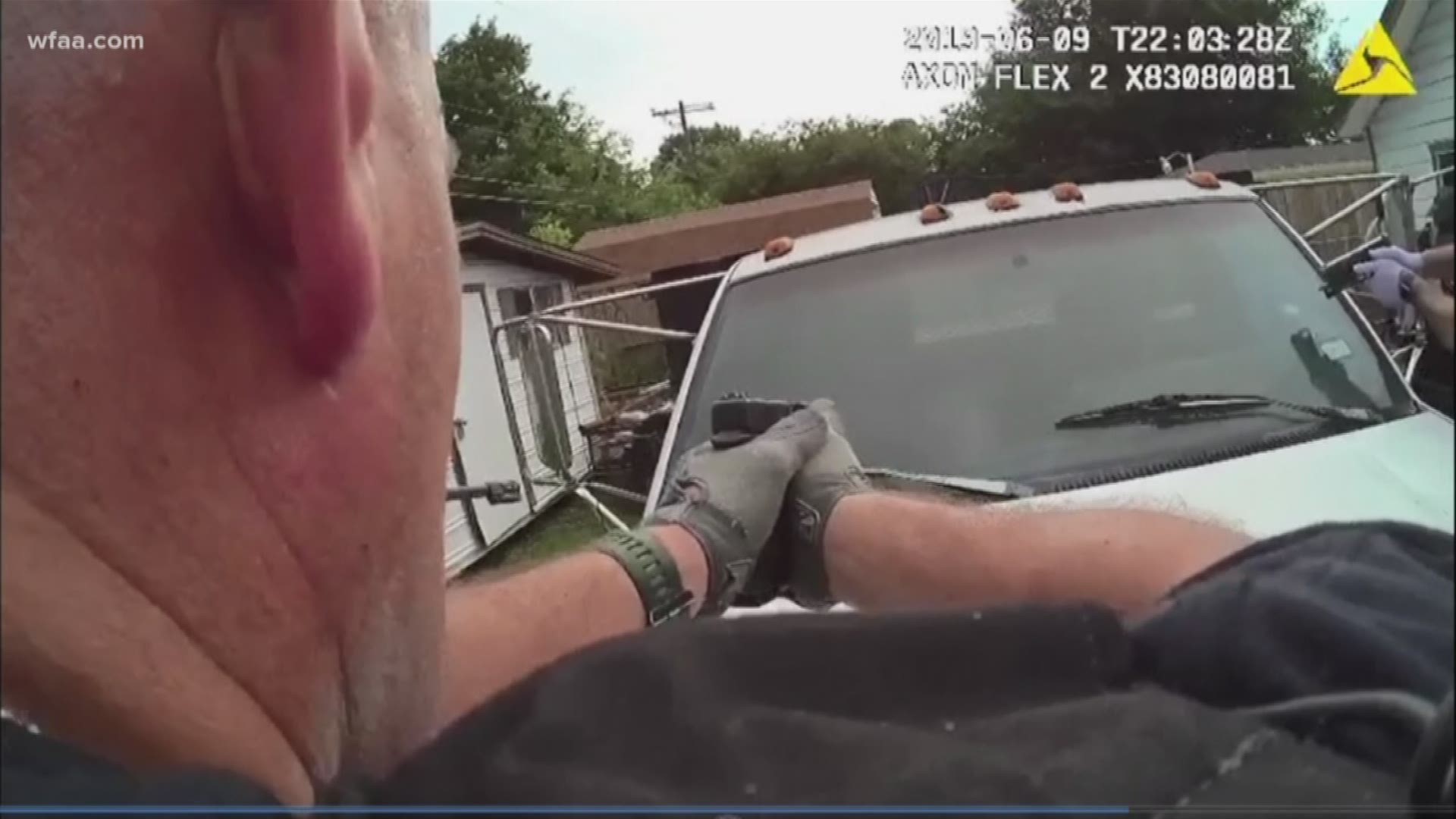 Updated at 6:15 p.m. with additional comments from Fort Worth community.

Fort Worth police released Thursday an edited version of body camera footage showing the fatal shooting of a 20-year-old man.

Community activists demanded the Fort Worth Police Department release the footage at a City Council meeting Tuesday. They said they believed officers didn't use de-escalation techniques before opening fire on JaQuavion Slaton.

Slaton was shot multiple times by police officers and had a self-inflicted gunshot wound, according to the Tarrant County Medical Examiner.

But Fort Worth interim police Chief Ed Kraus said Thursday that officers were "in fear for their lives" when they shot Slaton, who was believed to be armed and dangerous.

Video shows officers surrounding a truck where Slaton was hiding after he and his cousin fled from police during a traffic stop. An officer broke in one of the windows of the truck moments before the shooting.

Kraus said officers saw Slaton moving inside the truck and believed he was reaching for a gun.

"De-escalation techniques do not work in every situation," Kraus said of the fatal encounter.

Credit: Family Photo
Jaquavion Slaton was wanted for aggravated assault with a deadly weapon when Fort Worth police shot and killed him.

"Today’s clips were for illustration purposes for the release. The combined videos are hours long," Fort Worth police said in a written statement.

The second clip in the video shows officers handcuffing a man and asking the man where Slaton was. That encounter appears to take place feet away from the truck where Slaton was hiding.

The video then skips ahead to show officers surrounding the truck. That clip shows an officer break the window

"Put your hands up," the officers shout.

The footage shows movement inside the truck.

The clip switches to the view from a different bodycam, as evidenced by the timecode of the video and the bodycam identification number.

"He's reaching," one officer yells before the officers fire several times at the truck.

Monroe told WFAA he believes his cousin was trying to put his hands up when officers shot him.

Police said a loaded gun was found inside the truck, police said.

“Our officers were not on a mission to take anyone’s life that day," Kraus said.

The Tarrant County Medical Examiner determined Slaton died from multiple gunshot wounds to the head and chest. His death was ruled a homicide.

The man also had gunshot wounds to the right side of his head, right neck, base of his head and upper right arm from 9mm rounds, the medical examiner determined.

Slaton also had a "loose contact entry gunshot wound of the right temporal head" that was self-inflicted, the medical examiner said.

The medical examiner said it is still working to determine if the gunshot wound was intentional or accidental.

Credit: Fort Worth Police Department
Fort Worth police released an edited compilation of body camera footage of the shooting of 20-year-old JaQuavion Slaton. Police also released a photo of the loaded gun found on Slaton after the fatal shooting.

RELATED: Fort Worth police were involved in four shootings — two fatal — in the first eight days of June

Muhammad lives two houses down from where the shooting occurred. He said he doesn't understand why police were so quick to approach the truck.

“If the man's backed up in a corner, all they had to do was step back and wait him out,” Muhammad said.

He said he was concerned officers didn't consider the bystanders.

“They had their guns out,” Muhammad said. “There were people out, there were children out—my children, my grandchildren. None of that was taken into consideration.”

Kraus said the officers positioned themselves in front of the truck to avoid shooting in the direction of any bystanders.

Fort Worth city councilwoman Gyna Bivens said she wants to create a policy requiring police to release bodycam videos. She was among those calling for the video to be released.

Kraus said officers believed Slaton was armed and dangerous before the fatal shooting. Police had searched for Slaton three times before they were called Sunday. The shooting occurred around 4 p.m. at East Berry Street and Lauretta Drive.

Officers first tried to find him May 6 after police were alerted Slaton was likely in a Fort Worth neighborhood.

University of Texas at Tyler officials had contacted Fort Worth police, because Slaton was a suspect in an aggravated assault reported April 28 at a campus apartment.

Officers were again called May 22 because there was a domestic disturbance involving Slaton. Police were called again on June 5 but were told Slaton hid from them, Kraus said.

Kraus said officers were called again Sunday because Slaton was "yelling at a family member who was too afraid to call police and that he had a knife."

The police chief played bodycam footage during the Thursday news conference. The footage slows down the foot chase and then zooms in on Slaton's hand, which appears to be holding something.

It appears the footage released is from at least two body cameras. 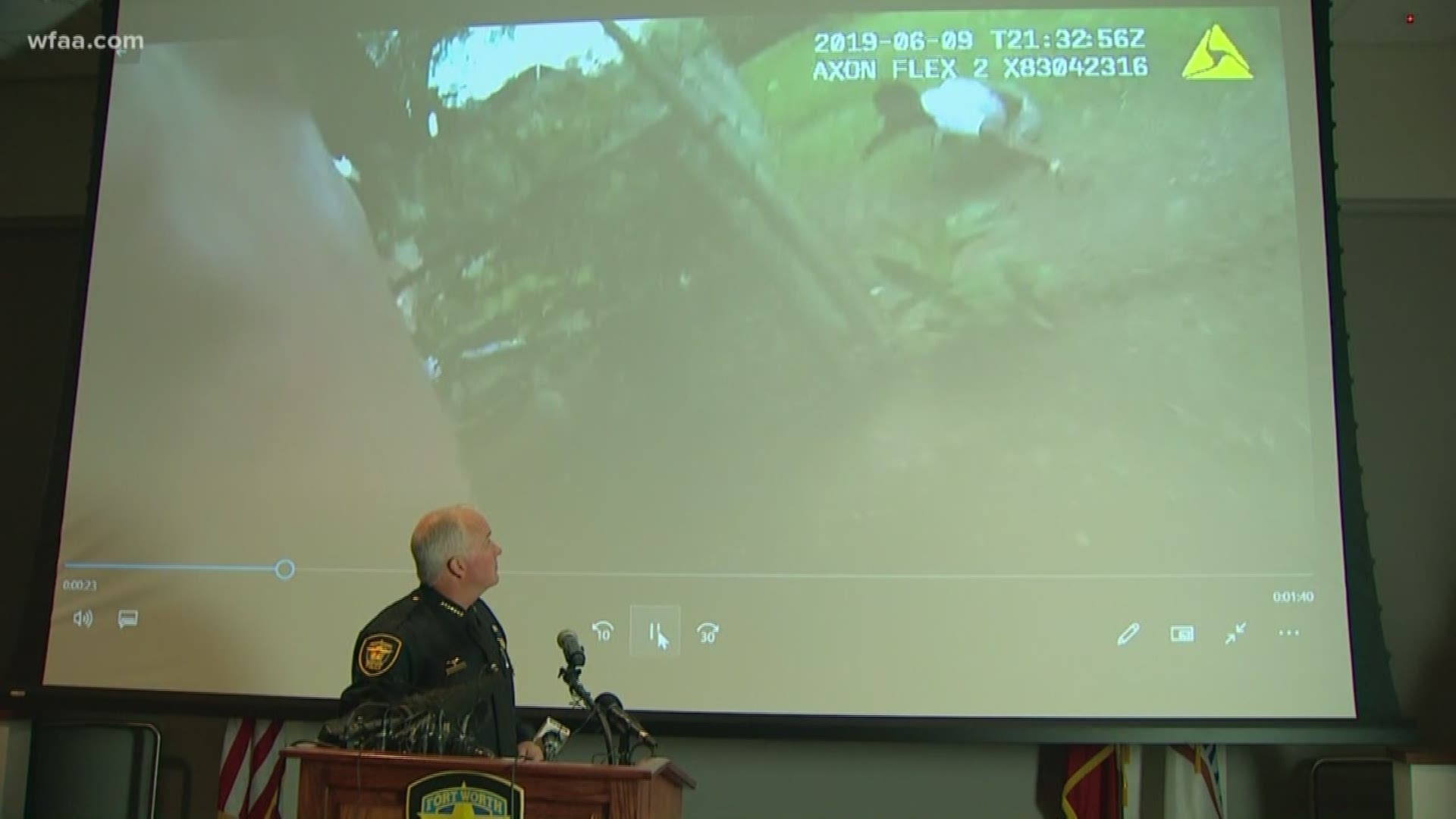 Fort Worth Mayor Betsy Price released a statement after the Thursday news conference saying she continues to "support our outstanding Fort Worth police officers."

"Let’s be clear, on Sunday night they were serving a warrant on an individual wanted for aggravated assault with a deadly weapon," Price said.

She pointed out that Slaton was not from Fort Worth.

Price said the Police Department was "very measured" in the updates it gave the public.

"I know there is fear and anger among some in our community. But calling for justice and calling our police officers murderers is absolutely appalling and irresponsible," Price said in the written statement.

She said the community must come together to offer solutions to "prevent our young people from turning to a life of crime."

Though Slaton was not from Fort Worth, the mayor said, "I know there are young men just like him right now across our city that lack opportunity and limited by their own circumstances."

The events that unfolded on Sunday are tragic – no matter where you fall on this issue. A 20-year-old man is dead, much too young with his entire life in front of him. We continue to support our outstanding Fort Worth Police Officers, that go above and beyond every single day to keep this community safe, doing their jobs to keep criminals off the street. Let’s be clear, on Sunday night they were serving a warrant on an individual wanted for aggravated assault with a deadly weapon.

I know there is fear and anger among some in our community. But calling for justice and calling our police officers murderers is absolutely appalling and irresponsible. We recognize that releasing these videos and images will not relieve tensions in our community. Our police department has been very measured in updating the public and media in this case. It is irresponsible and negligent to release information without ensuring its accuracy.

There is much work to do. But no healing or solutions will happen without our entire community coming together – what are we doing to offer as a solution to prevent our young people from turning to a life of crime. This man was not from Fort Worth, he wasn’t one of our own, but I know there are young men just like him right now across our city that lack opportunity and limited by their own circumstances. We can do better. But we can’t offer solutions without the willingness among the leadership in our community to step up and be a part of creating opportunity, restoring trust and looking for a solution.

My door is open, it has been and remains to be. I am in this community and will do the work to ease tension and fear, but I cannot do it alone. Every elected leader, every faith leader, every community organizer is needed to make a difference and make the change that is needed.

Lastly, I would like to clarify that I was traveling on behalf of DFW Airport for official city business on Sunday and was in constant communication with FWPD and city leadership. I appreciate FWPD Command Staff providing me updates and information around the clock. – Mayor Betsy Price, City of Fort Worth