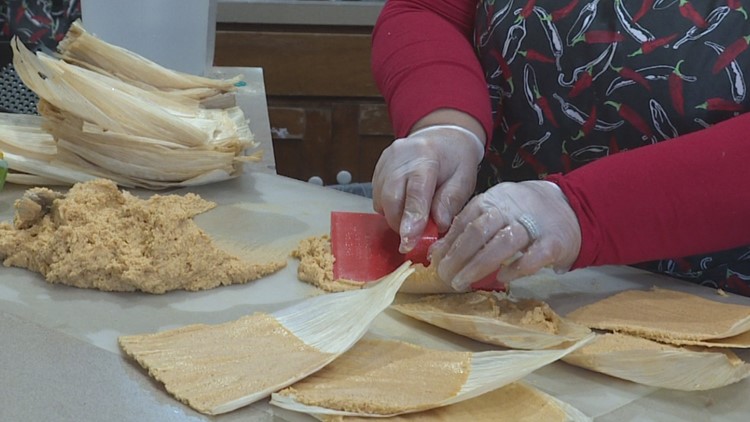 CORPUS CHRISTI, Texas — Christmas is right around the corner and for many coastal bend families that means getting ready to whip up big batches of tamales.

Usually it's an all-day process, but on Saturday people at Heritage Park took part in a cooking demonstration that resulted in delicious tamales made in a fraction of the time.

For Sandra Vasquez, as a child Christmas time was perfect for making tamales.

She said with more people over that meant more hands on deck..

"Back then we used to use our hands," Vasquez said.  "It use to take four hours just to put air into the masa. So what is it about that great tamale? It's about the dough."

And many people share that same experience, so you can guess how surprised they were when they saw Vasquez's tamale making demo and it took no time at all.

"Done in a few hours and lots of tamales," attendee, Trinidad Jimenez.

Vasquez said it's all about embracing modern technology in the kitchen.

So using a mixer to knead the masa, a spice grinder to blend the seasonings, a food processor to chop up the meat and a pressure cooker to steam the tamales.

And the biggest time saver is the masa spreader as oppose to using the back of a spoon.

To top it all off Vasquez shared other tasty recipes to prepare alongside the tamales.

Not only did we learn how to make tamales, but they also taught us how to make Mexican rice, capirotada, and some wonderful salsa.