The Pentagon released in-cockpit video from the Navy Blue Angels and Air Force Thunderbirds as they flew a tribute to COVID-19 front-line workers. 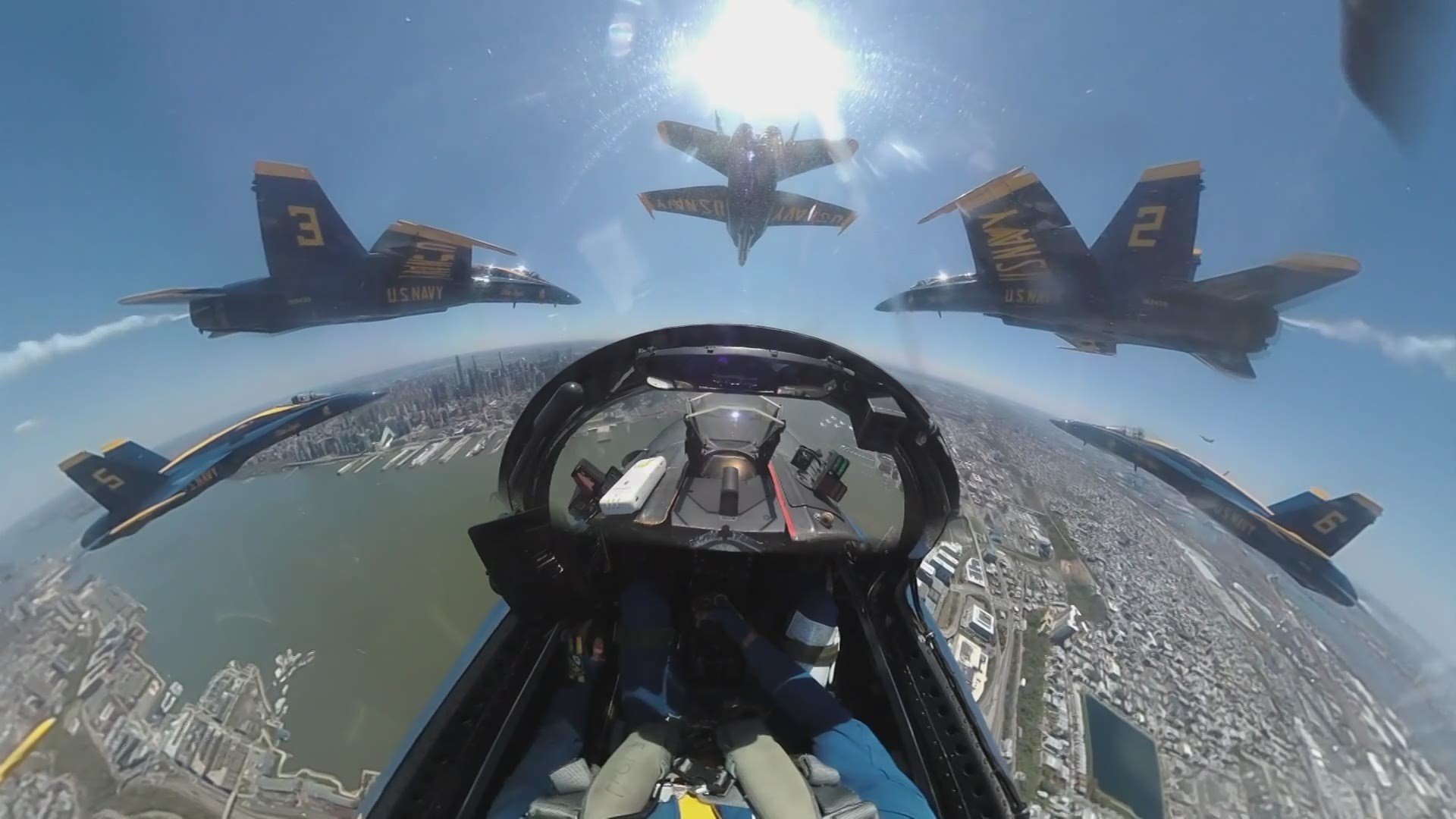 NEW YORK CITY, N.Y. — The Department of Defense has released in-cockpit video from the U.S. Navy Blue Angels and U.S. Air Force Thunderbirds precision flight teams as they flew over New York City Tuesday. They were conducting a tribute to the medical personnel, first responders and other essential workers involved in fighting the pandemic.

The planes from the two demonstration squadrons flew in formation over New York and Newark beginning at noon. The planes later flew over Trenton, New Jersey, and Philadelphia.

“We are incredibly honored to have the opportunity to salute those working on the frontline of the COVID-19 response, we are in awe of your strength and resilience,” said Navy Cmdr. Brian Kesselring, U.S. Navy Blue Angels commanding officer and flight leader.

The flyovers fulfill training requirements for the pilots, who must fly a minimum number of hours to maintain proficiency, according to military officials, who said the squadrons have had to cancel many performances since the virus outbreak. The flyovers do not involve additional costs to taxpayers, officials said. 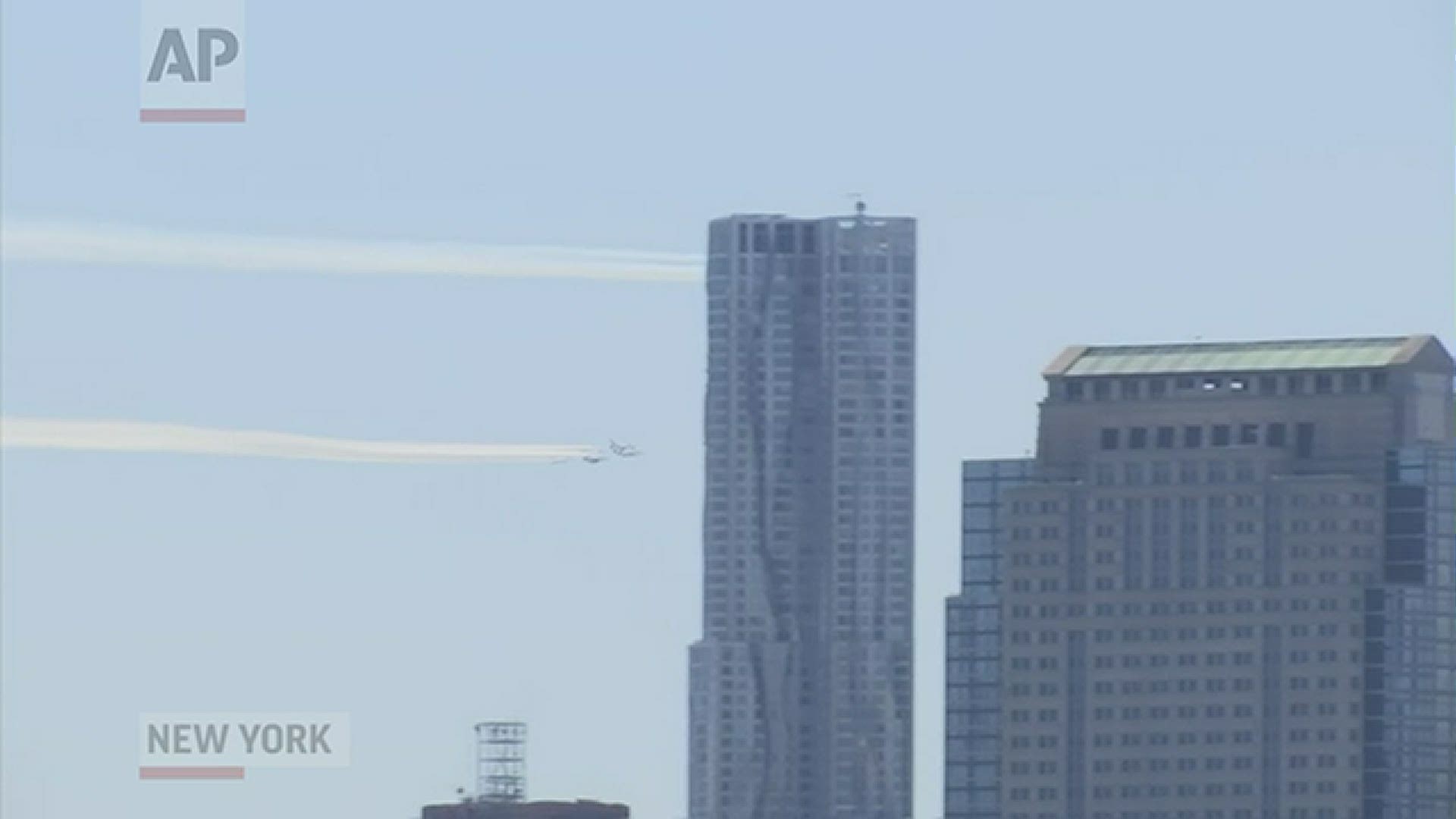 New COVID-19 hospitalizations in New York state are averaging under 1,000 a day for the first time this month, the latest sign of slowly decreasing pressure on the health care system.

Gov. Andrew Cuomo told reporters Tuesday that hospitalizations and deaths from the outbreak were both continuing to tick down. The daily death toll dropped again, with 335 deaths reported Monday — the lowest daily tally recorded in April and the third straight day under 400.

There have been 17,638 deaths in New York since the outbreak began, according to state figures. The state total doesn’t include more than 5,200 New York City deaths that were attributed to the virus on death certificates but weren’t confirmed by a lab test.

At the peak of the outbreak earlier this month, there had been more than 3,000 new COVID-19 hospitalizations a day, based on a three-day rolling average. The comparable figure released Tuesday was 953.

“It’s still a significant number of people,” Cuomo said. “But overall you see the numbers coming down, so that’s good news.”

The total number of patients hospitalized dropped to 12,646.

With caseloads dropping, the Navy hospital ship USNS Comfort, sent to relieve stress on city hospitals at the height the pandemic, was set to depart Thursday.

Operations also appeared to be winding down at the temporary federal medical facility at the Javits Center. There were 69 patients inside the cavernous Manhattan convention center Tuesday, according to the Cuomo administration. The Pentagon said patients were in the process of being transferred to local hospitals with an expected “completion of mission” around Friday. A Cuomo aide said Javits will be able to be used as a medical center, if needed.