A 10-year-old document was dug up because some thought it showed COVID-19 was pre-planned. The scenario described has several differences from reality. 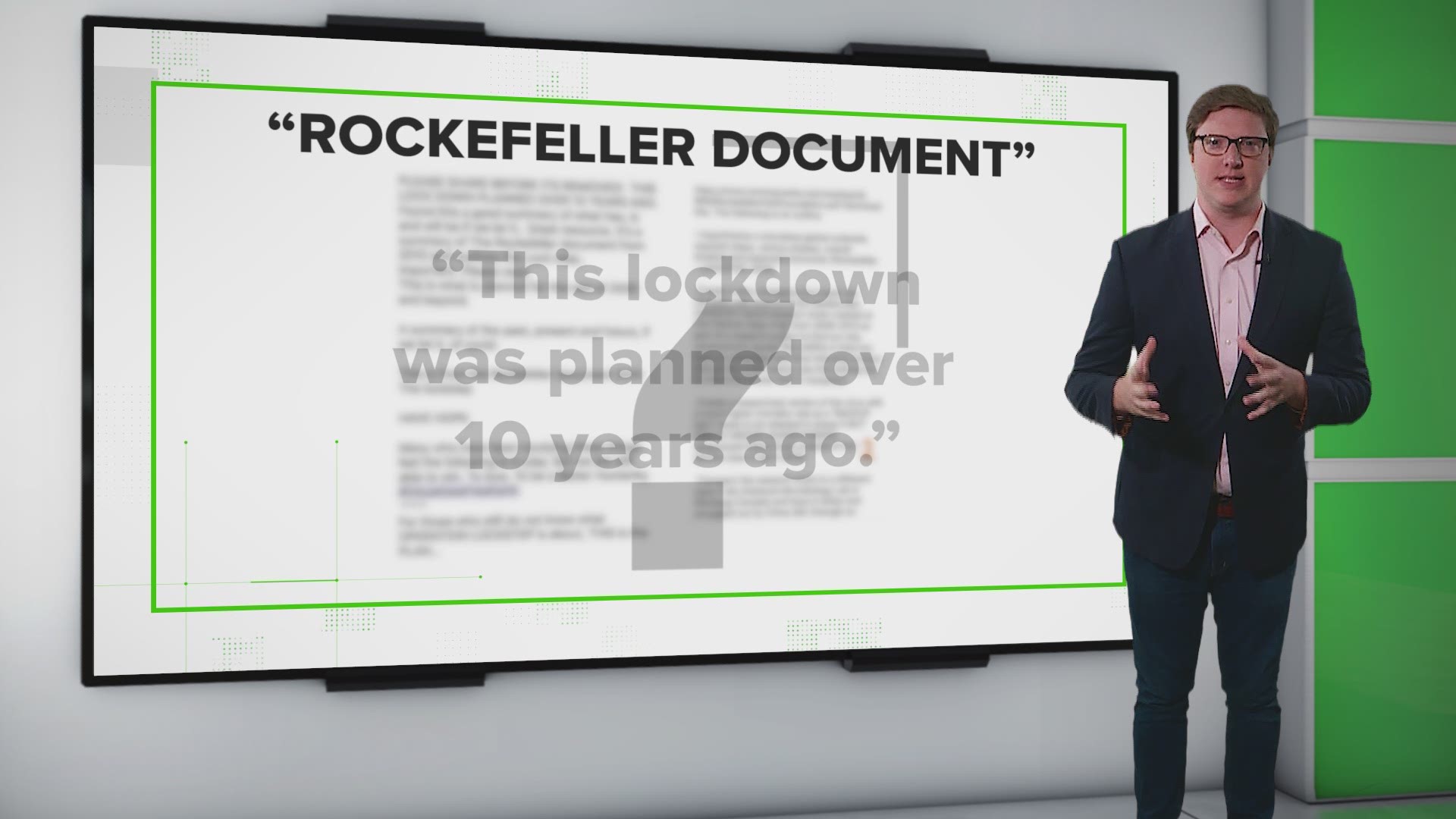 Viewers asked the VERIFY team to look into social media posts claiming that the “Rockefeller document” from 2010 is evidence that the COVID-19 pandemic was pre-planned.

The post said that the document outlined what has already happened in the first several months of the pandemic.

But is that actually the case?

Is this “Rockefeller document” evidence that the COVID-19 pandemic was pre-planned?

No. The document referenced outlined a number of scenarios that could be addressed in a number of different ways. One of those scenarios included a global pandemic taken advantage of by authoritarian governments. The details of the scenario were different than the current COVID-19 pandemic.

The actual name of the document is ‘Scenarios for the Future of Technology and International Development’. It was produced by The Rockefeller Foundation and the Global Business Network in May 2010 to consider the roles of philanthropy and technology in future scenarios.

There are four hypothetical scenarios within the report, but only one of them was a pandemic. The scenario is called "Lock Step," which outlines a situation where a global pandemic is taken advantage of by authoritarian governments.

That scenario does describe events that play out similarly to what we’ve seen in the real world. “The United States’s initial policy of ‘strongly discouraging’ citizens from flying proved deadly in its leniency, accelerating the spread of the virus not just within the U.S. but across borders. However, a few countries did fare better— China in particular. The Chinese government’s quick imposition and enforcement of mandatory quarantine for all citizens, as well as its instant and near-hermetic sealing off of all borders, saved millions of lives, stopping the spread of the virus far earlier than in other countries and enabling a swifter post-pandemic recovery.”

But there are few other similarities.

The virus described in the scenario is a 2012 flu strain originating from wild geese. It spread much faster than the real virus, infecting nearly 20% of the global population -- that’s about 1.5 billion people -- and killing eight million in just seven months.

We are currently about seven months into this pandemic and according to Johns Hopkins more than 13 million people have been infected and nearly 600,000 have died.

The scenario also states the hardest hit areas are Central America, Southeast Asia and Africa due to the absence of official containment protocols. While Johns Hopkins’ data does show COVID-19 cases are surging in Latin America, the pandemic has spread through Southeast Asia less than in most of the world and most African countries report case numbers lower than much of Europe. The country with the most cases in the world right now is the United States.

Another factor this claim disregards is that this scenario plays out over a period of years. While the flu first starts spreading in 2012, the scenario’s timeline shows that the hit to intercontinental trade caused by strict pathogen controls doesn’t happen until 2015.

Ultimately, the document showcases what could possibly happen as a result of a pandemic. However, it’s not some kind of plan, or even necessarily a prediction, for the current pandemic.