Texas distilleries, wineries say they should be exempted from coronavirus closures

Distillery and winery owners say their businesses are different from traditional bars, which Gov. Greg Abbott closed in June after COVID-19 cases began to spike. 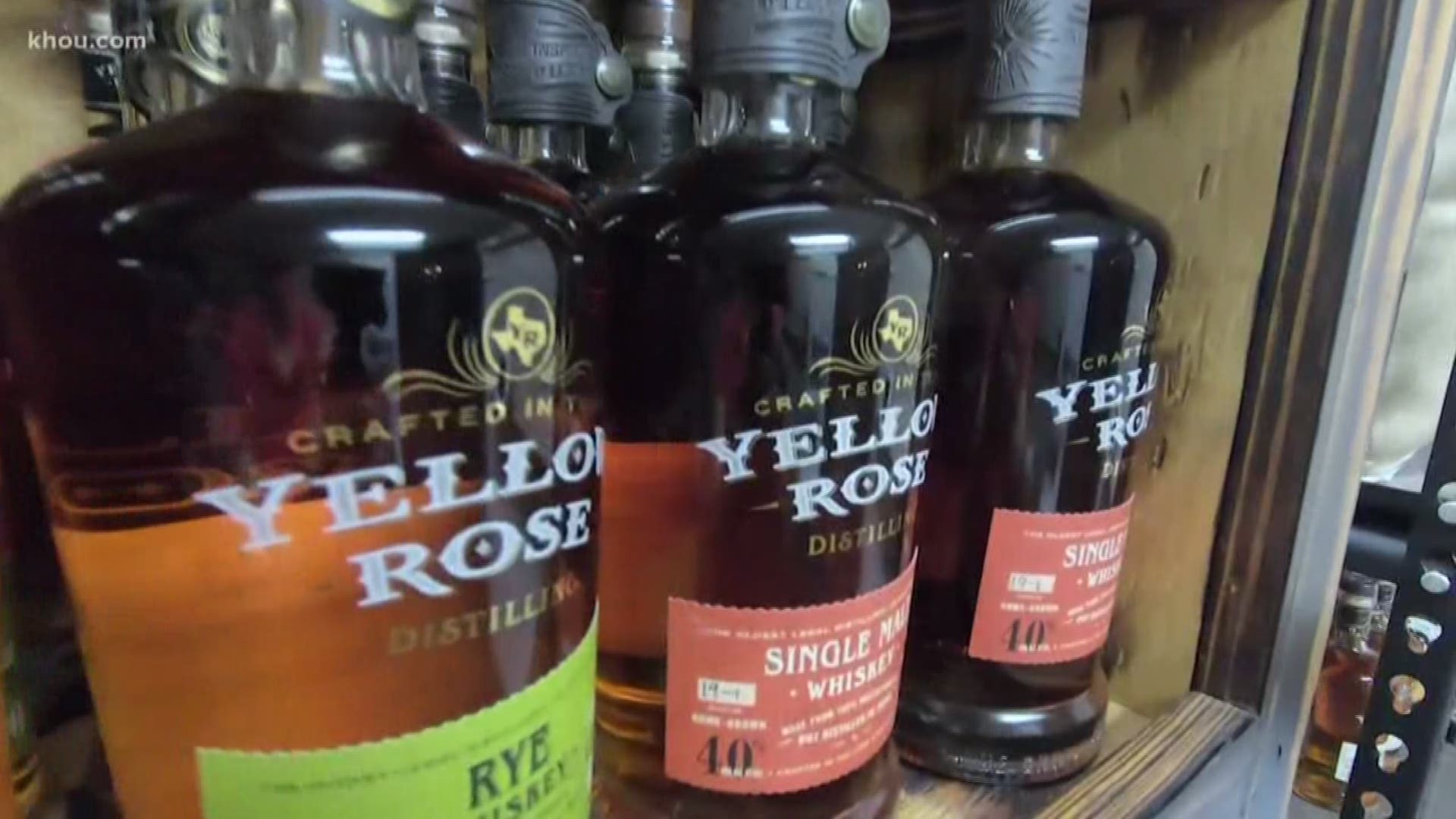 AUSTIN, Texas — Editor's note: The above video on the Yellow Rose Distillery in Houston originally aired in June of 2019.

The owners and patrons of Ironroot Republic Distillery in Denison hardly consider the business to be a bar in the traditional sense.

There’s no loud music or dancing. The doors closed at 5:30 p.m. most nights before the pandemic. On Saturdays, they closed at 3 p.m. Most of its business came from out-of-towners booking tours who wanted to sip the “World’s Best Bourbon,” as designated by the World Whiskies Awards.

Nonetheless, Ironroot Republic Distillery was shut down late last month with the rest of the bars in the state under Gov. Greg Abbott’s latest executive order.

Meanwhile, other businesses like restaurants, theme parks and bowling alleys are still open with limited occupancy. Abbott’s order required any business that gets 51% or more of its revenue from alcohol sales to close.

“We're tourism industry businesses, we're not bars. So they shouldn't treat us like bars,” said Dan Garrison, owner of another tasting room, Garrison Brothers Distillery in Hye, a community in the Texas Hill Country.

Distillery, winery and even some restaurant owners with high alcohol sales say they are unfairly being caught in the crossfire of the statewide bar shutdown, despite running starkly different operations from those Abbott warned against when he issued his latest executive order.

“We're all struggling to survive right now,” Garrison said. “And we're about to lose a heck of a growing industry if the governor doesn't do something.”

As COVID-19 cases and hospitalizations climbed in June, Abbott closed bars for a second time. He later expressed remorse in an interview for opening bars so soon, saying that the "bar setting, in reality, just doesn't work with a pandemic," noting that people "go to bars to get close and to drink and to socialize, and that's the kind of thing that stokes the spread of the coronavirus."

But Garrison told the Texas Tribune that tasting rooms at distilleries aren’t like bars.

When Ironroot Republic Distillery shut down, most of the people who booked tours could no longer purchase bottles unless they were local to the area, owner Robert Likarish said. Delivering or mailing liquor to consumers isn’t allowed unless there’s a restaurant attached and the business has a mixed beverage permit.

Because it’s in a rural area, it’s been a challenge to get traffic to the distillery for curbside pickup. And even if people do come, state law only allows distilleries to sell two bottles of liquor to a customer within 30 days.

RELATED: Houston bars fight back after being listed on mayor's 'Wall of Shame'

“Essentially, all the things that we'd normally do to help sell and push movement of our product are gone,” Likarish said.

“It was just kind of generally a wide-swath brush applied to everybody in the alcohol manufacturing industry if they had any kind of retail onsite consumption,” Whelan said.

Whelan is calling for the two-bottle limit to be waived and Sunday sales be allowed. But more than anything, he is urging Abbott to allow age-verified delivery — so that distillers can sell their products across the state.

“What's going to make an impact is the ability for us to ship to somebody in Dallas when you're in the Hill Country and make sure that there's an age-verified way for it to be delivered,” he said, noting that Tennessee and Kentucky have already passed similar rules.

He said his organization ran a letter-writing campaign that generated 14,000 letters asking Abbott for expanded options. He said he hasn’t yet heard back.

“We need the governor to understand that this is a different business model, and places like Kentucky have figured this out,” he said. “Texas is still refusing to even acknowledge that it's a topic that needs to be addressed.”

Wineries, which often have spacious outdoor vineyards and patios where patrons can spread out, say they’re also being unfairly targeted.

“We were highly impacted by the shutdown and the pandemic just because we were forced to basically close our tasting room, which is where 90% of our sales are generated,” Lost Draw Cellars owner Andrew Sides said.

After missing out on sales in April and May— the months that typically perform best — the Fredericksburg winery reopened at the beginning of June with new rules: All tastings were moved outside, and only one group of people who came together was allowed at a time.

But then, along with bars, the winery was forced to close.

Sides said he wished that Abbott’s order had been more specific — his permit is different from bars' permits, and people are largely taking the wine offsite to consume at home. It’s frustrating for him when other similar businesses — like a local salsa maker who allows onsite testing — can stay open.

“The whole intent for most tasting rooms and wineries is for people to come and try wine, buy it and leave,” he said.

Sides said he will stave off of layoffs as long as he can, but he’s not sure how long that could be.

Bending Branch Winery in Comfort, near Fredericksburg, has been closed since March but was gearing up to open right before the shutdown order, general manager Jennifer McInnis Fadel said. The staff purchased hand sanitizer, devised social distancing strategies and underwent new safety training. The winery's first appointment was set for three hours after Abbott announced his order and had to be canceled.

Wineries have the ability to direct ship to customers, so in response to being closed, Bending Branch has changed its operating model to accommodate delivery and pickup orders.

Fadel said wineries typically have a lot of outdoor space to utilize and doesn’t think it’s very different than how restaurants operate. But closing wineries could also have a negative impact on agriculture in the state, she said.

The bar shutdown has also closed many restaurants that have high alcohol sales, industry experts said.

The Texas Restaurant Association estimated that at least 1,500 restaurants that serve alcohol have been forced to close, putting 35,000 employees out of work under Abbott’s executive order.

The Friendly Spot Ice House — an outdoor burgers and beer venue popular among families in San Antonio — had only reopened for two weeks when Abbott ordered bars to close in late June. Because its revenue generated from alcohol sales outpaces food sales, the ice house was also forced to close down.

Jody Newman, the owner of the San Antonio staple, waited for five days, hoping that something would change, before letting her staff go.

“I'm a person of reason, and I'm a person that believes in the system,” she said through tears. “But firing my staff was gut wrenching.”

“Restaurants are not like a light switch. I mean, you have to bring your staff back, and you have to buy inventory,” she said. “One of the worst things that's happening right now is how our staff is being treated and just almost completely disregarded.”

Editor's note: This story comes from our partners at the Texas Tribune. Read more here.

Disclosure: The Texas Restaurant Association has been a financial supporter of The Texas Tribune, a nonprofit, nonpartisan news organization that is funded in part by donations from members, foundations and corporate sponsors. Financial supporters play no role in the Tribune's journalism. Find a complete list of them here.