VERIFY: Data from CDC site does not prove thousands died from COVID-19 vaccines

Anyone can report potential vaccine side effects to the VAERS database, but doctors warn those reports are not verified evidence. 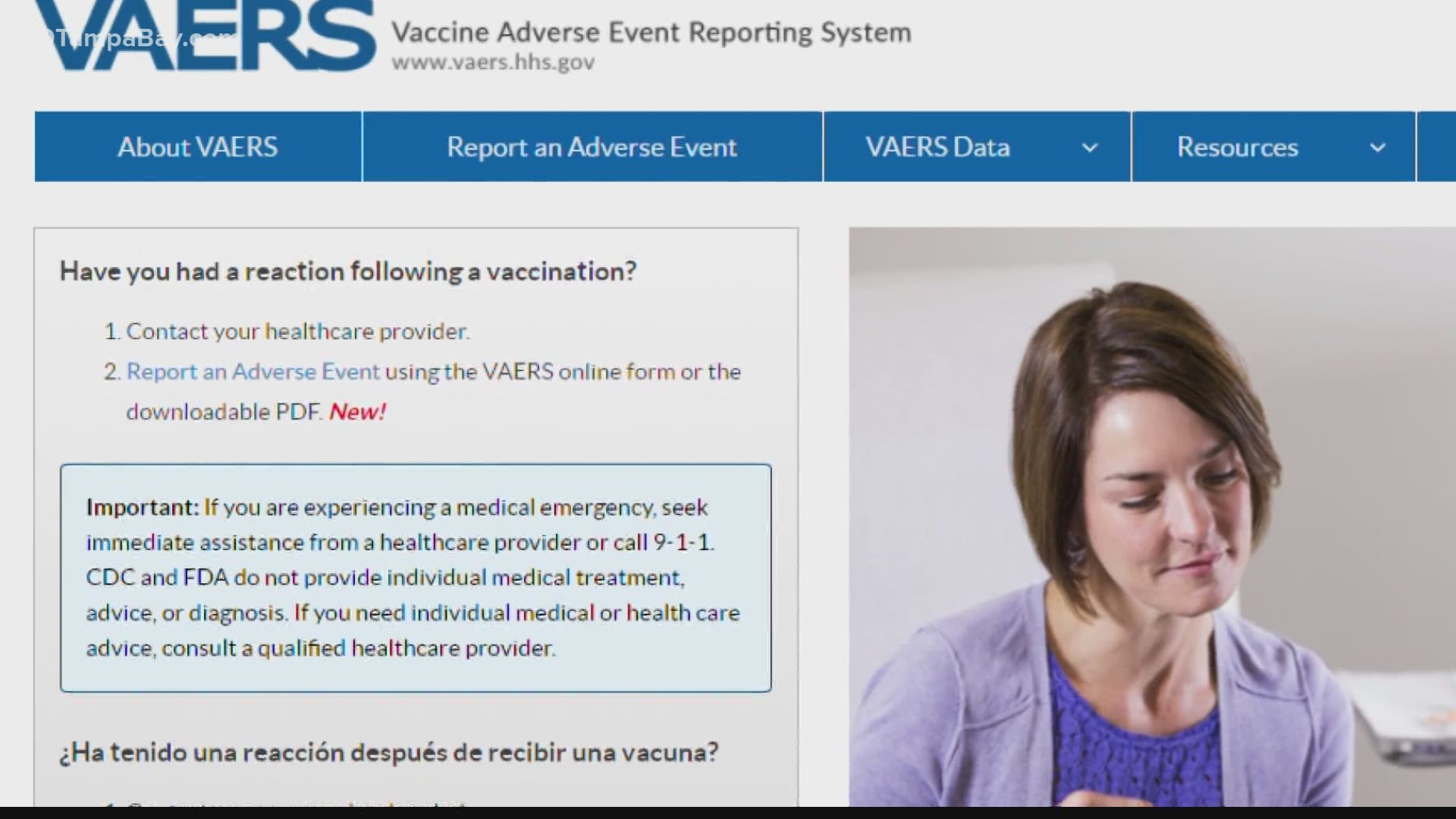 ST. PETERSBURG, Fla. — Various posts circulating on social media are citing data from the Vaccine Adverse Event Reporting System, or VAERS, claiming it’s proof that thousands of people are dying from the COVID-19 vaccines or having other serious side effects like miscarriages.

Not included in these posts are the numerous disclaimers on that same site that say reports alone submitted to the database cannot be used to determine if a vaccine contributed to an adverse event because reports can be incomplete, inaccurate, coincidental or unverifiable.

Dr. Arnold Monto, a professor in epidemiology and public health at the University of Michigan and acting chair of the FDA's Vaccines and Related Biological Products Advisory Committee, explains how the site is intended to be used.

He refers to it as “cries of alarm” because what’s reported isn’t necessarily causal.

"The VAERS system is set up to be open-ended—in other words, you can report anything that occurs after vaccination,” Monto said.

But that’s only the first step.

RELATED: FDA could authorize Pfizer vaccine for ages 12 to 15 by next week

“Then you have to figure out whether it’s really related to the vaccination or not,” Monto said. “You need the second step—doing the analysis.”

The VAERS system has been utilized by the Centers for Disease Control and Prevention and the Food and Drug Administration since 1990 as a sort of early warning system, allowing researchers to monitor reports of side effects to detect potential unusual or rare patterns that might require further investigation or intervention.

Since mid-December, more than 230 million doses of COVID-19 vaccines have been administered, according to the CDC. As of April 26, VAERS received 3,848 reports of death (0.0017 percent) among people who received the COVID-19 vaccine.

RELATED: Think you had a weird reaction to the COVID vaccine? You should report it.

“CDC and FDA physicians review each case report of death as soon as notified and CDC requests medical records to further assess reports,” says the CDC. “A review of available clinical information including death certificates, autopsy, and medical records revealed no evidence that vaccination contributed to patient deaths.”

Further, the CDC said the system “has not detected patterns in cause of death that would indicate a safety problem with COVID-19 vaccines.”

"That's actually a perfect example of how the numbers are being used to make causal connections to the vaccine that are completely, completely wrong,” said Dr. Raquel Hernandez, referring some of the misleading posts circulating on social media.

Hernandez, the director of health and equity research at Johns Hopkins All Children’s Hospital, says in her ongoing research on vaccine hesitancy that misinformation online is the number one contributing factor.

"Sadly, VAERS was put out there to be transparent in reporting side effects, which legitimately should be looked into,” she said. “New data will be reported on the safety of these vaccines throughout and we have to be prepared to vet that information and to communicate that effectively.”

Monto says the potential for the information to be misused by the public is the price to be paid for transparency.