The Austin Transportation Department urges riders to remember to thoroughly inspect scooters before riding them. 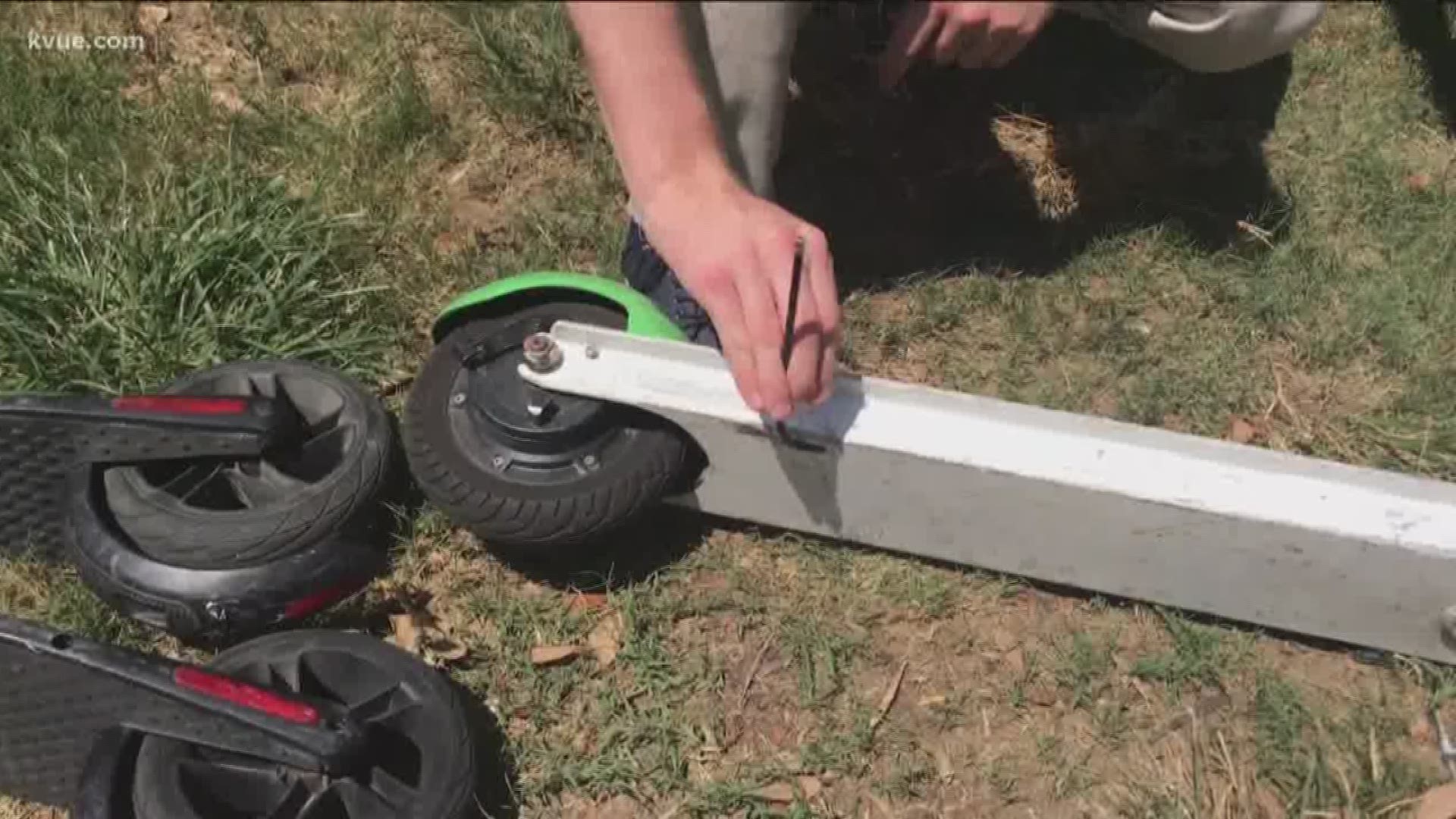 AUSTIN, Texas — Love ‘em or hate ‘em, dockless electric scooters are easy to find when you’re looking for a ride around Austin. But the KVUE Defenders found scooters being sabotaged on Rainey Street in Downtown Austin are putting riders’ safety at risk.

We found a pile of the sabotaged scooters right outside the Milago luxury condominium complex at 54 Rainey Street.

Austinite Johne Greene uses scooters to get to work every day. He was about to use one of the damaged ones before we pointed out the busted brake lines.

“That’s a safety issue,” Greene said. “I’m glad you told me because I could have just hopped on this and particularly injured myself right now. So, I appreciate that.”

Cashing in on the scooter craze: One local homeless man charges scooters to make money

It’s an issue we discovered when we received viewer video showing a man clearing scooters from in front of the Milago complex and throwing them on a pile of other scooters. We went to check it out on Monday and found some scooters with brake lines completely detached and others with brake lines severed apart. There were also parts from scooters on the ground.

We came back Wednesday morning and saw the same man from the viewer video at it again. We watched him bend down, use a tool on the scooter, put the tool back, then pick the scooter up and walk it over to a pile next to the property.

To check to see if the brakes worked, we gave them a test ride. Some were difficult to slow down and others wouldn’t stop at all.

We talked to the man as he was moving one of the scooters to the pile.

“We noticed that some of the brake lines on some of the scooters have been cut, and we’ve seen you walking some of them over here. Do you know what that’s about?” we asked.

“I have no idea,” he responded. “There’s a lot of vagrants around here.”

The man wouldn’t answer our questions as he walked away and went into the Milago building. We went back to take a look at the scooter he had just dropped on the pile and looked at the brake line. Again, it was cut.

“What do you do when you bend down to get the scooters?” we asked.

“I don’t know what you’re talking about,” the man responded.

'My life has been turned upside down.' Riders suing scooter companies speak out

We went inside the Milago to find a manager. We spoke to a woman at the front desk who told us the man works with the Milago. The assistant manager wouldn’t give her name or his but she said they ask all of their employees to clear scooters from the property because they can’t be parked there. But she said she doesn’t know anything about someone cutting brake lines.

To be clear: we didn’t get a close enough look to see exactly what the man was doing to those scooters when he bent down. We only know that the brake lines were cut at some point.

We called all the scooter companies and the Austin Police Department to let them know what we found. By the time we left a couple of hours later, Bird was the only company that collected a broken scooter.

So, we left warning notices on the rest of them.

But Greene hopes those companies remove and repair all the damaged scooters soon.

“You can literally see the brake line is completely detached from where it is. There’s no way to stop on that,” Greene said. “And usually they have the fender back brakes, but this one doesn’t look like it has that. So, yeah, that could have been really bad.”

APD said the scooter companies need to report the damage to begin a criminal investigation. There’s no word yet on whether or not the companies that own the scooters have filed complaints.

A spokesperson for Bird sent this statement to the KVUE Defenders:

"Vandalism of any kind should not be accepted, full stop. Vandalism can include damage to local storefronts, broken windows of cars, and theft or destruction of e-scooters. At Bird, we have zero tolerance for vandalism and aggressively address it when it occurs in communities where we are meeting peoples’ needs for sustainable transportation options. We encourage everyone in these communities — whether they ride Bird or not — to report vandalism done to or with our vehicles as we are committed to acting swiftly and effectively. If you see something, report it to us at hello@bird.co. Bird investigates all reports of vandalism and takes appropriate measures, including working with law enforcement."

A spokesperson for Lyft sent this statement:

"The safety of our community is fundamental to Lyft and the behavior described is unacceptable. Within minutes of being informed by the City of Austin of this alleged incident, we sent a team out to inspect all Lyft scooters in the area and take the appropriate action. After investigating, we confirmed that the brakes on all Lyft scooters were intact."

Lyft also clarified that the lines cut on Lyft scooters were lines to the brake lights and followed up stating, "Any scooters that were affected were disabled and removed from service."

The Austin Transportation Department urges riders to remember to thoroughly inspect a scooter before renting and getting on one. You can find more information on scooter safety on the City's website.

Scooter companies, APD and the Transportation Department all agree that if you see a problem with a scooter, say something. You can report safety problems directly to the companies via their apps, and you can also report them to Austin 311.

When her 103-year-old grandma couldn't make it to her wedding, this Austin bride came to her