"I don't call it bravery; I call it doing your duty." 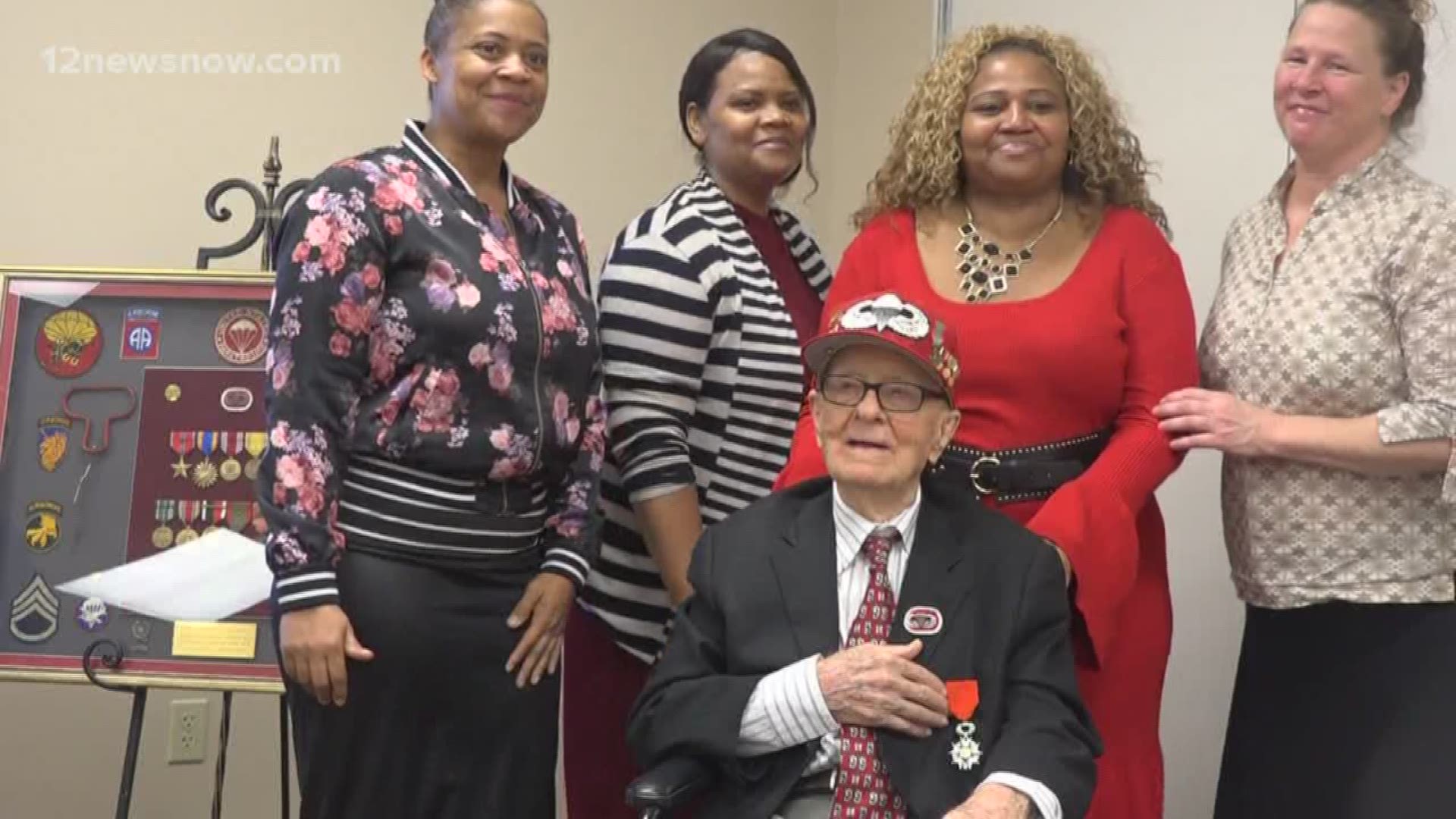 GROVES, Texas — World War II Veteran Fred E. Brown of Port Arthur was awarded the Medal of Knight in the French Order of the Legion of Honour.

In a private ceremony at 2 p.m. on Thursday, The Consul General of France presented the medal to Brown in recognition of his contribution to the liberation of France during WWII.

The Medal of Knight is the highest distinction of France. The medal was given to Brown on his birthday, Nov. 21.

The history of this award began in 1802.

“Since its creation, the award has remained the highest, most prestigious decoration in France and is given solely as a recognition of merit or bravery,” said Alexis Andres, Consul General of France.

A few years ago, Andres says France decided to follow a more active policy of awarding this medal to the American veterans of the World War II.

Brown has a strong affinity for Port Arthur, although he was born in Geneva, Alabama. He moved to Port Arthur with his mother in 1936.

In April 1943, Brown was drafted into the Army at 18 years old. At Fort Sam Houston in San Antonio he volunteered to jump out of an airplane due to a recruiting Paratrooper on the base.

“I’ve taken some big risks in my life," said Brown. "But I knew what I was getting into; I never cried about it. I felt like it a few times but I never cried."

After training, Brown “fought in Italy before parachuting into Southern France during the Allied airborne invasion of Aug. 15, 1944.”

“On the ground, he later fought in the battle for Col de Braus and the liberation of Sospel in the Maritime Alps, where he was in combat against the Germans for more than 90 days.”

Among other service medals, Brown has earned the “U.S. Bronze Star Medal for his heroic action in the Battle of Manhay during the Battle of the Bulge in Belgium.”

He also “participated in the Rhineland Campaign that secured a route for the Allies into Germany near the end of the war.” After his wartime service, he returned home to Port Arthur in 1946.

Brown was also active in civic affairs in such as the Port Arthur Lions Club. He also served as a deacon at the First Baptist Church in Port Arthur.

Brown said he practices good habits, which has allowed him to celebrate his 95th birthday in good health. He believes people were made to make their own decisions, risks included.

“There was a guy, an (explosion) came in and blew his right arm off, but it didn’t give me a scratch. Don’t ask me how. You just don’t know how. It’s on my mind all the time, why I made it and you didn’t. That stays with you.”

Brown says he doesn't regret anything and would go back into the Army if he could.

"I don't call it bravery; I call it doing your duty," said Brown.

Navy veteran found in his apartment had been dead for 3 years, medical examiner says

'I’ll have to quit someday, but not today' | 92-year-old Belmont barber has been cutting hair for more than 73 years

The New Normal: Stories from the Storm