Area 3 Report: What remains of El Copano and Aransas City

"Welcome to Fulton Harbor," Captain Tommy Moore of the Skimmer Boat Tours said. "Both Rockport and Fulton harbors were originally established as cattle shipping ports for the large ranches in the area." 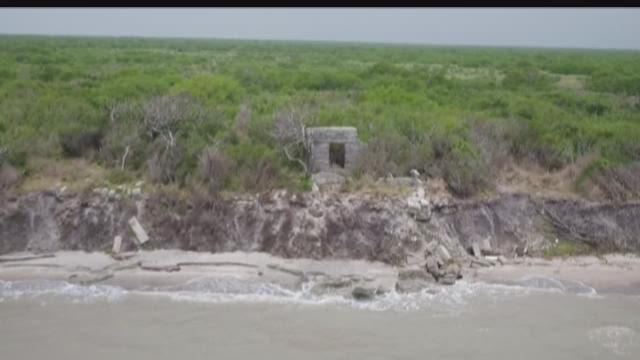 "Welcome to Fulton Harbor," Captain Tommy Moore of the Skimmer Boat Tours said. "Both Rockport and Fulton harbors were originally established as cattle shipping ports for the large ranches in the area."

Captain Tommy Moore usually takes people on birding tours in the Rockport-Fulton area, but he took 3News on a history lesson on water.

Pam Stranahan is the Vice Chairman of the Aransas County Historic Commission. She knows the history of the area. Captain Moore took 3News to check out two ghost towns that Stranahan and the Commission have researched and studied. One was Aransas City, the other El Copano.

"El Copano has a real big problem with a water source, and there's a spring over in Aransas City so that was a more ideal location for a community," Stranahan said.

When you first enter Copano Bay there are a number of modern homes located on the southside of the shoreline. Those sit atop where Aransas City once stood. The town was founded around 1837 by James Power. It became the county seat of Refugio County, but because of Indian raids, politics and the founding of Corpus Christi, Aransas City became a ghost town by 1847.

"One of the merchants who had a store here was named Kinney, and if you're familiar with the history of Corpus Christi, he then moved from here to Corpus Christi and set up shop over there," Stranahan said.

Artifacts from the town have been discovered over the years and the Historic Commission now has those in hand. There are pieces of fine china of the day -- even a button from the Republic of Texas days.

The next stop was the Refugio County side of Copano Bay -- what's left of El Copano. The non-profit group Preservation Texas had listed the site on its Most Endangered Historic Places. It's located on private land and there are no known preservation efforts that have been tried to save the important part of the State's history.

All that's left is the remains of a few shell crete built homes. Shell crete is kind of like concrete made from sea shells. The Texas Archaeology Commission came here in 2005 and mapped the area and believe that the first row of homes there have already fallen into the water. The next row is following suit as Mother Nature continues to take her course and rob future generations of being able to see first-hand a historical place left to ruins.