1 killed, another hospitalized after police shooting in Austin

Two APD officers were involved but they were not injured. 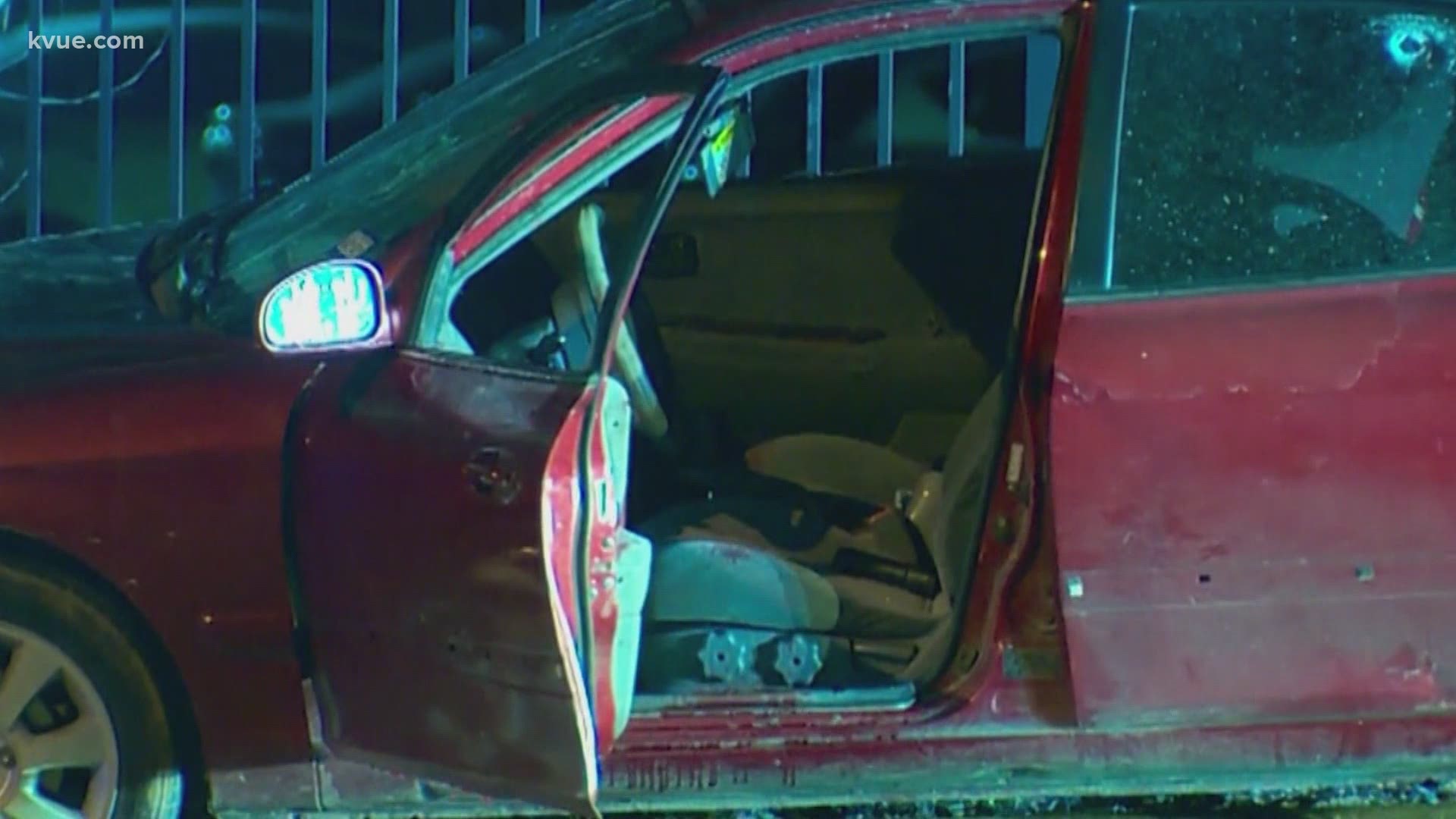 AUSTIN, Texas — One man was killed and another person was injured after a police shooting early Tuesday morning.

The shooting happened on a public road in the 2500 block of Wickersham Lane. The call came in at 12:34 a.m.

According to the Austin Police Department, two APD officers were involved in the shooting, but they were not injured. Two adults were also involved. A man was killed and the woman in his passenger seat was taken to an area hospital with life-threatening injuries. She is in stable condition.

Police later identified the man who was killed as 27-year-old Alexander Gonzales.

A witness captured the shooting on video. Warning: The video below contains graphic content that some may find disturbing.

During a press conference at 4:45 a.m. Tuesday, Chief Brian Manley gave an update on the shooting. Manley said the incident initially involved an off-duty officer in his personal vehicle. When the officer turned on Wickersham, a car following cut him off, Manley said.

The officer saw the driver pull out a gun and shots were fired, police said. The officer then called 911 to report the incident.

You can watch the full update in the video below.

The suspect began to drive away and the off-duty officer followed him, according to police. The suspect's car eventually came to a stop. Other officers who arrived at the scene began giving commands to the driver and, as he moved around the vehicle, he tried to open one of the car doors and that's when an on-duty officer shot him.

Police added that they found a gun at the scene.

The off-duty officer was not in his gear, so there is no body camera video at the beginning of the incident. More Austin police officers later arrived on the scene, around 12:37 a.m., and body camera video was taken from that point on.

#BREAKING: Police are on the scene of a deadly officer-involved shooting on the 2500 block of Wickersham Ln. According to @Austin_Police, the two officers involved were not hurt, 1 person died and another was taken to the hospital with life-threatening injuries (both adults). pic.twitter.com/bcJ51sFHym

Manley said the man was pronounced dead at the scene. A child was in the backseat of the vehicle and was not injured.

The Office of Police Oversight was on the scene, as well as APD Chief Brian Manley.

By Tuesday evening, people had left flowers for the deceased on scene and protestors arrived carrying signs with messages against the police department. A small group of protesters was also seen at APD headquarters.

Flowers have been left at the scene of a fatal officer-involved shooting this morning in #Austin. The deceased has been identified as 27-year-old Alexander Gonzales. (Photo by @MariSalazarTV)

If you have any information or video footage regarding this incident, call APD.

APD said it will conduct two concurrent investigations into this incident: a criminal investigation by APD's Special Investigation Unit in conjunction with the District Attorney's Office and an administrative investigation that will be conducted by the APD Internal Affairs Unit with oversight from the Office of Police Oversight.

What happens next in this investigation?

KVUE's Tony Plohetski joined KVUE Tuesday morning to talk about what happens next. He said the investigation will focus on what prompted the officers to fire shots at that moment.

"We know officers can use lethal force under the law, but they must be able to articulate and spell out a reason that they fired those rounds," he explained. "If they can do that, they can potentially meet their burden of using lethal force. But if not, they could potentially face criminal charges or administrative discipline."

Experts say that investigators will consider all of the circumstances that led to the shooting, and will also consider the actions of the woman who was in the car.

Under Austin police policy, officers can take law enforcement action while they are off duty, particularly if there is an urgent threat, but are encouraged not to.

Another aspect that this investigation will focus on is what was in the range of those police officers when they fired shots and why the off-duty officer was in that area.

“The Office of Police Oversight has been briefed regarding the officer-involved shootings that occurred this morning and yesterday," said Director Farah Muscadin. "We will closely monitor the internal affairs investigations for both incidents and work with APD to release the critical incident community briefing videos."

Travis County District Attorney Jose Garza, who took over the agency this week, has said that he plans to take all police shooting cases to a grand jury for independent review.

How to get the COVID-19 vaccine in Texas

Here's how to check the status of your stimulus payment