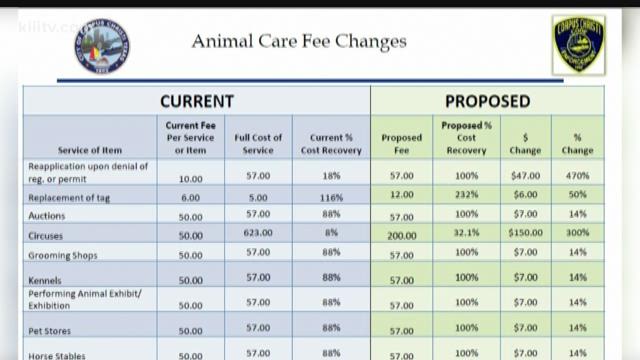 Several departments in the City of Corpus Christi are proposing higher fees -- some going up as high as nearly 300-percent.

The fee increases involve hundreds of different City services and are not related to the budget shortfall for next year that was recently discussed in City Council.

Rocha said the biggest fee changes would not affect the majority of citizens who are covered by Medicaid or Medicare.

"The bulk of the people that are going to be impacted are those that have private insurance or self payers," Rocha said.

"This is just an effort to come closer to the amount these services are costing us," Budget Director Eddie Houlihan said.

Houlihan said it's part of the City's effort to live within their means and not raise taxes.

"We continue to work in every department to be as efficient as we can," Houlihan said.

Houlihan said most of the fees involved have remained the same for years in many cases, but compared to other cities in our population range, the fees are still less than most.

"We're anywhere from 35- to 50-percent below most of our benchmark cities in a lot of these fees," said Jay Ellington, Director of Parks & Recreation.

Ellington said his department collects fees for the largest number of general fund services in the City.

"Everything from rentals of property to program fees to recreation and swimming and all types of fees in our system," Ellington said. "I think we have over 330 fees as part of our park system."

Council approved the fees in first reading and will consider a final vote next week. You can find out more about each department's fee increase proposals in the document below: