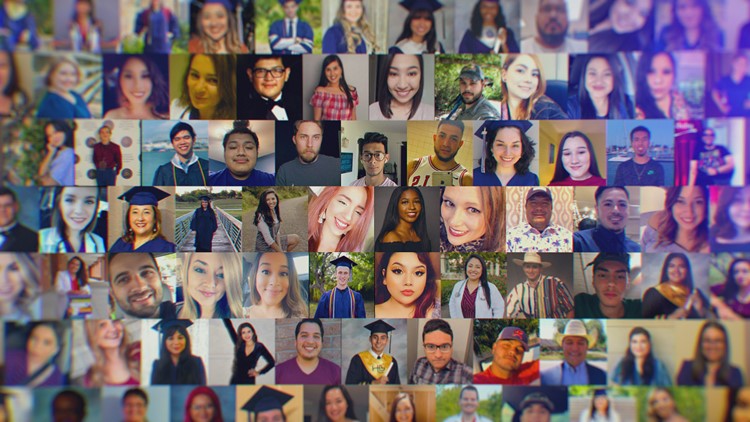 CORPUS CHRISTI, Texas — After those last projects are turned in and finals are taken, Del Mar College prospective graduates would normally prepare to take center stage to receive their certificates and degrees.

With the impact of the coronavirus 2019 pandemic, graduation plans have changed to virtual environments across the nation's colleges and universities.

"For the DMC Class of Spring 2020, a 'virtual' commencement ceremony scheduled May 29 will mark history for the College as a new experience and will feature congratulatory videos, remarks, the reading of participating prospective graduates’ names, music and even an 'after-party' video with Corpus Christi native and Hip Hop Fusion artist El Dusty," says Del Mar officials.

Del Mar College will award a combined 989 certificates and associate’s degrees to approximately 846 prospective Spring 2020 graduates with 290 of those students signing up to participate with the virtual ceremony, organizers say.

"Students will also be given the opportunity to 'walk the stage' at a later date when the College can schedule an in-person event when circumstances permit," adds Del Mar officials.

Organizers say several social media platforms are available to access the May 29 ceremony beginning at 6:30 p.m.

The formal commencement begins at 7 p.m., and the "after-party” will start after 8 p.m.

The public is invited to watch all portions of this celebration by using one of the following links:

"Student videos will serve as the keynote portion of the event, and parting remarks will come from graduating Student Government Association President Natasha Perez. College President and Chief Operating Executive Officer Mark Escamilla, Ph.D., and DMC Board of Regents Chair Carol A. Scott will also speak with the president also officiating the commencement," added organizers.

Although next week’s commencement ceremony is virtual, viewers can expect the same fanfare Del Mar College presents during normal circumstances, including the Music Department’s performance of “Pomp & Circumstance,” only this time through multiple video screens, the national anthem and the traditional Viking Thunder Clap, according to organizers.

"Rounding out the event, Latin Grammy-nominee Dusty Oliveira, or “El Dusty,” and friends have prepared a video “after-party” for graduates, family, friends and the general public to enjoy and celebrate the DMC Class of Spring 2020.," states Del Mar authorities.

"The producer, DJ, and nu-cumbia pioneer is recognized for translating “the Southern Texas border experience into new barrio anthems where the MPC2000 sampler and chopped clips of Latin music history collide," added officials.

El Dusty received a Latin Grammy nomination for “Cumbia Anthem" and other credits include Rolling Stone magazine’s “10 New Artists You Need to Know,” Billboard’s “New Latin Act to Watch in 2016” and Pandora’s “Latin Artists to Watch 2016.”