The latest executive order issued Monday by the governor bans vaccine mandates across the state. 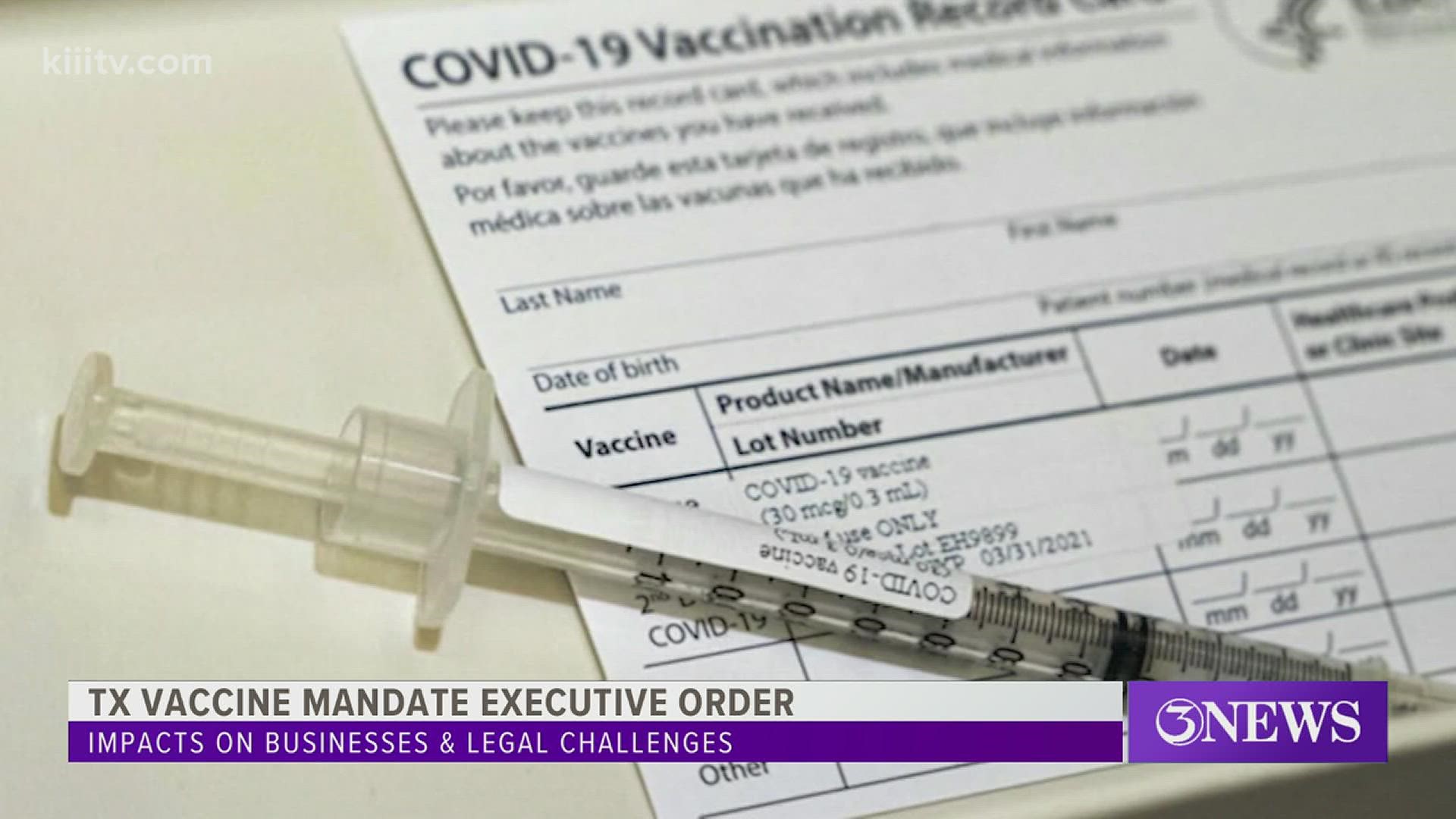 CORPUS CHRISTI, Texas — Governor Abbotts latest executive order issued Monday bans vaccine mandates across the state. This could have a big impact on businesses across Texas as under the order employees or customers now would not have to show proof of their vaccination.

Last month President Biden directed the occupational safety and health administration better known as OSHA to write a rule requiring employers with at least 100 workers to require employees to get vaccinated or have weekly negative test results.

The federal rule applies to an estimated 80 million workers and has already been threatened with lawsuits from the GOP attorneys general. The labor department is still working on formal rules. So how does the governor's order impact coastal bend business and what could it mean for us in achieving herd immunity?

So, there's several parts to this 3News spoke with Coastal Bend experts to break it down.

“It didn’t come as a total shock because if we look across Texas now joins 23 other states or so that are trying to push back against this federal mandate,” said Travis Braidwood, Associate Professor of Political Science at Texas A&M Kingsville.

“Is Texas going to line up amongst these others to get involved in these lawsuits,” said Braidwood.

“Now they’re facing this dilemma. What do we do? Do we obey the federal government's mandate, or do we obey the governor's mandate?” said Braidwood.

Business like Brookdale Senior Living who have locations across the country including here in the Coastal Bend.

In August they required vaccines for staff and in response to this new order they shared with us the following statement.

“Residents and their families trust that we will continue to take appropriate measures to help protect against the spread of the evolving COVID-19 virus. Thus, we decided to implement a COVID-19 vaccine requirement for associates, subject to limited exceptions, and where allowed by law. We will be updating our process to meet the standards set forth by the Executive Order issued by Governor Abbott.”

Though it sounds they’ll be complying Braidwood says it’s not going to be so cut and dry for other businesses like those that are based in Texas or partially.

3News spoke with Dr. Kim Onufrak with the Public Health District, she weighed in on the new order.

“Texas has one of the lowest vaccination rates in the country and that’s not where we need to be at this point in time and I think this vaccine mandate is just going to not help us reach our goal of herd immunity,” said Onufrak.

“This should never have been a political issue and I really just wish that people would listen to public health and listen to the doctors that are telling you, you should be vaccinated, and this is why.”

And when we look at the vaccination rates just for Nueces County, we’re close, but not quite there yet.

“We’re getting closer to 60% it’s not at 70% where we would like to be so we’re slowly starting to creep up, we’re doing a little bit better,” said Onufrak.

So, what happens now and who has the upper hand?

“Right now. Texas has the high ground, but we’ll have to see what happens in terms of litigation,” said Braidwood.

Governor Abbott’s order has the upper hand and Braidwood say's that is because the federal order is still being fleshed out by OSHA, so that means until they have clear guidelines this is where things stand right now.