These cases come from people in their 20s and the spike has some calling for more testing options. 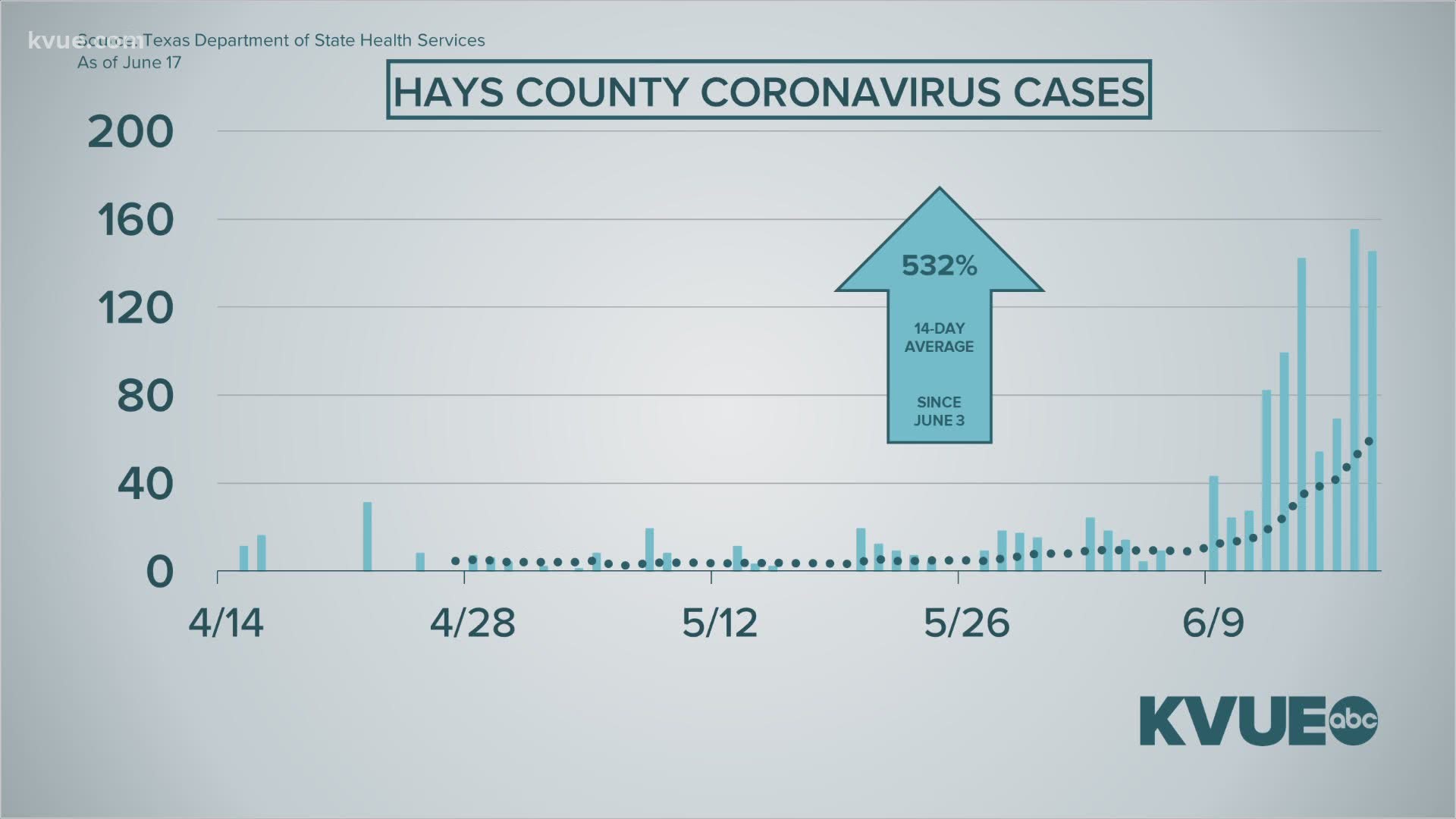 During a press conference Wednesday afternoon, Hays County epidemiologist Eric Schneider announced 58% of the new cases reported since June 10 are people ages 20 to 29 and are residents of San Marcos.

"At this point, most of our residents should assume that they take the risk of coming into contact with someone who has COVID-19 as soon as they leave their homes," Schneider said. "Let's work together to do the right thing. Let's protect our families, our friends and the entire Hays County."

The last time the county reported more than 100 new cases was four days prior when it reported 142 cases on June 13. Since the beginning of the pandemic, the county has reported a total of 1,238 cases. About 903 of them remain active.

"We're in a really scary place here in Hays County," State Rep. Erin Zwiener (D-Texas, District 45) told KVUE on Tuesday. "About one in every 300 people is currently an active diagnosed COVID-19 patient. And that's just the folks we know about."

Zwiener shares a similar concern with local leaders, who are urging people to wear masks in public and maintain social distancing.

Zwiener believes Gov. Greg Abbott minimized the situation in Hays County during a Tuesday afternoon press conference when he attributed a spike in cases to numbers that were "batched together and averaged out."

People between the ages of 20 and 29 make up more than half of the total COVID-19 cases in the county.

During Tuesday's press conference, Abbott said these types of results "are typically from ... people going to bar-type settings." But Zwiener wasn't as quick to blame young people.

She does, however, want them to get tested, especially if they've been to mass gatherings, like bars and protests.

Hays County currently lists at least 12 testing sites on its website, but most require an appointment and don't offer drive-thru testing. Zwiener said that needs to change.

"I understand that some testing has been available, but the process has been too cumbersome to be fully utilized. We need something that is easy and free and that everyone knows about," she said.

Her office has been working with state agencies to host pop-up testing sites within the county. The testing site in San Marcos on Sunday tested at least 700 people, according to health officials.

'I was frightened, I was scared' | Protester recounts the moment he says Austin police hit him 3 times with bean bag rounds