'We're not leaving.' City crews begin cleaning up homeless camps near the ARCH in Downtown Austin

On Tuesday, a day after the cleanup began, police issued one citation for illegal camping and made one arrest outside the ARCH. 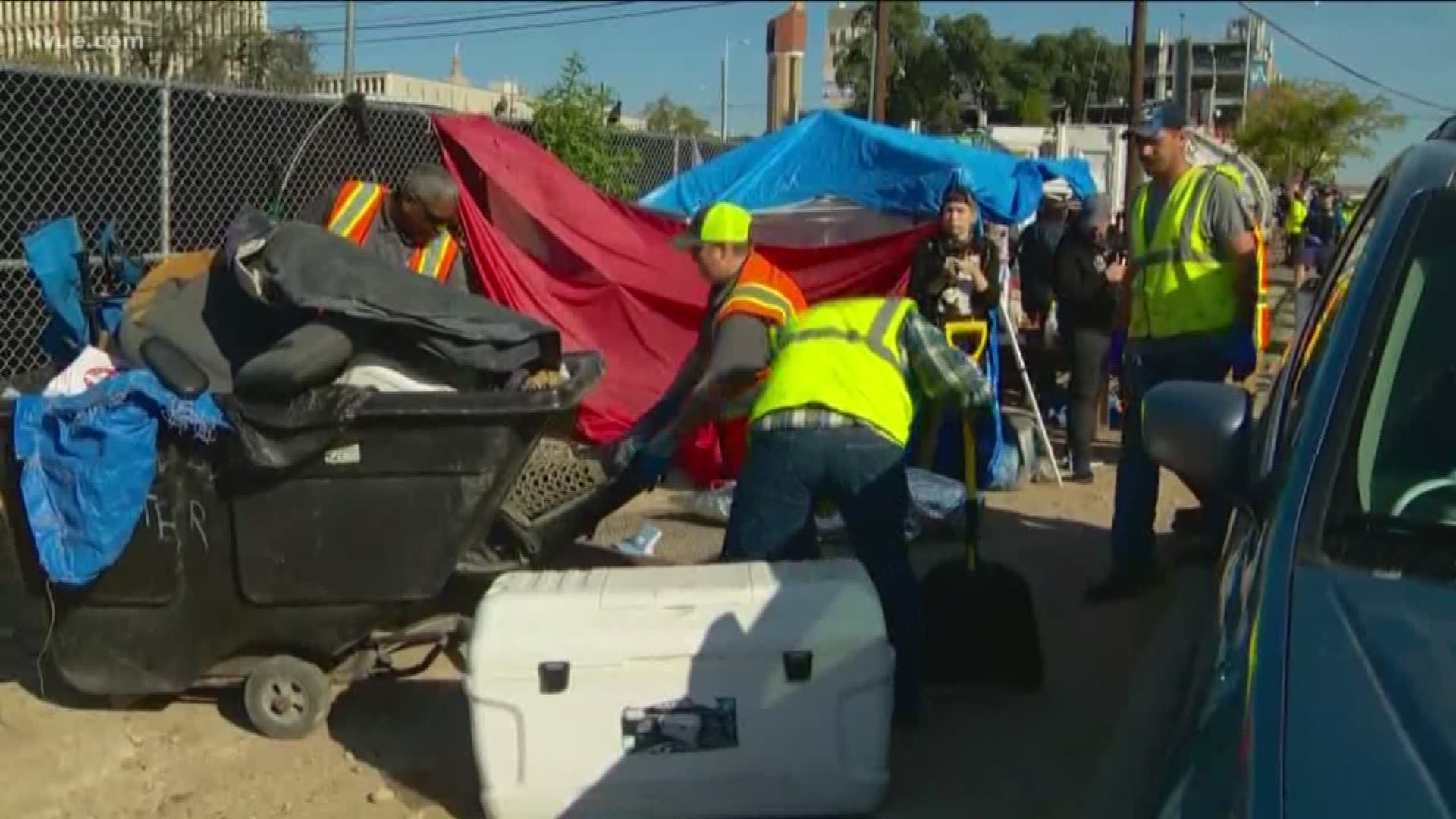 AUSTIN, Texas — On the same day the Texas Department of Transportation was directed to start cleaning homeless camps under overpasses, crews have started cleaning camps near the Austin Resource Center for the Homeless (ARCH) in Downtown Austin.

On Tuesday, a day after the cleanup began, police issued one citation for illegal camping and made one arrest outside the ARCH.

New homeless camping bans on sidewalks, near the ARCH go into effect Monday

Officers with the Austin Police Department were on the scene as crews cleaned. APD told KVUE that district representatives along with Austin Resource Recovery will be shutting down Neches Street between Seventh and Eighth streets to conduct a cleanup of the area.

"This morning APD came through with Austin Resource Recovery to let individuals know they were going to be enforcing the no camping around the ARCH," said Greg McCormack, the executive director of Front Steps. "Made sure everybody got their personal belongings, anything that was valuable, took with them what they wanted and anything they left they would dispose of."

APD again went out with Austin Resource Recovery around 4 a.m. on Tuesday for about an hour.

Some homeless people outside the ARCH said they would not leave, saying the sidewalks are the safest place for them.

"We’re not leaving. For them to come up with these ordinances and not think about, 'Oh, where are these homeless people going to go,'" said one homeless man. "This is the safest place for me. There’s cameras around here. It’s a safe place. There’s nowhere else for me to go but under a bridge and put my safety in jeopardy? No, absolutely not."

At the scene of the cleanup, protesters could be seen speaking into loudspeakers, urging the City to leave homeless' belongings alone.

"With the repeal, it’s a death by a thousand cuts," said one protester. "There’s nowhere for people to go. Nobody has any answers. People are going to go back into hiding or find hiding for the first time or die."

KVUE's Kalyn Norwood captured some of the scene via Facebook live:

WATCH: City crews begin cleaning up camps near the ARCH in Downtown Austin

In July, the Austin City Council voted to lift its ban on sitting, lying and camping on Austin's streets. In October, councilmembers voted to make changes to the homeless ordinances.

Camping, sitting or lying downtown around the ARCH is now banned, within a quarter-mile of the area. That rule will eventually apply to the South Austin homeless shelter when it is built.

Councilmembers also decided that camping on all city sidewalks will now be banned, but sitting and lying down will not – unless it is 15 feet from an operating business.

"Regarding today’s cleanups around the ARCH, this was a pre-planned initiative called 'Guided Path' that has been in the works for a few weeks. It was coordinated with the COA Homeless Strategy Office, Front Steps, Integral Care, and ECHO to name a few. Prior to today, persons around the ARCH were offered services and resources. The Austin Police Department’s responsibility was to make sure everyone was safe and to gain compliance in moving while persons experiencing homelessness were provided resources. We did not make any arrests nor did we issue citations. The cleanup had been previously planned for 10/29 and then 10/31 but was rescheduled again to this morning due to inclement weather."

Austin's Bull Creek Foundation: Do not decorate Loop 360 trees for the holidays