According to First Assistant District Attorney Angelica Hernandez, the judge and her staff watched the jurors deliberate live on camera without sound. 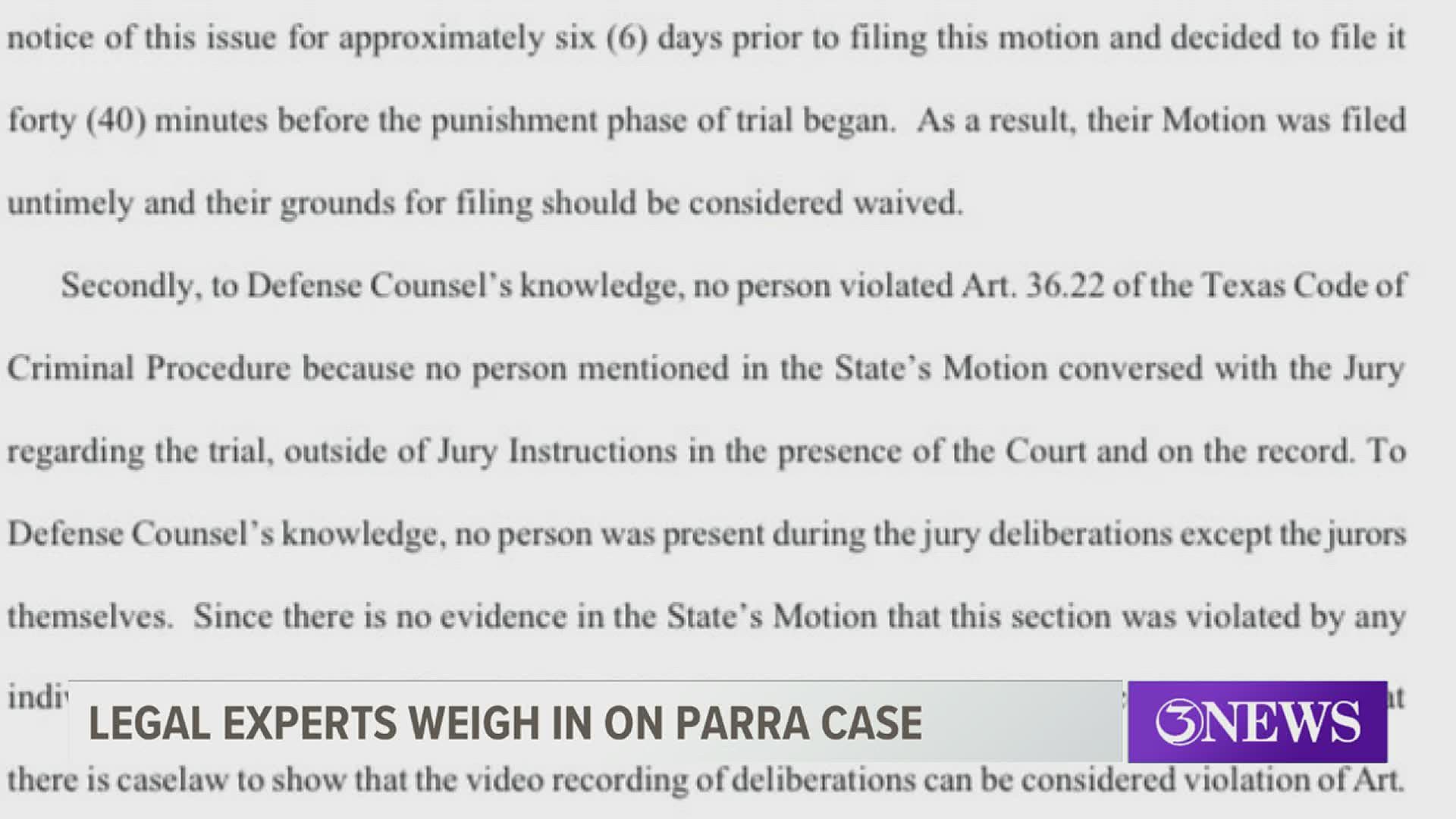 NUECES COUNTY, Texas — The Nueces County District Attorney's Office is still awaiting a new judge to be appointed for the punishment phase in the trial of Derek Parra.

214th District Court Judge Inna Klein recused herself from the case Monday after allegations came through that she and her staff, along with prosecutors and defense counsel, watched secret jury deliberations through a camera in the judge's courtroom.

According to First Assistant District Attorney Angelica Hernandez, the judge and her staff watched the jurors deliberate live on camera without sound.

"The judge, the court manager, the court staff, the district attorneys, the defense attorneys, they were able to watch jury deliberations as they happened. Watch the voting," Hernandez said. "Watch the activities of the jury."

Parra was eventually found not guilty, but he did plead guilty to a charge of felon in possession of a firearm.

Klein was supposed to preside over his punishment phase, however after these allegations came to light the DA's office asked that she recuse herself from the case.

"The broadcasting of visual jury deliberations is just a violation of the most fundamental aspect of our criminal judicial system, which requires secrecy," Hernandez said. "The jury is supposed to be protected."

While the court system is going to sort out what did or didn't happen over the claim of the jury being spied on in the 214th District Court, legal experts spoke with 3News and gave some insight on what the law says about issues in regards to this situation.

Wright C. Morrow Professor of Law Jennifer Laurin with the University of Texas School of Law said that the incident raises concerns of undermining the law.

"They're not constitutionally guaranteed a jury that deliberates in private," Laurin said. "However, it has long been understood and consistently followed in terms of tradition that private deliberations and the privacy of the jury is sort of core to effectuating what the right to a jury means."

"Article 36.22 says that no person can be present with the jury while they're deliberating," Manning said.

Additionally, Manning said that while the law doesn't expressively forbid cameras being used to watch jury deliberations, he said the camera is tantamount to someone being in the room with the jury.

"The idea is that it's essentially a means for a person to be present with the jury if there's a video tape in the jury room while it's deliberating," Manning said.

Manning references a 2003 case out of Harris County where there was an agreement to record jury deliberations for educational purposes, but the district attorney objected. The court agreed that those jury deliberations should remain secret.

Manning does believe there could be some benefit in showing actual jury deliberations, but the overriding concern is to ensure that juries aren't unduly influenced by a camera, and that's why they haven't been used until apparently now.