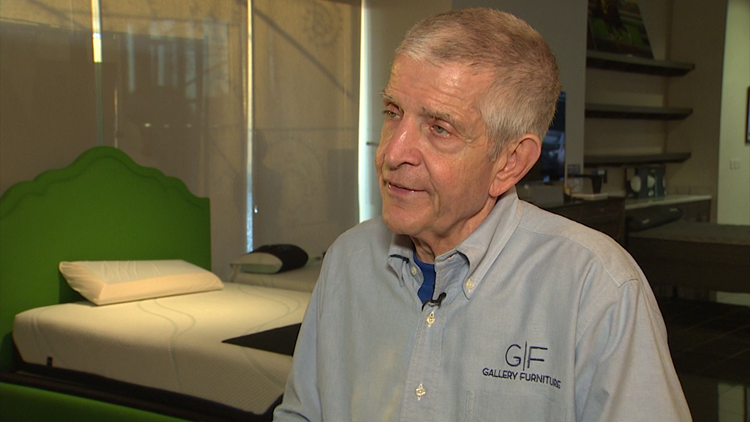 Photo by: KHOU
No insurance companies would give McIngvale an acceptable rate in the event of an Astros win, so he turned to Vegas to hedge his bets.

HOUSTON — Jim "Mattress Mack" McIngvale is once again doing his World Series promotion: if you buy a mattress and the Astros win, you get to keep the mattress for free.

No insurance companies would give McIngvale an acceptable rate in the event of an Astros win, so he turned to Vegas to hedge his bets.

More than $12 million in mattresses were given away back in 2017, according to McIngvale.

“If the Astros win it all, you get your money back from Gallery Furniture," McIngvale said.

The Houston Astros are on a roll, and customers think it might be a good time to gamble on a win.

Mcingvale said he couldn’t get a good rate from the insurance companies for his promotion because the Astros are doing so well right now.

"In 2017, we didn’t have any insurance, so I had to hedge in Nevada by betting at different establishments in Nevada, and that turned out very well," McIngvale said. "This year, I didn’t buy any insurance after the trade. The Astros got real popular, so the insurance price went up. So we’re going to do the same thing we did back in 2017. Already done a lot of it, so we just hope a lot of customers come in and buy these mattresses, because the best thing we can do is give away lots of mattresses to our customers if they win it all.”