Jason VanHorn and Jonathan Rowe are featured in the sixth episode of "Say I Do." 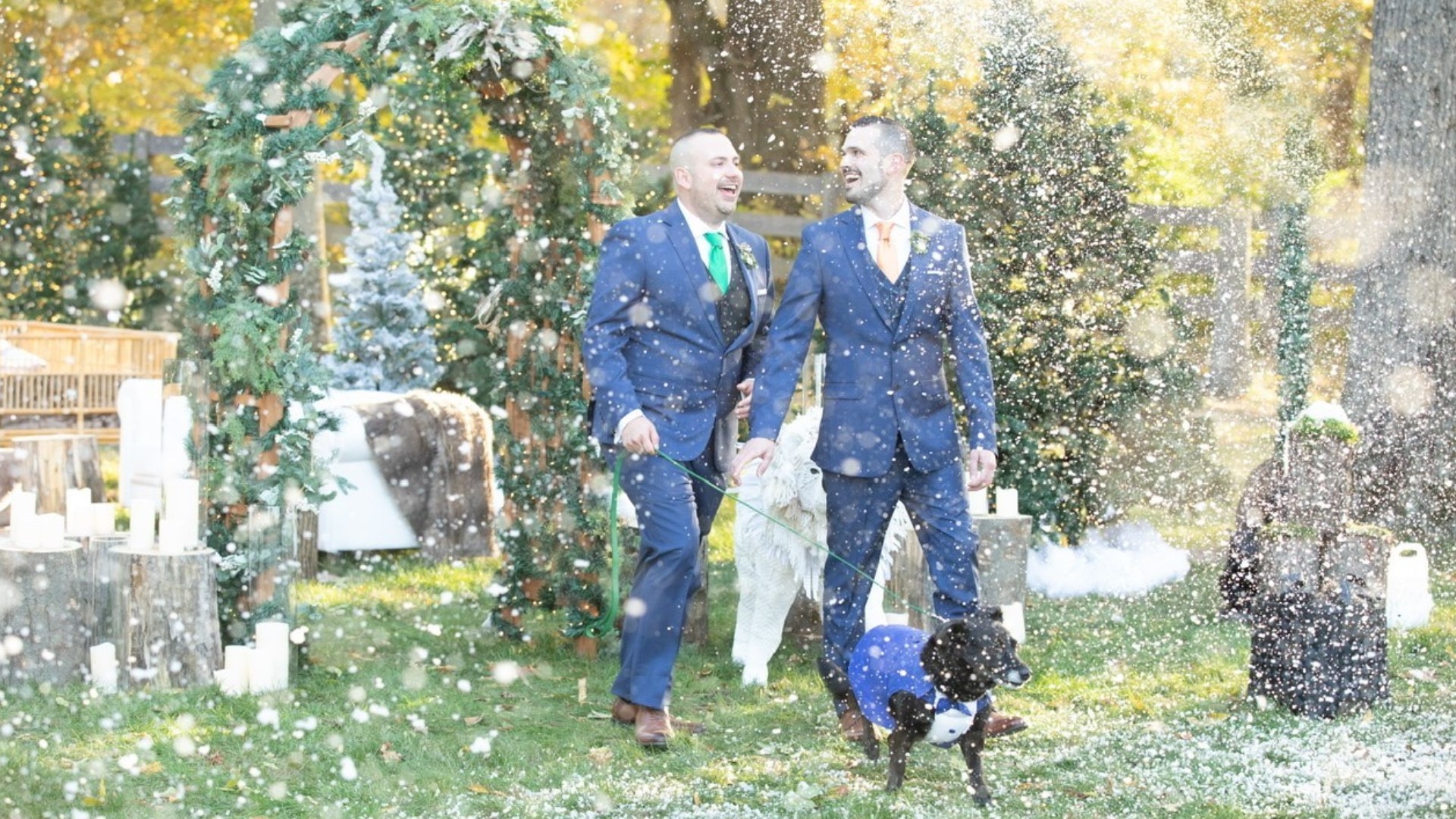 INDIANAPOLIS — As COVID-19 continues to limit what we can do, more of us are turning to TV for entertainment. That’s part of what made the Netflix show “Tiger King” such a success earlier this year.

Now, a new show reminds us of what life and events like weddings were like before quarantine and social distancing became the new norm.

Earlier in July, Netflix debuted the reality show "Say I Do," and one of the surprises for viewers could be how much of the Midwest is featured on the show. Producers documented couples in Louisville, Cincinnati and three from Indiana — which includes a couple from Noblesville.

“They said the cameras will eventually go away and you won't even notice them and to that I say they are liars because they were definitely there the whole time, Jason VanHorn said as he recalled the experience. "I was so nervous the whole time and tried to act normal and natural."

Jason was in on the secret. He wanted to surprise his fiancé, Jonathan Rowe. The couple has been together for nearly eight years, which includes a major health battle from which Jason successfully recovered. He thought a surprise, lavish wedding would be one way to thank Jonathan for sticking by his side and helping him.

"He kept secrets from me for months," Jonathan said.

The proposal started with the traditional question but with a twist as cameras recorded every moment.

"Will you marry me this weekend?" Jason asked during the proposal inside Lucas Oil Stadium.

As soon as he said yes, a team from the show came rushing onto the field to introduce themselves and explained what they would be doing to make the whirlwind wedding happen in just a short amount of time.

"I like to know everything and be in control, and I remember when I found out, I was stressed," Jonathan said. "In my mind, I was having all these panic attacks, and it was very stressful for sure knowing that all of this was being planned, and I had nothing to do with it or knew nothing about it."

"You had to trust the system," Jason said.

"I had to trust the system, yes," Jonathan laughed.

The team is made up of lifestyle experts Jeremiah Brent, Thai Nguyen and Gabriele Bertaccini, who cover wedding details such as food, clothing, and special events. It is reminiscent of the recently rebooted show, "Queer Eye."

Jonathan has a love for all things Christmas, so the team created a holiday theme despite the October date.

Credit: @danielmichael_photo
Jonathan Rowe has a love for all-things Christmas, so the lifestyle experts on Netflix's reality show, "Say I Do," created a holiday theme.

Guests had to also keep the secret for nine months and not post anything on social media despite several Instagram-worthy moments like a staged snowfall in October.

“I feel like it was kind of difficult to keep the secret,” Jason said.

But they've had far more difficult challenges. Jason beat Stage 4 Hodgkin’s lymphoma during their relationship. Jonathan thought they were off to celebrate that victory when the big question came.

“There were just so many surprises, and it’s something you never get to experience in a lifetime," Jason said. "Knowing that this is a rare opportunity and what a blessing it is to come out of what his cancer ordeal was to something like this, it's just night and day, and is pretty incredible."

And to think just five years ago, their marriage wouldn't have been legal. Now, it's a love story that’s going global.

“We've had messages from Australia and South Africa, so just knowing it's on a worldwide platform like this with people from other countries to see it is humbling,” Jonathan said.

They couple planned to go on a honeymoon in May, but COVID-19 prevented that.

The couple gets a surprise on the show toward expanding their family – but no spoilers here! The couple's special wedding is the sixth episode in the one-hour feel-good show.