AEP hopes to restore power to 95% of customers today

The latest numbers show less than 10,000 of their customers remain in the dark tonight. 3,000 of those are right here in the Coastal Bend. 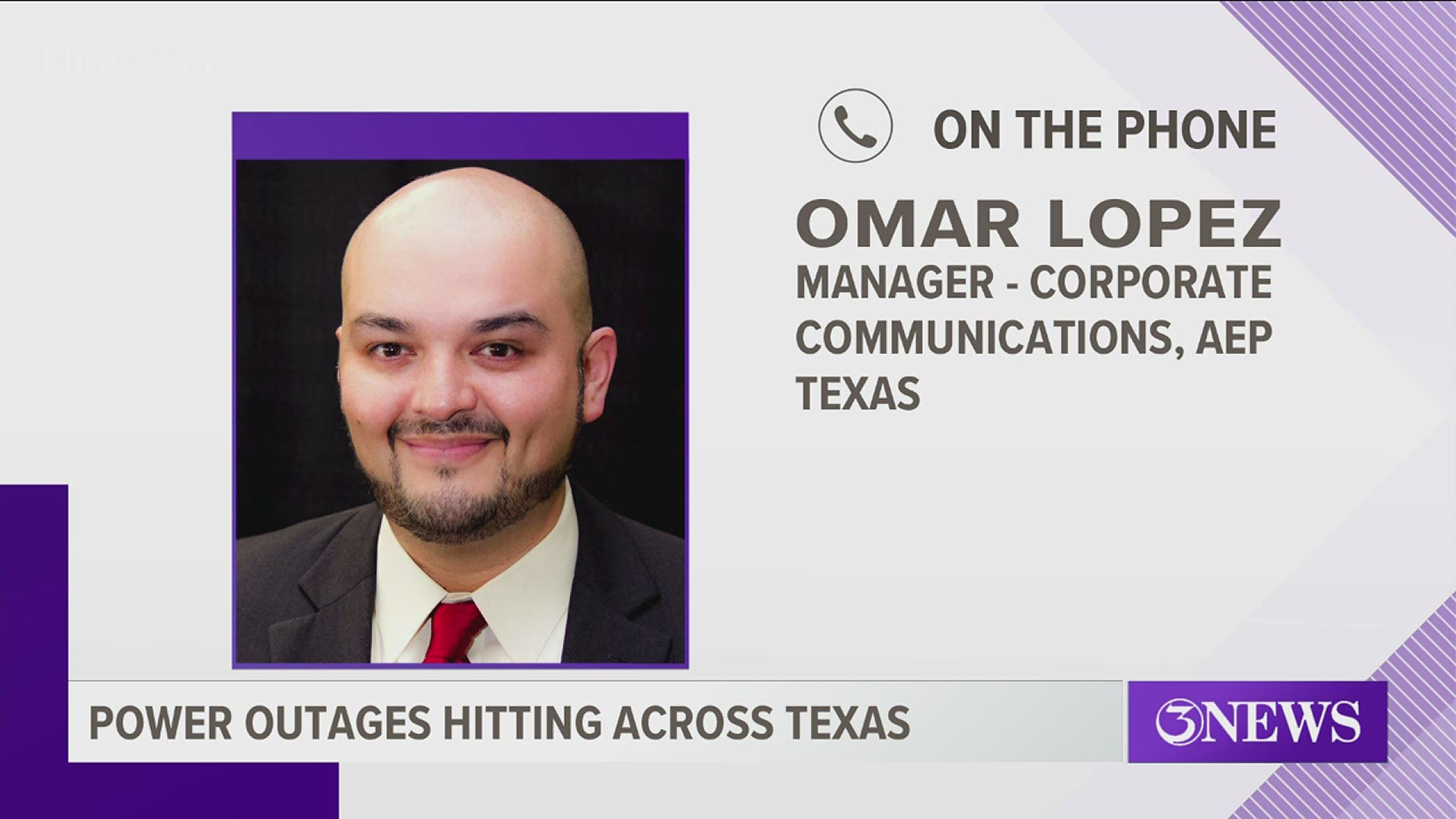 CORPUS CHRISTI, Texas — As of this afternoon, AEP Texas announced that 97-percent of customers are back online. The latest numbers show less than 10,000 of their customers remain in the dark tonight. 3,000 of those are right here in the Coastal Bend.

The power company said they're working to restore power to all customers.

There's more good news from the Electric Reliability Council of Texas. The state's power system announced their systems are no longer in the emergency stage.

It's the first time ERCOT has returned to normal operations since early Monday morning. Leaders said they will now begin the process of analyzing the issues that led to mass power outages this week.

14,000 AEP Texas customers were experiencing power outages in Nueces County early Thursday morning, according to the AEP outage map, and it could be some time before power is restored.

In a late Wednesday update, AEP said it "restored electric service to approximately 125,000 customers Wednesday and increased rotation of electricity as generation increases on the electrical grid. Restoration to those who have been impacted the longest is the top priority." It added, "AEP Texas crews stand ready to restore power to additional customers when ERCOT determines that a sufficient amount of generation on the electric grid makes it safe to proceed."

AEP said earlier Wednesday it was asked by ERCOT to "shed load once again," meaning outages continued across Texas and in the Coastal Bend.

ERCOT on Wednesday directed AEP Texas to shed load once again. With continued ERCOT orders to remove load off the grid, power outages will continue. AEP Texas crews and employees stand ready to restore power when ERCOT signals that sufficient generation makes it safe to begin. On Tuesday, AEP Texas restored power to 3,000 customers identified as critical services still without power. AEP Texas also remains focused on customers who have been without power for the longest amount of time. There is limited flexibility with the amount of load that can be rotated, but restoration of service is our priority to provide relief to those who have been impacted the longest.

AEP Texas was able to rotate some outages today, but challenges on the grid due to insufficient generation prevented us from rotating many of those impacted. Crews remain ready to restore electric service to our customers as soon as power is available. #WeAreAEPTexas

According to the City of Corpus Christi, AEP Texas was waiting for the Electric Reliability Council of Texas, or ERCOT, to give them the go-ahead to begin restoring power. AEP Texas says because of this, outages are expected to continue through Wednesday for some.

ALERT: ERCOT has directed AEP Texas to reduce load on the electrical grid again. Please prepare for more power outages, and for current power outages to continue. AEP Texas crews and employees are ready to begin full restoration of electric service as soon as power is available.

AEP Texas on Monday said they initially had a total 367,000 customers without power in the Coastal Bend area that they serve. However, shortly after 10 p.m. AEP Texas reported that ERCOT instructed companies to increase the number of service interruptions, so that total rose to 441,000 customers before the end of Monday night.

Earlier in the day, San Patricio County also announced that rolling outages will begin there to help reduce demand on the electric grid.

San Patricio County officials said they expect the outages to last from 30 minutes to an hour, but possibly longer. They said the outages will rotate as to not affect the entire area at once.

RELATED: How long do rolling blackouts last? What can you do to help?

This is a last resort effort to prevent a statewide blackout, officials said.

San Patricio County officials said if you lose power, turn off your heating, water heater, and large appliances to enable smoother service restoration. Once power is restored, you should switch the devices back on gradually over the following 30-to-45 minutes. Taking this step will help prevent a sudden surge in demand after power is restored, which could cause a second outage.

RELATED: TxDOT: Harbor Bridge expected to be closed all day Monday. Here are other major road closures due to winter weather across the Coastal Bend.

To view outages, check out our outage map: https://www.sanpatricioelectric.org/outage-map-0