In a joint media conference Thursday, both the PUC and ERCOT told the public they've made changes and are ready for the summer heat. 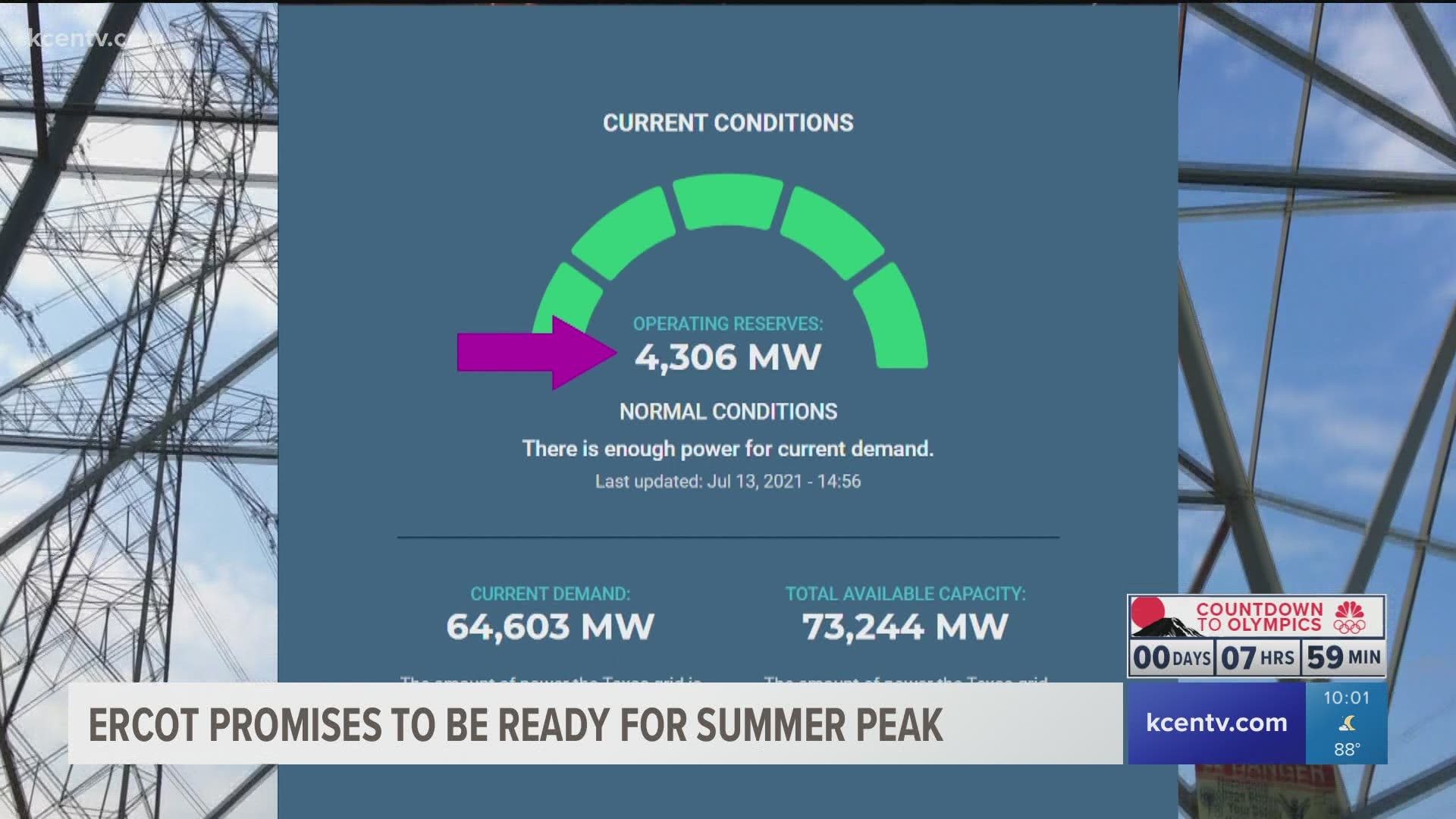 TEMPLE, Texas — Texas will be seeing triple digit temperatures next week but both the Public Utility Commission and ERCOT told reporters they would be ready in a Thursday press conference.

PUC Chairman Peter Lake said ERCOT had made significant changes to the way they operated compared earlier this year and are now taking advantage of additional tools to keep the grid safe.

"The procurement of reserves and the ERCOT authority to force generators on are tools that have been underutilized. I think it's fair to say that operation at ERCOT has turned 180 degrees," Lake said.

Lake said the PUC had directed ERCOT to improve the margin of safety on the grid, and they had done so. This margin of safety includes available power reserves for the grid that are available immediately if something goes wrong, as well as reserves that can turn on quickly which are often called ancillary services.

The first improvement is keeping more power reserves that are available right away. The public can see the amount of available operating reserves on the ERCOT website right now. ERCOT has previously kept up to 5000 MW of reserves on the grid, now they will be keeping 6600 MW.

Secondly, ERCOT is also making sure they schedule additional power generation that can come online very quickly, called ancillary services. Power generators can bid on providing ancillary services, but ERCOT can also force power generators to be available at certain times, by law, if they think the extra power is needed. In those cases, power generators are paid for the cost of running their plants instead of the current market prices. ERCOT Interim President and CEO Brad Jones said ERCOT is now using this power quite a bit more.

Lastly, ERCOT had previously purchased ancillary services a year in advance based on historical trends. Unfortunately, it is very difficult to know exactly when the grid will need more power a year in advance. PUC Chairman Lake said ERCOT will now be purchasing additional services much closer to when they are needed to better anticipate market needs.

"For the first time ever, ERCOT is taking into account real time conditions establishing reserves we need each and every day," Lake said.

In addition to those measure. Jones also told reporters Thursday ERCOT would be faster to call for power conservation in the future when it looked like grid conditions were getting tight. He said this would not be a reason to panic, but something done out of an abundance of caution.

Jones said the demand on the Texas power grid could reach an all-time high next week. He the current record demand is 74,820 Megawatts. 6 News later asked Jones, via phone, if he was confident ERCOT could keep up to 80,000 Megawatts on the grid to stay ahead of a new record demand. Jones did not hesitate in his response.

"Yes, we are confident," Jones said.

Chairman Lake told reporters the PUC is still working to overhaul the Texas energy market as a whole, though he did not have additional details Thursday. Lake was very clear, however, about the result they were aiming for.