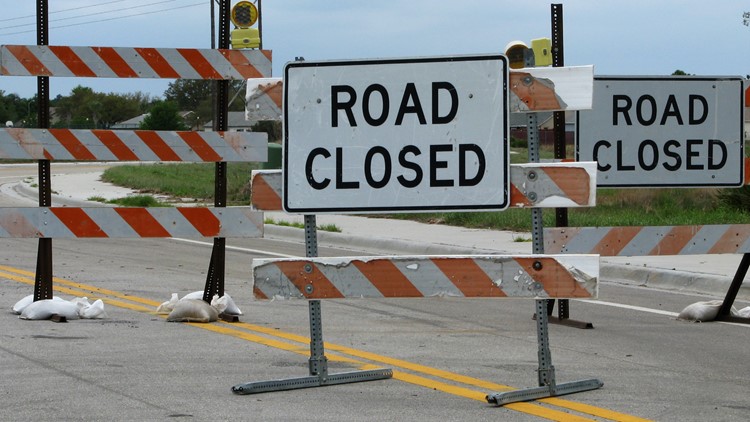 Photo by: KIII
Road Closed signs are set in place by road construction crews and contractors.

CORPUS CHRISTI, Texas — The Weekly Road Closures include locations of road construction and events where lane and street closures affect traffic flow along the City’s major streets and lanes.

All closures are subject to change due to weather, emergency work, or other circumstances.

The road closures for this coming week are as follows:

Northbound Ayers Street is closed at the Crosstown/SPID Interchange (frontage road) intersection. Thru traffic is encouraged to seek alternate routes to access businesses in the area.  Ayers Street is also reduced to one-lane, ONE-WAY traffic from Gollihar Road to McArdle Road (southbound direction only).

Additionally, RTA bus stops will be closed from Gollihar Road to SPID. Bus stops will remain open in the area of Port Ave and Ayers Street.

A list of all traffic changes are included below:

Carroll Lane is reduced to one lane of travel, in the southbound direction, between Brawner Parkway and Gollihar Road.

The right turn lane on Holly Road is closed, but right turns onto northbound Everhart Road will still be allowed from the right travel lane.

Flato Road is reduced to one-lane, one-way traffic flow, in the southbound direction between Agnes Street and Bates Road.

Frio Street is closed from to Mission Drive Hacala Street.

A City Contractor is performing utility work which will require lane closures affecting Mesquite Street and Starr Street. This work is expected to be performed in two phases. A summary of the closures expected in each phase is provided below.

Construction may require intermittent daily closures of local residential streets intersecting Morgan Avenue. Motorists are advised to obey warning signs and flaggers which will guide them through the work zone.

Newport Pass Road has been closed to perform pavement improvements.

There is a full closure of the Rodd Field Road corridor between the intersections of Airline Road (Slough Road) and Yorktown Boulevard. Residents who normally use this segment of Rodd Field, between Airline Road (Slough Road) and Yorktown Boulevard, will be directed to use Lipes Boulevard and Cimarron Boulevard as detour routes. This closure is necessary to make improvements to the Master Channel 31 drainage structures and other improvements associated with the Rodd Field Road reconstruction project.

Travel lanes along Yorktown Boulevard are opened to allow motorists to travel on both sides of the median.

Residents must use Brooke Road and Ametrine Drive as a detour route to access Slough Road.

The northbound right lane will be closed beginning Friday, May 22 along Airline Road from Kristin Drive to Wooldridge Road.

A utility contractor is implementing daily closures of the southbound lane along Fort Worth from Texas Trail and Rosedale Drive.

The intersection of Howard Street at Mexico Street is closed to install underground utilities.

Utility Contractor will continue to implement the following lane closures:

Southbound Greenwood Drive: The right lane will be closed starting approximately 600-feet north of the South Padre Island Drive Intersection. Southbound traffic will then shift to the east, into the left turn lane, and continue as one lane through the intersection.

Northbound Greenwood Drive: The center turn lane will be closed starting 600-feet south of the South Padre Island Drive intersection and continue as two lanes through the intersection.

On Thursday, April 16, an AEP Contractor began implementing daily closures of the southbound right lane and adjacent sidewalk area between Baldwin Boulevard and Ohio Avenue. This work involves replacing utility poles and wires. The projected duration of work is 60 days from the start date.

On Tuesday, May 26, an AEP Contractor began implementing daily closures of the center and the northbound left lane between Catalina Place and Herndon Street. The projected duration of work is three weeks from the start date.

Beginning Friday, May 22 the eastbound thru lanes along Wooldridge Road will be closed from Airline Road to Fleece Drive. Eastbound traffic, between Cimarron Boulevard and Airline Road, will be reduced to one lane approaching the intersection at Airline Road.