Whatawedding! Houston couple among 6 to get married at Whataburger on Valentine's Day

The couples, who are from six Texas cities, tied the knot or renewed their vows at Whataburger restaurants this Friday. 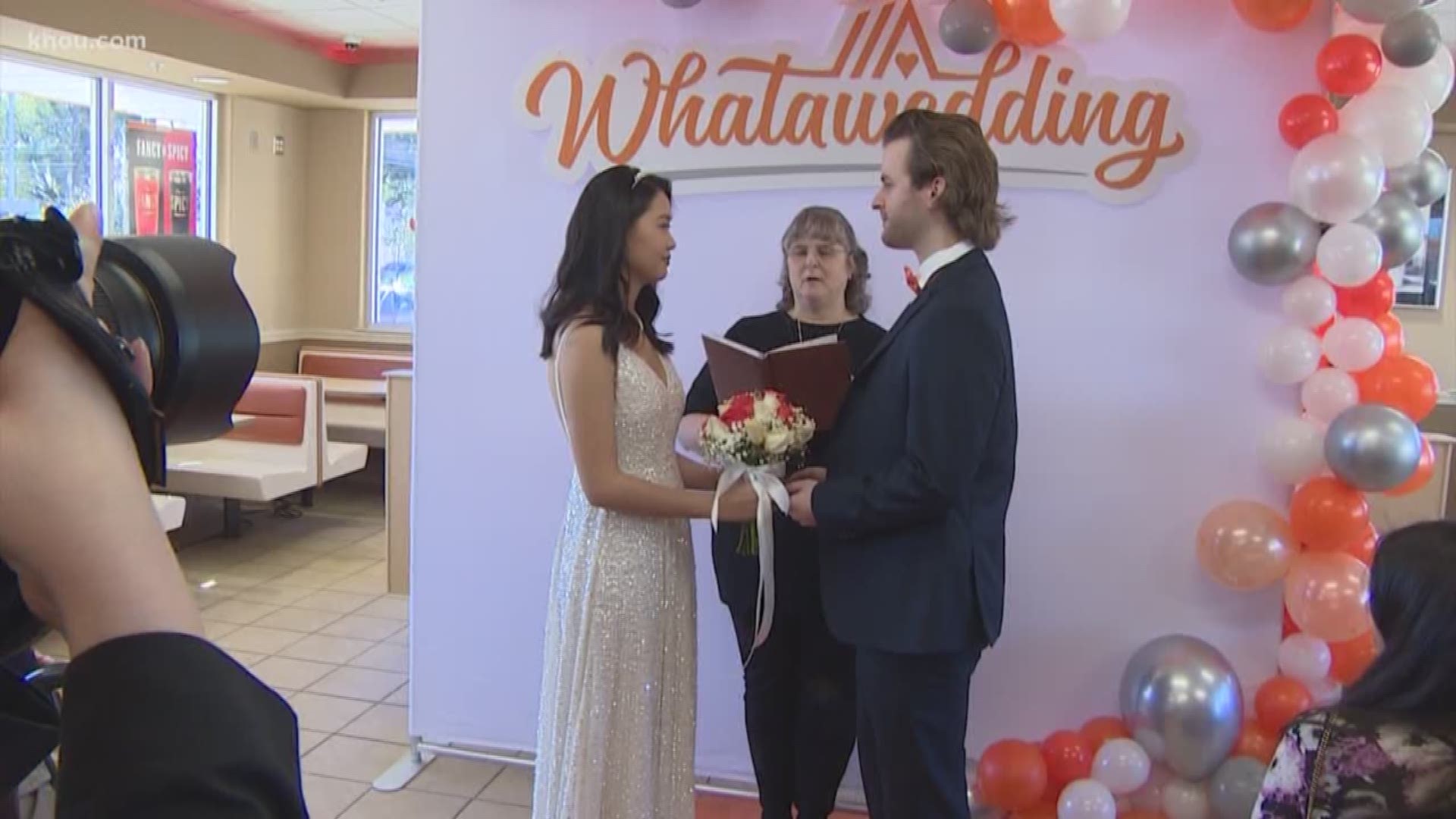 HOUSTON — Six lucky couples, including one from Houston, exchanged onion rings this Valentine’s Day at Whataburger after winning the restaurant chain’s Whatawedding contest.

Whataburger chose the six couples among thousands of nationwide submissions. The couples, who are from six Texas cities, tied the knot at Whataburger restaurants Friday.

RELATED: You can get married or renew your vows at Whataburger on Valentine's Day

The couple said their friends were just as surprised as they were about getting married at Whataburger.

"It's ridiculous and crazy, but our relationship hasn't been the most conventional anyway, so it kind of suits us," Huynh said.

The couple and their guests enjoyed chicken strips and apple pie during the reception.

The remaining winners are:

Myler initially asked out McCloy because her “meme game was strong.” The two are first responders: Myler is in law enforcement, and McCloy is an emergency department nurse. Because of their night shift hours, Whataburger became one of their favorite places to visit together.

Hatcher and Martin come from very different backgrounds: Hatcher is a 9th-generation Texan from from a long line of ranchers, and Martin is from France. Martin had never heard of Whataburger until he met Hatcher.

One of the first things Hatcher taught Martin is to always know your Whataburger order, as many of their dates, including road trips to wineries, ended with Whataburger stops.

The couple is expecting their first baby in March.

Matt and Julie Gray were in the middle of planning an unconventional vow renewal for their 10-year anniversary when they found out about the Whatawedding contest. They first met in January 2009 and have two daughters.

Moss and Leatherwood’s first date ended with a Whataburger trip and talking all hours into the night. During that time, Leatherwood told Moss his coworkers call him “Whataburger” because he was always eating Whataburger. They quickly fell in love and got engaged with plans for a Whataburger-themed wedding.

Arteaga and Welch’s relationship started with a dance and Whataburger. They met through mutual connections at the University of Texas at Austin and got to know each other during many drive-thru adventures at Whataburger. Arteaga and Welch have been together ever since – five years strong!

Arteaga and Welch won a $5,000 honeymoon from Whataburger and plan to spend their vacation in France.

The weddings included Whataburger meals, a select number of guests, a photographer, an officiant and orange and white decorations.