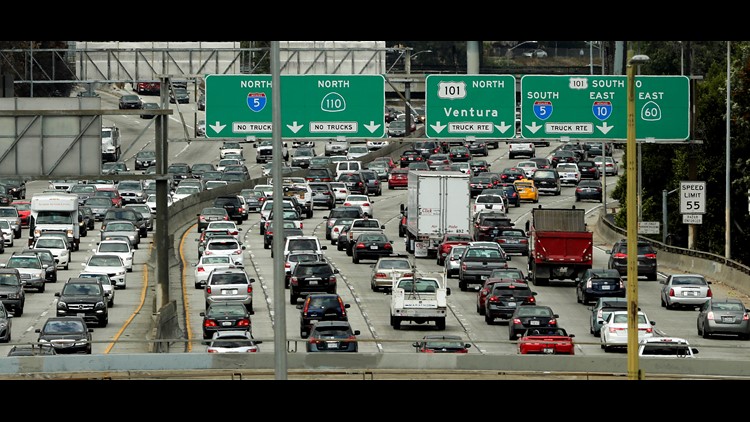 Photo by: Jae C. Hong, AP
Traffic slowly moves along the 110 Freeway during afternoon rush hour in downtown Los Angeles in May 2015.

Traffic slowly moves along the 110 Freeway during afternoon rush hour in downtown Los Angeles in May 2015.
Jae C. Hong, AP

"We're worried," said the coach at Bullard High School. "About 25% of our kids are carrying inhalers now. I find empty inhalers all the time in the weight room and on the fields. We practice from 7 to 9 p.m. during the bad months. And my son's elementary school keeps (students) inside because of air quality."

At 53, the Fresno native says exhaust from passenger cars and trucks moving farm products through California's Central Valley has changed everyday life. "I used to always see the mountains. Now it's a rare day when we see the mountains" — the Sierra Nevada about 50 miles to the east.

So when the Trump administration said on April 3 it plans to roll back Obama-era greenhouse gas and fuel emissions standards for cars and light trucks, California officials took note. What is an engineering debate in Detroit is a crucial health question in the state where one-eighth of the nation's vehicles are sold.

California has authority under the Clean Air Act that allows it to set its own emissions standards, which are tougher than national standards. Twelve other states have adopted those standards and account for a third of the U.S. auto market.

The Trump administration action holds out the prospect of a legal battle to erase California's waiver as automakers, represented by the Alliance of Automobile Manufacturers, advocate for "one national standard" — which could be read as wanting to eliminate California's rules.

Arax's players and the field littered with inhalers show why California will fight to maintain basic protections. Observers say the law is on the state's side.

"It’s a 'be careful what you wish for' scenario," said Brian Maas, president of the California New Car Dealers Association and a lawyer. "You don’t know where litigation is going to end up."

Regulatory measures are designed to cut carbon dioxide and reduce air pollution. Tougher regulation is a global trend. But some U.S. politicians say Obama-era mandates should be relaxed.

Scott Pruitt, the Environmental Protection Agency administrator, has taken up their cause.

“The Obama EPA’s determination was wrong,” Pruitt said in announcing the planned rollback. “Obama’s EPA cut the midterm evaluation process short with politically charged expediency, made assumptions about the standards that didn’t comport with reality and set the standards too high.”

In 2012, federal agencies, California and the auto industry agreed to raise average fuel economy for passenger cars to up to 54.5 miles per gallon by 2025. Because of provisions in how the government measures emissions and fuel economy, that really works out to a combined city-highway rating of about 38 mpg.

After the negotiations, no one claimed victory. Everybody compromised.

Automakers insist their push for flexibility and a single standard doesn't mean they want to back off targets. They have produced more fuel-efficient vehicles that pollute less even as pickup sales soar. The consumer shift to pickups and SUVs as gas prices have remained low, in part because of the fracking boom, has limited sales of electric vehicles and efficient gas burners.

"Nobody is saying, 'Let's pollute the air more.' The problem is the cost," said Rebecca Lindland, executive analyst for Kelley Blue Book. "How do we get consumers to buy these vehicles? It's going to get really expensive. When it comes to the fuel economy standard, I think manufacturers want relief, which isn't to say they want to go back to gas-guzzling SUVs."

However, analysts and manufacturers say, a fuel economy solution requires a collaborative style.

"We are not getting that from the top right now," said Lindland, a committee member on the 2015 National Research Council report evaluating fuel economy technologies. "We have to plan in advance because production, vehicles, power trains  — none of those decisions are flexible. They are decisive because of the nature of the investment."

California’s top air regulator is open to giving automakers flexibility to comply with vehicle greenhouse-gas emissions rules even as her $1.6-billion state agency prepares to fight the Trump administration over vehicle pollution standards.

Mary Nichols, chair of the powerful California Air Resources Board, said in an interview with the Free Press she thinks California officials, automakers and the Trump administration can agree to revise and extend the standards.

"If there are ways to eliminate things that aren’t contributing to overall environmental performance, we’re absolutely open to talking about them," Nichols said, noting that current rebates on low-emission vehicles are designed to move consumers and there's potential for other effective strategies.

Automakers say they would like to see standards tweaked or adjusted in ways that don't undermine the effectiveness of the air quality program.

While Nichols is receptive, she emphasized that California will insist on commitments at least through 2030.

Industry analysts warn that automakers must continue to improve in order to remain competitive in California, the largest domestic car market, and China, the largest car market worldwide.

"It's not unusual for California to chart its own course, which it has done for the past 40 or 50 years," said Maas, who represents California car dealers. "There’s a sense we need to do more than the federal government has seen fit to do over time. There’s a perception that our air quality issues are more challenging. Take smog in the L.A. basin or the Central Valley, for example. Those are huge issues."

Car dealers in California don't see a fight as necessary or winnable. They worry about the 40 million people who buy more than 2 million cars a year now.

"There is a way for these views to be reconciled," Maas said. "I mean, we work for car dealers. Dealers make deals every day. They're used to compromising."

He noted that automakers, the U.S. government and California agreed to one rule in 2012 and can do so again. The original group agreed to review in 2018 and commit to 2025.

Now the federal government appears poised to set standards for the rest of America apart from California.

"That's potentially not helpful," Maas said. "Then, automakers are going to have to make a choice. Will they meet our standards or abandon the market? It could affect vehicle affordability and vehicle availability. We sell one of every eight new cars in the U.S."

Despite Pruitt's rhetoric, no one involved in the industry opposes debate over regulation.

The issue isn't that Trump has suggested a fresh review of the emissions policy, but rather the tone and aggressive nature of the public statements. Automakers say the industry has evolved dramatically with new technologies that merit rebates, tax breaks and additional incentives that may move consumers toward electrification and financially assist automakers trying to meet regulation.

Top officials who represent automakers say privately they're surprised and relieved by the open-minded tone established by Nichols. They say she is a force to be reckoned with, but is reasonable.

Judges have presumed California is authorized to make its own rules unless there's a good reason to change policy. The federal government can't just deny the state's rights, said Sean Hecht, co-director of the Emmett Institute on Climate Change and the Environment at the UCLA School of Law.

"We have a history of the auto industry declaring how difficult it is to comply with regulations," he said. "Inevitably, it costs less than they say and they're capable of making changes. These standards drive innovation in the industry. When you have stricter standards, automakers find a way."

Amory Lovins of Rocky Mountain Institute, who is a member of the National Petroleum Council and the Society of Automotive Engineers, has worked closely with automakers worldwide for 27 years, and urges players to avoid litigation.

“It would be extremely disruptive for an industry with very long lead times and complex production planning. Add to that tariffs on its two main raw materials (steel and aluminum), and the threat of blowing up (the North American Free Trade Agreement), on which the finely tuned three-country supply chain depends with baroque complexity," Lovins said. "And then on top of that, guaranteeing years of acrimony and litigation which leave you not knowing what products you’ll be allowed, encouraged or rewarded to sell. That’s a recipe for disaster.”

He said simply, "California would litigate and most likely win. The law is on their side."

But the Trump administration has proven it's unafraid of filing lawsuits.

“This is an administration that seems prone to play political theater on a wide range of issues and then get struck down by the courts," Lovins said. “If you think this is about a reality show and not governing, this is what it looks like. I don’t know whether the CEOs of the automakers are having serious second thoughts, but I think they must be worried, and some do indeed want Mr. Pruitt to chill out.”

He noted that global competitiveness is at stake. "Any market share that we vacate by breaking down arrangements that had been working quite well will be cheerfully taken by foreign competitors.”

A transplant from Milwaukee to the San Joaquin Valley, he arrived with no family history of respiratory issues. Now, he is making arrangements to move away from his children and grandchildren. His wife, Judith Eymann-Taylor, 74, a retired preschool teacher, can sing in the church choir — and avoid coughing — only as air pollution allows.

"We both use multiple inhalers," said Taylor, 67, of Fresno. "Neither of us can breathe without assistance in the winter. We got to the point where the doctor said move and move now."

He has seen central California emergency rooms filled with children and adults struggling to get oxygen into their lungs when polluted air triggers asthma. "I can't even go out for a walk here unless it rains. If you asked me how air pollution is affecting my life, I'd say I'm eager to be able to breathe."

Now he is looking for a home in southwest Utah. He said, "This is not the way I envisioned my retirement."