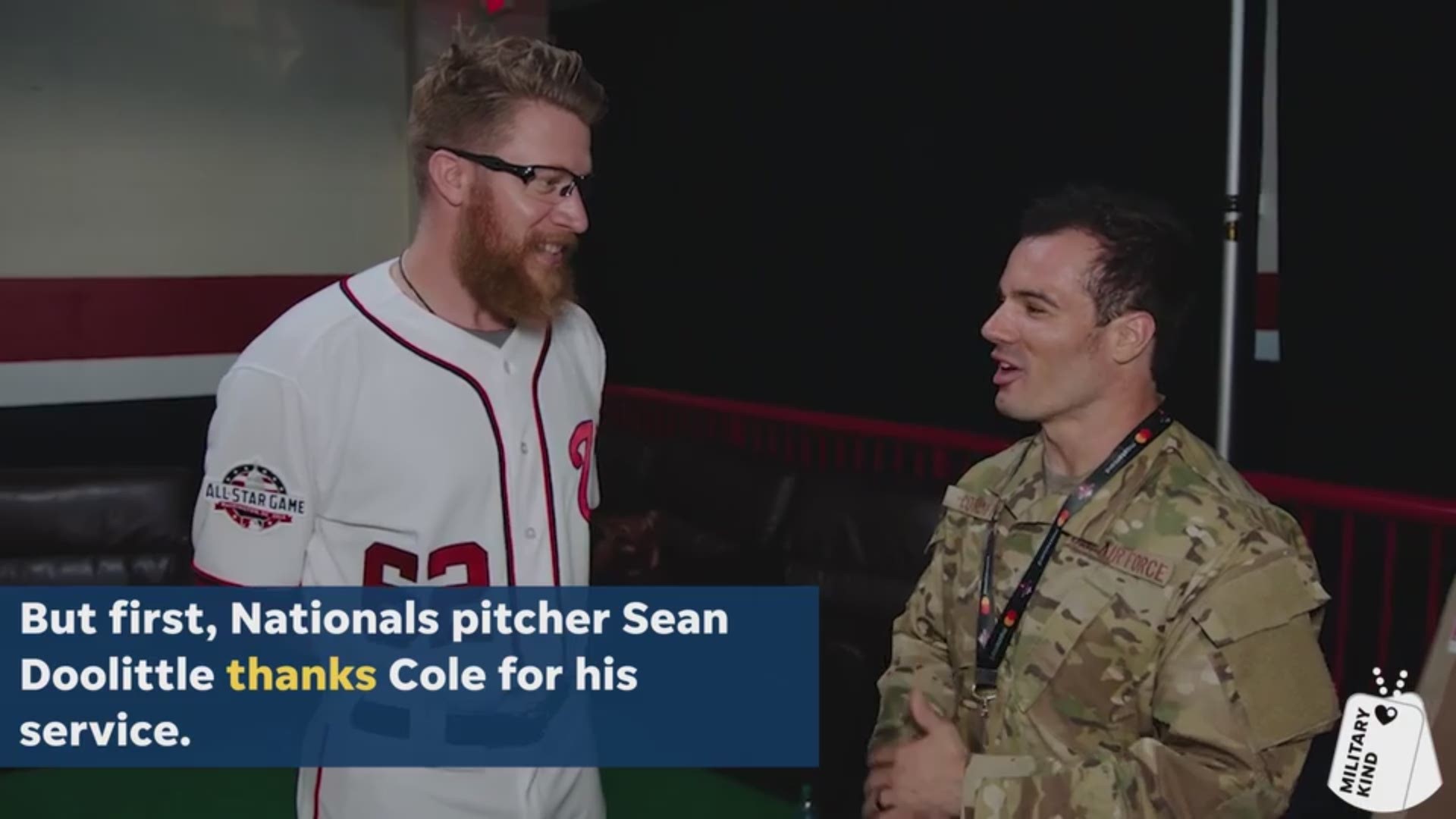 Credit: courtesy MLB
Air Force Special Tactics operator Cole Condiff's family was ready to see his face on the jumbotron. Instead, they got something much better.

His family thought Air Force Special Tactics operator Cole Condiff was going to miss his daughter's third birthday. But the Staff Sgt. had a huge surprise in store for them. The surprise would take several employees of the Washington Nationals and Major League Baseball to help pull off. Cole had just returned from his second deployment, where this time he had been away from home for nearly six months. He's a part of the only Special Tactics wing in the Air Force, based out of Florida, and deployed as part of Operation Enduring Freedom. Cole arrived back in the United States a couple weeks early so he could surprise his family at the MLB All-Star game. His wife, daughter and sister had tickets to the game as part of a Geico program called Seats for Service, in which military families get tickets to baseball games to honor their sacrifices. They had no idea Cole was also at the game, talking to Nationals pitcher Sean Doolittle before the game started. Cole told Sean as the moment grew closer, he was beginning to get more and more nervous.

"How's it going down, do you know?" Sean asked.

"I know a little bit," Cole replied. "They're bringing her out there. They're going to show her a video that I did earlier today, where I had a beard still, so it's going to be really weird."

As Cole's family stood in the stadium in an area where everyone in attendance could see them, Cole waited in an executive suite behind them for the perfect moment to walk out and show them he's home.

The video tribute to Cole's family began to play.

"Hey I'm Staff Sgt. Condiff, Air Force combat controller, out here supporting Operation Enduring Freedom," Cole said in the video as his pregnant wife Rachel began to cry. "I'd just like to take this opportunity to say hello to my wife, my daughter. Rachel, I'm excited to see you in a couple weeks. Charley, happy birthday. Sorry that I won't be there to see your third birthday. But I'd also like to thank Geico and Major League Baseball for giving me this opportunity to say hello to my family."

As the video finished, Cole walked toward his family from behind. His wife Rachel turned around in time to give him a big hug. The crowd began to cheer. Cole hugged his daughter and his sister too.

Watch the beautiful moment unfold in the video player above.

Cole made it home just four days before his daughter's third birthday.

"Thank you to the Condiff family for your commitment to our country," the announcer said as the entire crowd watched the family embrace.