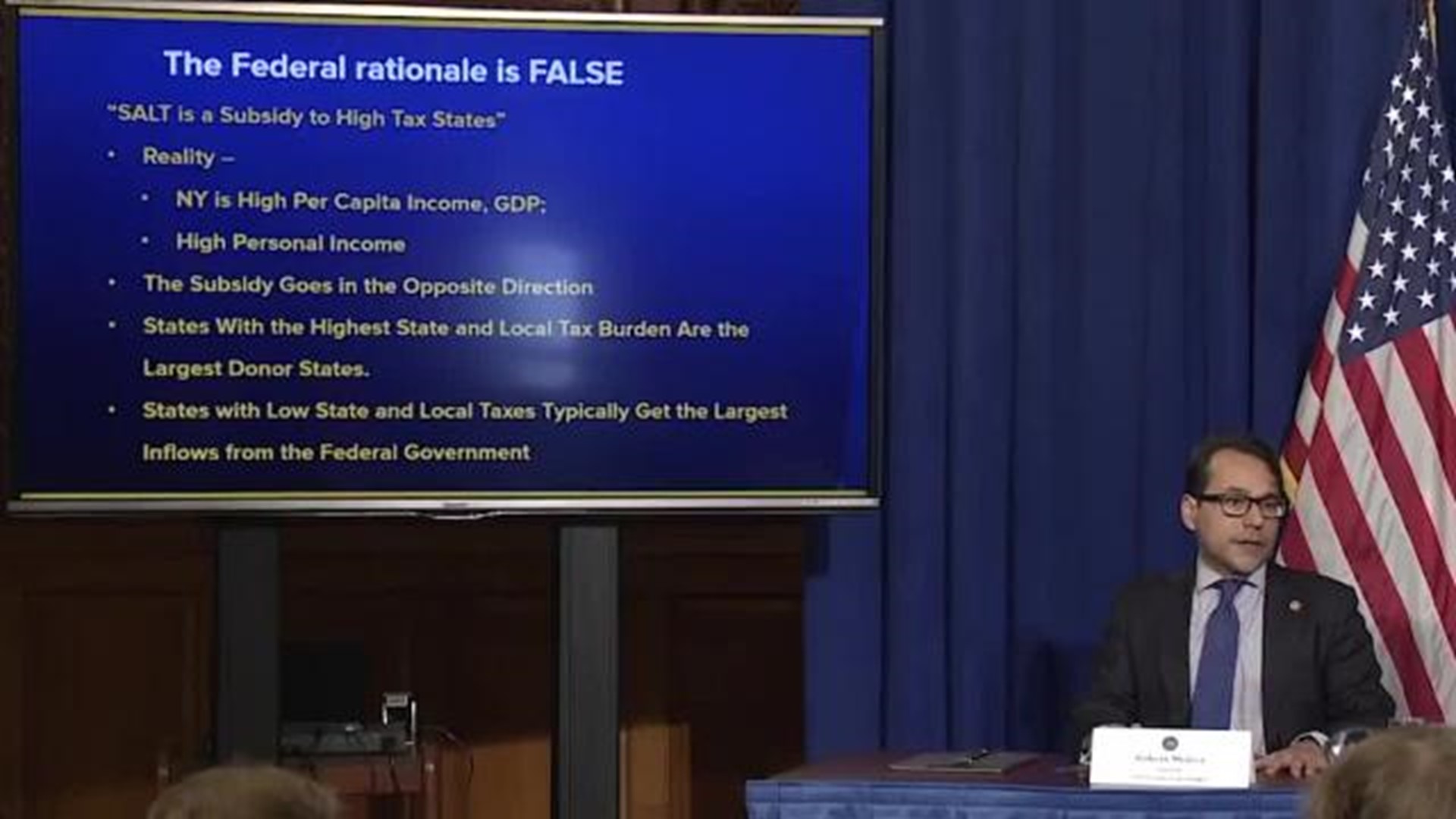 ALBANY, N.Y. — New York is poised as early as this week to approve a new payroll tax and a charitable contribution program as a way to usurp the federal tax code approved in December that limits state and local tax deductions.

The law, aimed mainly at keeping wealthy New Yorkers from moving, is one that several high-tax states, including New Jersey, Connecticut and California, are considering to fight the tax plan approved by Congress and signed by President Trump.

In New York, Gov. Andrew Cuomo has vowed to try to enact new laws that would blunt the impact of a federal tax provision that limits state and local tax deductions to $10,000 a year.

The cap is a big deal in high-wealth, high-tax states because people who itemize their taxes will not be able to deduct their full state and local taxes, called SALT, on their income taxes each year — including property-tax deductions.

More: GOP divided on how to use tax cuts to match Dems' anti-Trump enthusiasm in 2018 midterms

Cuomo, a potential presidential candidate in 2020, charged that Trump and the GOP-controlled Congress have purposefully targeted blue states with the tax bill.

"That is either one heck of a coincidence or was a purposeful targeting of states with a political agenda."

In January, Connecticut, New Jersey and New York said they would sue the federal government over the law.

Credit: Amy Newman/NorthJersey.com
Governor Phil Murphy gives a thumbs up to the crowd following a rally at Union City High School to officially launch Sen. Robert Menendez's reelection bid to a third term in the United States Senate. The rally was held in Menendez's hometown of Union City on Wednesday, March 28, 2018.

Officials in at least a handful of states have been pushing plans to circumvent the $10,000 cap on state and local tax deductions, often by trying to create a charitable fund.

That includes California, where the state Senate voted in January to allow residents to pay into the California Excellence Fund instead of paying property taxes.

Contributions to the fund would be eligible for an 85 percent tax credit.

The California bill sits in the state Assembly, where it hasn’t yet received a vote.

New Jersey’s Senate approved a similar bill in February, though the charitable funds would be set up by municipalities and schools instead of the state.

Like the California bill, the New Jersey bill has not yet received an Assembly vote.

And in Connecticut, Gov. Dannel Malloy’s budget proposal called for allowing municipalities to set up local charitable funds with donations offset by a property-tax credit.

“The actions we are proposing aim to protect Connecticut residents and businesses, who are specifically targeted by this (Republican tax) law,” Malloy said in February.

The state Legislature in New York is expected to approve a two-pronged plan by Cuomo as part of its state budget for the fiscal year that starts Sunday.

One piece would allow companies to voluntarily opt into a payroll tax system where employers would be subjected to a 5 percent tax on all annual payroll expenses in excess of $40,000 per employee.

The employer would be reimbursed through a tax credit by the state, while employees would see less take-home pay — but get reimbursed on their income taxes.

Overall, the proposal would let employers reduce employees' federal taxes to make up for the cap on state and local tax deductions.

The process is complex, and likely only few companies would participate — particularly those with few employees and high salaries, estimated E.J. McMahon, who heads the Empire Center, a fiscally conservative think tank in Albany.

"The corporate tax thing is not a big deal and has very limited appeal," McMahon said.

To that point, Senate Republicans in New York were initially opposed to Cuomo's plan, but appear to have acquiesced, suggesting it would be voluntary and likely limited to companies in certain tax circumstances.

Employers could opt in by Oct. 1 to participate, under Cuomo's initial proposal.

The concern is that wealthy residents of an expensive state, such as New York, will simply leave for lower-tax states, lawmakers said.

"If we need to try and do something to keep people in New York here, I’m all for it," said Sen. Terrence Murphy, R-Yorktown, Westchester County.

Secondly, New York is expected to establish two new charitable contribution programs: one for health care and one for education.

Residents can pay into the funds as a way to get the tax break if they itemize their taxes and exceed the $10,000 deduction limit.

McMahon said the charitable deduction piece could impact more New Yorkers, especially those in New York City and its suburbs who pay among the highest property taxes in the nation.

"The charitable thing would be a fairly big deal, especially for high-income people, but not just for them: for anybody itemizing who is a homeowner, especially downstate," he said.

Under Cuomo's plan, schools and municipalities would have to set up the charitable contribution programs and accept the money from taxpayers — who would then get a tax credit.

But local governments are concerned about having to administer a new tax program. 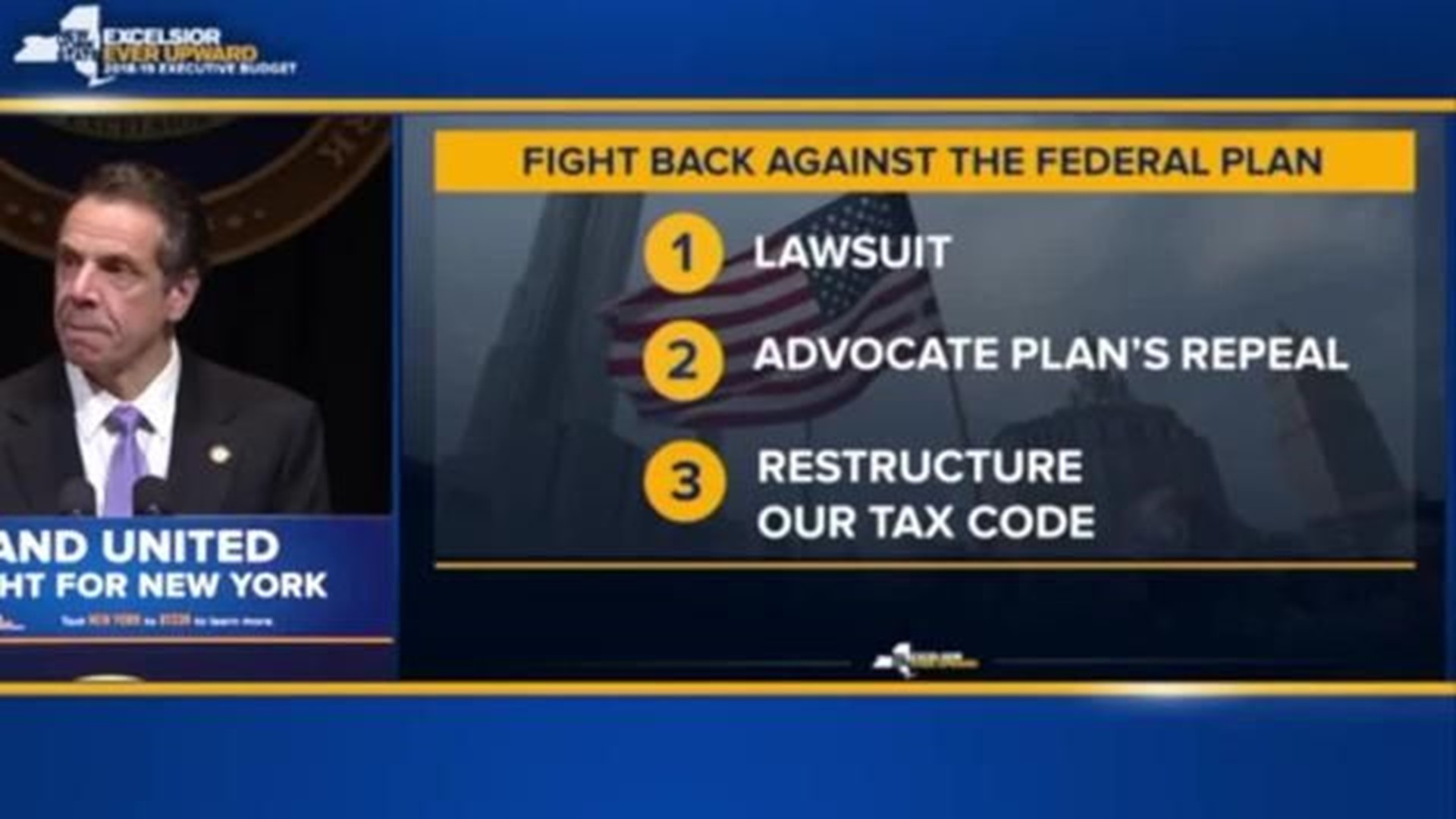 One of the questions is whether the charitable contribution program would be allowed by the IRS.

Some experts warn that the federal government is likely to reject the states' efforts.

IRS policy has historically frowned on charitable contributions that benefit the taxpayer, not an organization, wrote Andrew Sidamon-Eristoff, a former state treasurer in New Jersey and tax commissioner in New York.

"If you think about it, this general rule makes sense: if you're getting something of value in return for your donation, it's not really a donation, right?" he wrote.

"Now consider our charity workaround idea. The simple and inescapable truth is that no one would be pushing for this scheme but for the objective of securing a restored tax deduction."

The issue is unresolved, so much so that Rep. John Faso, R-Kinderhook, Columbia County, wrote a letter to the IRS asking it to weigh in now — while states are considering the idea.

"Would such payments or contributions meet the test for a charitable deduction since presumably the taxpayer is receiving benefits from the governmental units and school districts for the 'contributions' donated?" Faso asked Feb. 28.

The IRS has yet to weigh in, but Cuomo blasted Faso's questions, accusing the Republican legislator of trying to make a political case to the IRS before any state law is enacted.

"Your hyper-partisan activities are to the detriment of your own constituents," Cuomo wrote March 15.

"Seeking to engage the IRS in preemptory opinions smacks of politicization of the Internal Revenue Service."

Faso responded in a letter to Cuomo that the state should know in advance whether the IRS will allow the charitable contribution program to proceed.

Then he took a swipe at Cuomo, comparing him to his late father, the three-term Gov. Mario Cuomo.

"Although I had many disagreements with him, Mario Cuomo was at his core, a man of principle and honor," Faso wrote.