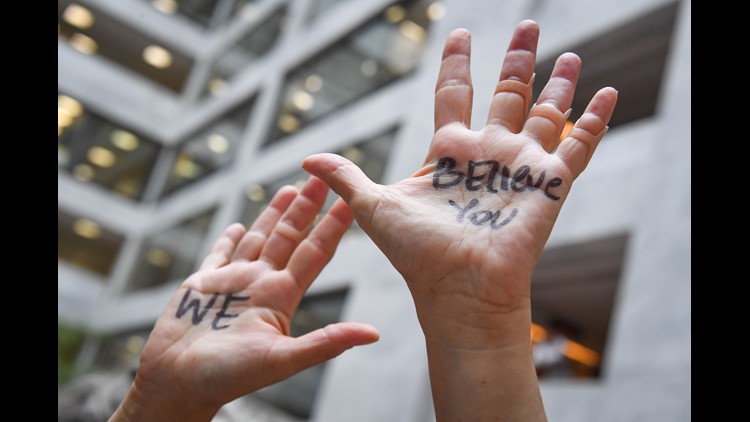 Photo by: Jack Gruber, USA TODAY
Protesters in the Hart Senate Office Building as Christine Blasey Ford testifies in front of the Senate Committee on the Judiciary on Sept. 27, 2018 in Washington.

A history of sexual assault or workplace sexual harassment can have a major effect on the mental and physical health of a middle-aged woman, a new study suggests.

Victims of sexual assault suffer high rates of depression, anxiety and sleeplessness; victims of harassment have elevated rates of high blood pressure and sleep loss, according to the study published Wednesday in JAMA Internal Medicine.

The study, which will be presented at a medical meeting this week, comes as many midlife women across the USA are sharing stories of abuse and harassment, sometimes decades old.

Christine Blasey Ford, 51, a California psychology professor, said at a Senate hearing last week that she was sexually assaulted by Brett Kavanaugh, a nominee for the Supreme Court, when they were teens – and still suffered from anxiety, post-traumatic stress and phobias as a result. Kavanaugh denied the assault allegation.

The study is not the first or largest to link sexual assault and harassment with mental and physical health problems. But it may carry extra weight because the women in the study were directly examined by researchers and underwent formal mental health assessments. Some previous studies were based on surveys.

The researchers did not know their study would come out when assault and harassment are in the headlines, but the timing “just underscores how important these issues are and that we do need a national dialogue about prevention and intervention,” said study author Rebecca Thurston, a professor of psychiatry at the University of Pittsburgh.

More: The odds are against women when reporting sexual assault

Here’s how these women differed from the women in the study who reported no harassment or assault:

• The women who said they were harassed were two times more likely to have untreated high blood pressure.

• Both categories of women were two times more likely to have trouble sleeping.

The study has other limitations. It did not include smokers, who have more mental and physical health problems, or women taking certain medications for depression and anxiety. If it had, numbers reporting assault and harassment and the associated health problems would probably have been larger, Thurston said.

The findings make a compelling case that health care providers who see midlife women should ask them about assault, harassment and other traumas, especially when women have health problems such as those found in the study, said JoAnn Pinkerton, executive director of the North American Menopause Society. The society is hosting the meeting where Thurston will speak Friday.

“These are often events from long ago, but they are clinically important right now,” said Pinkerton, a professor of obstetrics and gynecology at the University of Virginia Health System.

Ideally, she said, doctors will be prepared to refer traumatized women to mental health professionals and others who can help.

Thurston said, "What we need now is a big cultural shift in terms of our receptivity to women coming out and reporting these issues and taking women seriously.”