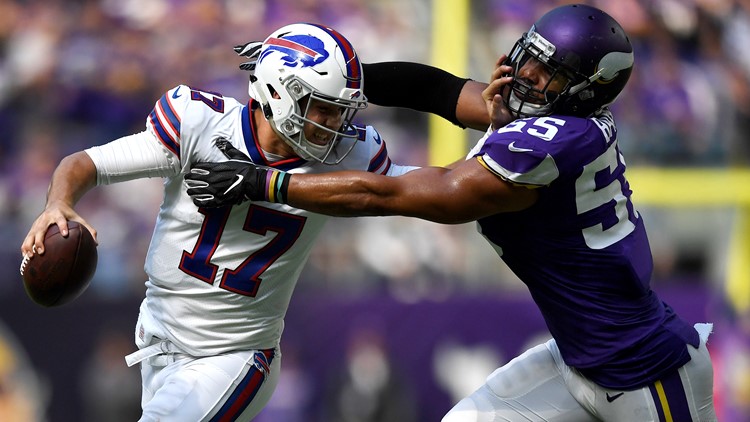 Photo by: Hannah Foslien
Josh Allen of the Buffalo Bills runs with the ball and stiff arms defender Anthony Barr of the Minnesota Vikings in the first half of the game at U.S. Bank Stadium on September 23, 2018 in Minneapolis, Minnesota. (Hannah Foslien/Getty Images)

32 things we learned from Week 3 of the NFL season

1. Just when you think you've got the NFL figured out, the familiar phrase "any given Sunday" — not a bad movie, either — surfaces. Exhibit A: Bills 27, Vikings 6 ... in Minnesota ... and with LeSean McCoy in street clothes ... and after Buffalo scored 23 points in its first two games ... combined. If you predicted that outcome, then you're lying.

2. At least the Vikings running backs should be fresh for Thursday's game against the Rams. Dalvin Cook (hamstring) was inactive — he has vowed to play in L.A. — and QB Kirk Cousins (three turnovers) handed off just four times while hoisting 55 throws.

3. Exhibit B: If you had the Bears atop the NFC North after three weeks, then you're (almost surely) lying.

4. Exhibit C: The Jaguars, who rose to the top of USA TODAY's power rankings after their Week 2 thumping of the Patriots, lost to the undermanned Titans 9-6, preventing the NFL's Florida teams from bolting to their first collective 9-0 start (the 2-0 Buccaneers host the Steelers on Monday).

5. QB Blaine Gabbert, who threw three passes before a concussion prematurely ended his day, got the win for Tennessee. He is 2-0 for the 2-1 Titans.

8.The Seahawks averted their first 0-3 start under Pete Carroll by beating the Cowboys. It helped Seattle that Earl Thomas deigned to show up for work. The unhappy safety finished with seven tackles and two INTs of Dak Prescott, just the kind of showcase one would want if secretly hoping Dallas will rekindle its pursuit of a trade.

10. The Chargers' special teams continue to be anything but. On Sunday, they had a punt blocked for a TD and missed another extra point. Wouldn't be shocking if their season is short-circuited at some point by their inability to clean up their kicking games.

11. One day Clay Matthews will retire with a résumé demanding strong Hall of Fame consideration. But right now his legacy may include what seems like the inevitable "Clay Matthews Rule" since the NFL clearly needs to rethink flags the Packers star has been hit with the last two weeks for perfectly legitimate hits on Kirk Cousins and Alex Smith. Per ESPN Stats & Info, Matthews has three roughing the passer penalties this year, and four for the balance of his 10-year career.

12. Start the year 3-0, and you've got a 73.9% chance to make the playoffs. Salud to the Chiefs, Dolphins, Rams ... and maybe Bucs, pending Monday's result. Conversely, start 0-3, and your postseason dreams are basically dashed with a probability of 2.2%. Good night to the Raiders, Texans and Cardinals.

13. New Orleans' Drew Brees and Atlanta's Matt Ryan squared off for the 20th time Sunday, the most head-to-head matchups between two quarterbacks in the Super Bowl era. And it may have been their best battle of all — it was definitively the highest scoring — as Brees' 1-yard TD run in overtime gave the Saints a 43-37 victory.

15. Ryan, who hadn't thrown for three TDs in a game since Kyle Shanhan was his offense coordinator during Atlanta's 2016 Super Bowl run, hit for a career-high five on Sunday. He needed six.

16. Saints WR Michael Thomas snagged 10 more passes Sunday, giving him an NFL-high 38, which is also the most ever through a season's first three weeks.

17. Patrick Mahomes' league-leading TD pass count is up to 13, another NFL record through three games. But even though his early pace puts Mahomes on track for 69, he lamented to USA TODAY's Mike Jones on Sunday afternoon that he left two more on the table in the undefeated Chiefs' 38-27 victory over San Francisco.

18. Kansas City became the third team to score at least 38 points in each of its first three games. The 2007 Patriots were the last to turn the trick.

19. The knee injury suffered by Jimmy Garoppolo overshadowed the return of San Francisco LB Reuben Foster, who was suspended the first two games for violating the league's personal conduct policy. Foster started on the weak side and finished Sunday with seven tackles.

20. A Kansas City defense that began the weekend ranked last in the NFL surrendered 27 points and 406 yards to the Niners. Considering those are high-water marks for the Chiefs D, you have some idea how much it's struggled.

23. Stat of the week: The Ravens have scored TDs on all 12 of their red-zone trips this season.

24. Adam Vinatieri's next field goal will be his 566th, giving him the NFL career record he currently shares with Hall of Famer Morten Andersen.

25. To be expected, QB Carson Wentz was not in pre-injury form Sunday. He turned the ball over twice, ran just three times on his surgically repaired knee, and took five sacks in his 2018 debut. But he helped the Eagles get back on the winning track.

26. More concerning, QB Andrew Luck isn't in pre-injury form, either. His 25 completions covered just 164 yards (his average of 6.6 yards per completion is roughly half his career rate). And when the Colts needed the ball to go deep on a final desperation play from their own 46-yard line, they pulled Luck and his rebuilt shoulder to let Jacoby Brissett loft a Hail Mary that once would've been comfortably within Luck's range.

27. Ryan Tannehill, not Luck, is staking an early claim as comeback player of the year. He threw three TD passes Sunday for the first time since Dec. 11, 2016, helping first-place Miami (3-0) remain one of the season's early surprises.

29. Arizona's Josh Rosen became the final first-round quarterback of the 2018 draft to make his regular-season debut. He replaced Sam Bradford, who had three turnovers, and threw an interception himself among seven throws. A Rosen pick-six was waved off because Mack was offsides ... allegedly.

30. Apparently the Panthers are willing to consider a philosophical shift as it pertains to the deployment of RB Christian McCaffrey. He carried 28 times Sunday, 13 more than in any of his 18 previous NFL games. McCaffrey's 184 rushing yards were 82 more than his next-best game. Equally unusual, he caught just two balls after entering Week 3 with 20 receptions, the second-highest figure in the league after two games.

31. With a decent kicking game in the first two weeks, the Browns might be 3-0 heading into Week 4. As it stands, they're 1-1-1 after breaking a 635-day winless streak Thursday and could be a legitimate playoff threat if Baker Mayfield continues to be a stabilizing offensive force.