Reports: Hundreds of troops assigned to Capitol moved to parking garage with 1 bathroom

Lawmakers voiced outrage when they heard troops assigned to protect President Biden and Congress were moved. Some offered up their offices instead. 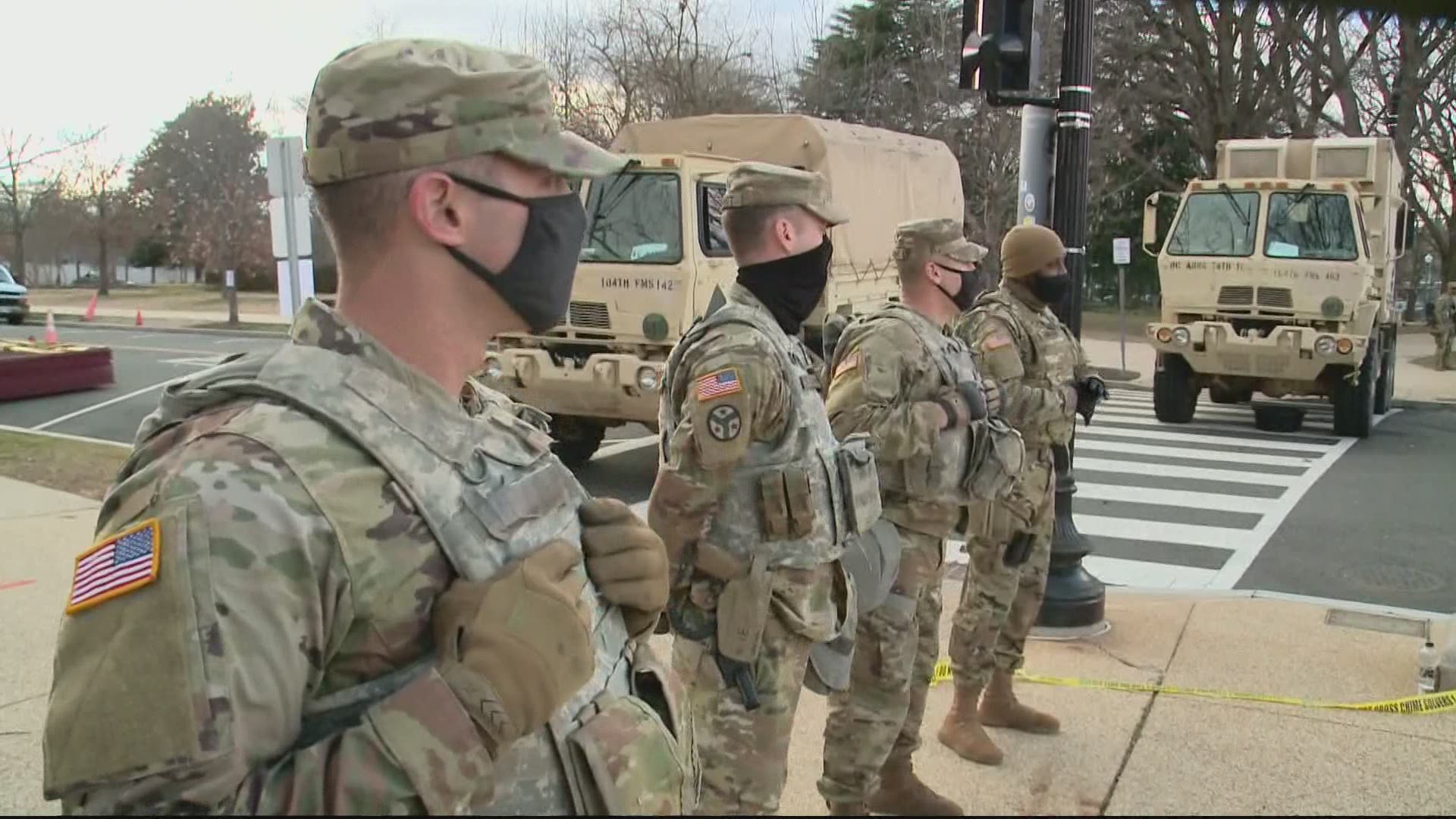 WASHINGTON — A day after President Joe Biden’s inauguration went off with only a handful of minor arrests and incidents, more than 15,000 National Guard members are preparing to leave Washington, D.C. and head home.

But The Washington Post and Politico reported Thursday that hundreds of those remaining Guard troops were forced out of areas of the Capitol they had been using for rest breaks and were relocated to a nearby garage.

“I’ve never in my entire career felt like I’ve been booted onto the curb and told, ‘Figure it out on your own,’" one of the soldiers, who served in Iraq and Afghanistan, told The Washington Post.

An unidentified Guardsman told Politico troops -- as many as 5,000 -- had access to one bathroom with two stalls, no internet reception and one electrical outlet. Temperatures fell into the low 40's Thursday night.

Photos of the troops in the garage drew outrage from lawmakers.

"This is outrageous, shameful, and incredibly disrespectful to the men and women keeping the U.S. Capitol safe and secure," tweeted Sen. Kyrsten Sinema, D-Ariz. "We need it fixed and we need answers on how it happened."

This is outrageous, shameful, and incredibly disrespectful to the men and women keeping the U.S. Capitol safe and secure. We need it fixed and we need answers on how it happened. https://t.co/jDENVwcWQy

She also offered up her office as space for the troops to crash, as did Rep. Alexandria Ocasio-Cortez, D-N.Y.

Yeah this is not okay.

My office is free this week to any service members who’d like to use it for a break or take nap on the couch. We’ll stock up on snacks for you all too.

(We’re in the middle of moving offices and it’s a bit messy so don’t judge, but make yourself at home!) https://t.co/JyEvC4kg6o

"We’ll get to the bottom of this and get it fixed. Congress is in session, but buildings are still closed to public, so there’s plenty of room for troops to take a break in them," tweeted Sen. Tom Cotton, R-Ark.

We’ll get to the bottom of this and get it fixed. Congress is in session, but buildings are still closed to public, so there’s plenty of room for troops to take a break in them. https://t.co/H9CfOtJAW9

Sen. Tammy Duckworth, an Iraq War veteran, tweeted: “Just made a number of calls and have been informed Capitol Police have apologized to the Guardsmen and they will be allowed back into the complex tonight. I’ll keep checking to make sure they are.”

Capitol Police released a statement that the department asked for troops' shifts to be reduced from 12 hours to eight to allow for more rest away from the Capitol complex, according to Politico. But it did not state why the guardsmen were sent to parking garages.

The National Guard Bureau said Thursday that of the nearly 26,000 Guard troops deployed to D.C. for the inaugural, just 10,600 remain on duty. The bureau said the Guard is helping states with coordination and the logistics so that troops can get home.

Thousands of Guard troops from all across the country poured into D.C. by the planeload and busload late last week, in response to escalating security threats and fears of more rioting. Military aircraft crowded the runways at Joint Base Andrews in Maryland, carrying Guard members into the region in the wake of the deadly Jan. 6 insurrection at the U.S. Capitol.

Guard forces were scattered around the city, helping to secure the Capitol, monuments, Metro entrances and the perimeter of central D.C., which was largely locked down for several days leading up to Wednesday's inaugural ceremony.

The U.S. Secret Service announced that the special security event for the inauguration officially ended at noon Thursday.

The Guard said that it may take several days to make all the arrangements to return the 15,000 home, but it should be complete in five to 10 days. Guard members will have to turn in equipment, make travel plans and go through COVID-19 screening.

Some local law enforcement agencies have asked for continued assistance from the Guard, so roughly 7,000 troops are expected to stay in the region through the end of the month.