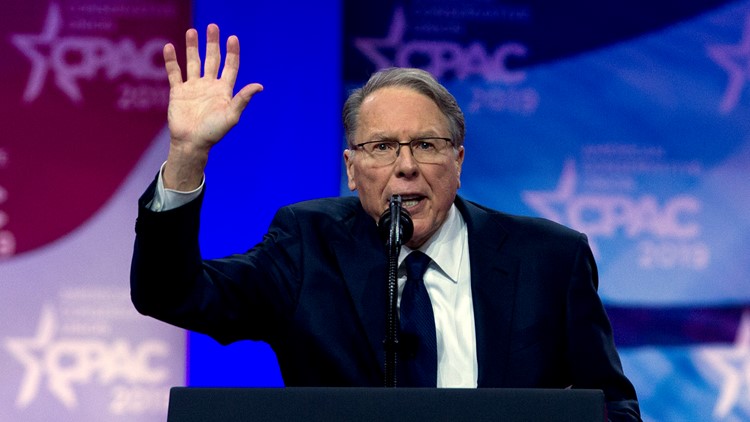 NRA board gathers for meeting at crucial time for gun debate

WASHINGTON — With the country at a critical juncture in the gun debate, a normally routine meeting of the National Rifle Association has taken on greater significance as its board of directors gathers near the nation's capital this week.

President Donald Trump and Republicans in Congress are weighing stricter gun measures in the aftermath of mass killings in Texas and Ohio. Democratic presidential candidates in their debate Thursday were relentless in their pursuit of harsh gun restrictions, punctuated by former El Paso Rep. Beto O'Rourke's vow that, "hell yes, we're gonna take your AR-15, your AK-47."

The "AR-15 like" rifle pictured above was used by the gunman in the deadly mass shooting in Dayton.
Dayton PD

Corporate America also has been increasingly pushing back against the NRA. The gun organization's legal battles and internal strife have deepened since the last time the NRA board met at a tumultuous April gathering. It's even been labeled a domestic terrorist organization by the San Francisco Board of Supervisors, a move that prompted a lawsuit from the NRA.

Even the location of the fall meeting, an annual affair that is usually under-the-radar, ended up being controversial. The NRA originally planned to hold the gathering, which is not open to the public or to most rank-and-file NRA members, in Alaska. That far-flung location drew criticism among some NRA members for being an unnecessary expense and a way to avoid scrutiny.

Then just weeks ago, at a cost of about $100,000, it was switched to metro Washington as the NRA said it was critical to be close to Congress where gun restrictions are gaining some momentum.

Marion Hammer, a former NRA president and one of its most prominent board members, acknowledged that the metro Washington location will make it easier to gain access to leaders during this pivotal time in the gun debate.

"If they are in Alaska, it would make it impossible for NRA's officers and senior staff to be engaged in the fight for your rights in the nation's capital," she wrote in a post on an NRA website.

The meeting began on Wednesday but the board won't formally gather until Saturday. It's not clear what action, if any, the board could take.

At its annual meeting this past spring, former board president Oliver North — and several vocal NRA members — had sought a review of the NRA's finances and operations. But North stepped down from his role as president and, in recent weeks, a handful of the board's 76 members have resigned after publicly calling for greater scrutiny of its operations.

NRA members have been especially critical of CEO Wayne LaPierre's spending habits as he racked up hundreds of thousands of dollars in expenses for clothing and travel. The organization has also been accused of straying too far from its original mission and taking radical political stances, prompting the NRA to eliminate its controversial TV network.

A convention goer passes the NRA desk at the 2015 NRA Annual Convention in Nashville, Tennessee on April 10, 2015. The annual NRA meeting and exhibit, expected to draw over 70,000 people, runs till April 12.
KAREN BLEIER/AFP/Getty Images

Top NRA donor David Dell'Aquila filed a lawsuit this summer against the NRA claiming it has misused donations. Dell'Aquila has donated about $100,000 to the NRA and pledged the bulk of his estate worth several million dollars. He also has created a website that calls for wholesale changes in NRA leadership, including the ouster of LaPierre.

In addition to the internal divisions, the NRA has had to contend with growing backlash from corporate and Democratic leaders after the killings in El Paso, Dayton and Odessa.

Just as the NRA meetings were to begin, top executives at nearly 150 U.S.-based companies sent a letter to members of the U.S. Senate urging an expansion of the nation's background check system and "red flag" laws.

"Doing nothing about America's gun violence crisis is simply unacceptable and it is time to stand with the American public on gun safety," they wrote. "Gun violence in America is not inevitable; it's preventable. There are steps Congress can, and must, take to prevent and reduce gun violence. We need our lawmakers to support commonsense gun laws that could prevent tragedies like these."

The Senate returned from recess this week and some are pushing to require background checks for private gun sales. Several key senators made a fresh pitch to Trump, a longtime NRA supporter, to help break the gridlock over gun-control. Trump has flip-flopped on guns, first suggesting he'd be open to background checks legislation or other measures to try to stem gun violence, only to backtrack after speaking with the NRA and others in the gun lobby.

Rob Pincus, a longtime NRA member and firearms instructor who is among the leaders of Save the Second, a group calling for LaPierre's resignation, traveled to attend the meetings but told The Associated Press that he was kicked out as it went into executive session. He is part of a growing group of ardent gun supporters who are critical of the NRA's operations and believes the gun lobby has been squandering member donations.

"If there is a bright side to this for the gun community, it's realizing that there is no easy button," he said recently. "You can't just send your $50 to one organization and assume that they're handling it well for you, and people are having to take a little bit more accountability and a little bit more action on their own."