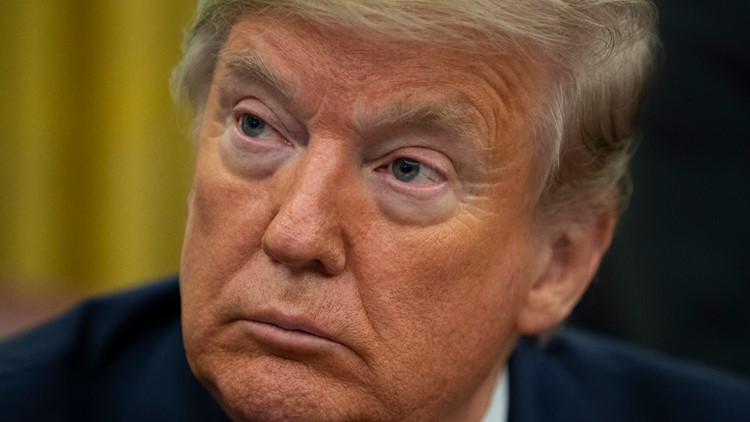 Photo by: AP
President Donald Trump listens during an event to sign an executive order establishing the Task Force on Missing and Murdered American Indians and Alaska Natives, in the Oval Office of the White House, Tuesday, Nov. 26, 2019, in Washington. (AP Photo/ Evan Vucci)

WASHINGTON — The House Judiciary Committee on Wednesday began debating the two articles of impeachment against President Donald Trump -- one for abuse of power and the other for obstruction of Congress. It sets up a potential impeachment vote before Christmas, and a Senate trial in January.

The committee's debate began Wednesday night and will continue Thursday morning. No date has been set for a committee vote, but if the articles are approved, it could lead to a full House vote next week.

If either article is approved, Trump would join Andrew Johnson and Bill Clinton as the only presidents to be impeached. The process would then move to the Senate for a trial that likely would end without Trump's removal from office.

Democrats announced the articles Tuesday, declaring Trump “betrayed the nation” with his actions toward Ukraine and obstruction of Congress' investigation.

RELATED: VERIFY: What articles of impeachment mean and what comes next

In the abuse of power article, Democrats say Trump "solicited the interference" of Ukraine in the 2020 election by asking its government to publicly announce an investigation of an opponent to benefit Trump's re-election.

In the obstruction article, Democrats say Trump "directed the unprecedented, categorical and indiscriminate defiance of subpoenas issued by the House of Representatives pursuant to its 'sole Power of Impeachment.'"

Trump insists he has done nothing wrong and says impeaching a president with a record like his would be “sheer Political Madness!” His allies in Congress have used similar language, accusing Democrats of marching toward impeachment because they don't like Trump.

There are signs not all Democrats in the House are on board with impeachment. Politico reports some Democrats suggested a formal censure of Trump instead, arguing it could bring some Republicans to their side and would eliminate what could be a lengthy Senate trial that may hurt them in the 2020 election. Politico cited "multiple lawmakers familiar with the conversations."

Rep. Justin Amash from Michigan, a Trump critic who left the Republican party earlier this year and became an independent, told CNN last week he was ready to vote for impeachment. But he added he would not commit until he read the language of the articles.

Shortly after the articles were revealed Tuesday, Democrats announced that the House had passed the United States-Mexico-Canada (USMCA) trade agreement. Trump, who had sought passage of his signature trade deal for months, had previously blamed the impeachment inquiry for the reason it hadn't been passed.

With the bill now passed in the House, Trump changed his attack at a rally in Pennsylvania, claiming without evidence that the only reason USMCA was passed is because Democrats were "embarrassed" by impeachment and wanted to downplay it.

But also on Tuesday, Senate Majority Leader Mitch McConnell said the Senate likely would not take up the USMCA until after the trial, according to USA TODAY. A spokesperson for House Speaker Nancy Pelosi tweeted that the delay was "total nonsense" and noted that the House and Senate passed three separate trade bills in one day in 2011.