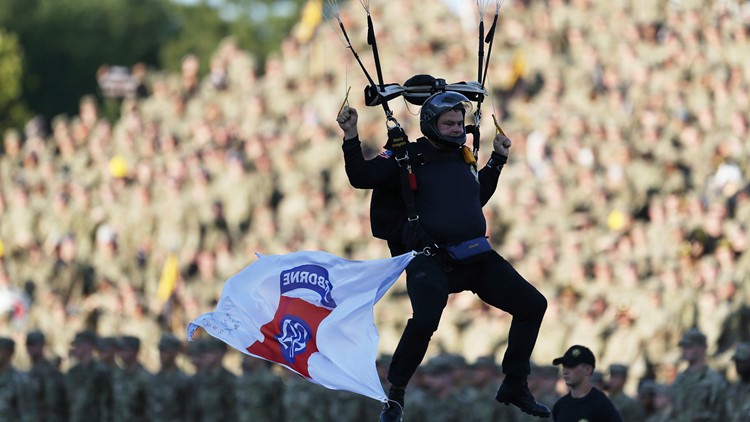 Photo by: AP
Paratrooper lands on the football field during the opening ceremonies as the Army Black Knights prepare to take on the Rice Owls during an NCAA football game on Friday, August 30, 2019, in West Point, N.Y. (AP Photo/Vera Nieuwenhuis)

WASHINGTON — An Army football team is now changing its motto after discovering that it has been connected to one of the largest and most violent white supremacist prison gangs in the country, according to the Anti-Defamation League.

The Black Knights, which is the U.S. Military Academy at West Point's football team, removed the letters "G.F.B.D." from their flag and merchandise after it was pointed out that the letters, which stand for "God Forgives, Brothers Don't", is linked to white supremacist extremist groups.

The Anti-Defamation League says that "God Forgives, Brothers Don't" is one of the most popular sayings used by the Aryan Brotherhood of Texas.

A West Point spokesperson told NBC News the program was at first unaware of the acronym's origin, saying they believed the motto was used to "emphasize teamwork, loyalty, and toughness." The spokesman said, "the academy discontinued using it upon notification of its tie to hate groups."

Lt. Gen. Darryl A. Williams, the military academy's superintendent, said this incident has been "embarrassing" and that the military's use of the slogan was "in no way related to a radical hate group or any similar group."

The symbolism of the skull-and-crossbones and motto has been used by the Army Black Knights since the mid-1990s, with the acronym "G.F.B.D." (God Forgives, Brothers Don't), written on the skull's lips.