Bill Lewis, 93, is a rarity in his community. A rarity that, unfortunately, serves as a reminder of the harsh reality that the Greatest Generation is disappearing. 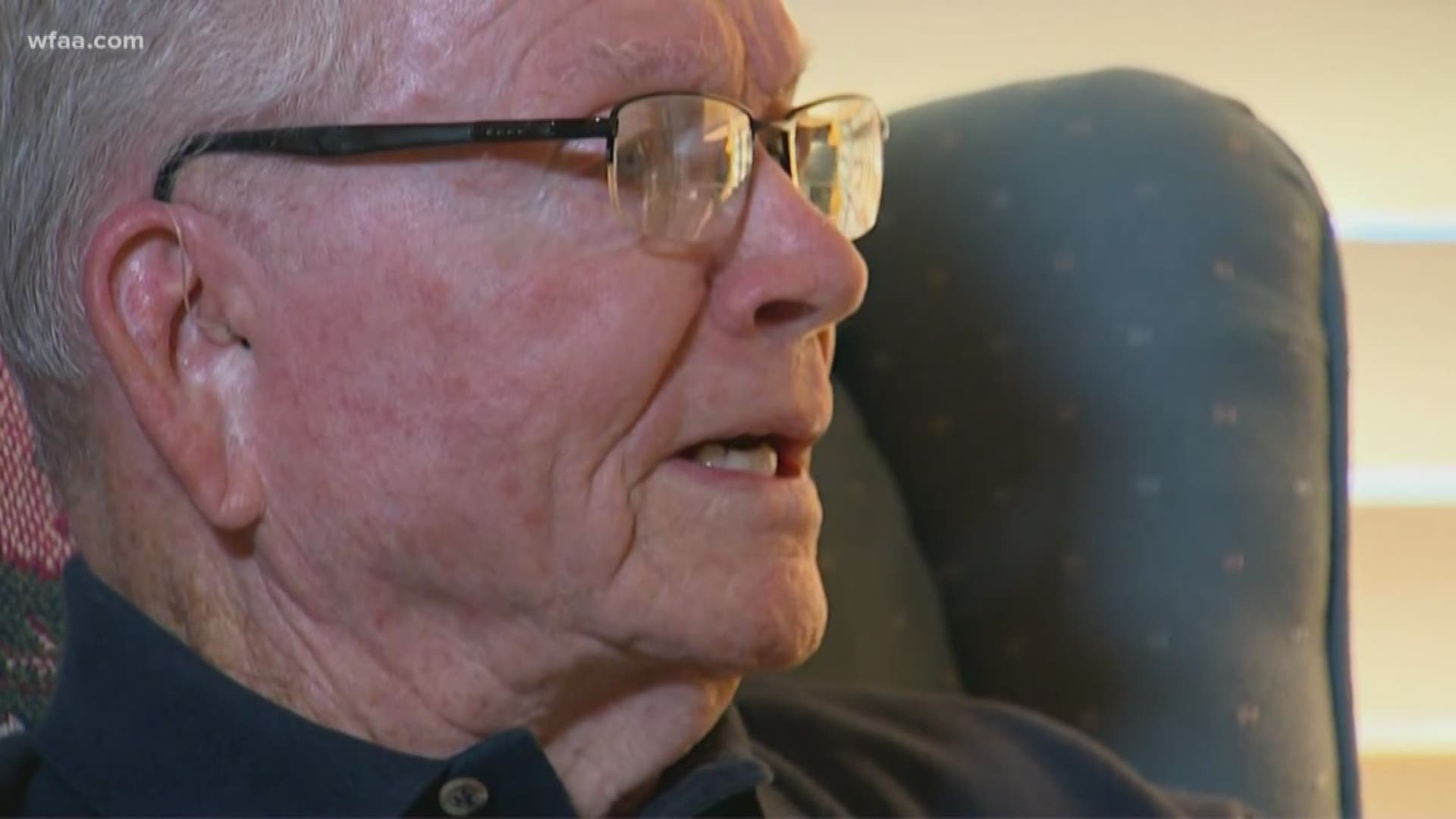 ENNIS, Texas — Editor's note: Since this story aired, WFAA has learned there are at least four other World War II veterans alive and living in or near Ennis, Texas. Bill Lewis plans to meet all of them.

A 93-year-old man is one of the last World War II veterans left in his town.

It's a difficult truth that all of America is wrestling with, as fewer than 500,000 vets who fought during the 1940s are still alive today.

That stat is according to the Department of Veteran Affairs, but Bill Lewis of Ennis tries not to think about it too much.

"It's not a good thought," Lewis said. "But I'm still very proud to be here."

Lewis recently became the last living member of the Honor Flight of Ellis County from WWII in the city limits of Ennis, a town with a population of almost 20,000.

He became an original member of the local Honor Flight in 2008, a flight that included a handful of veterans from Ennis and Ellis County who traveled from Texas to Washington D.C. to visit and reflect on their memorials.

Before June, only two WWII veterans from that flight remained in the city limits of Ennis: Lewis and John Horan.

Lewis, who served in the Army as a sergeant in the Philippines from 1944 to 1946, said that he doesn't quite know how to carry his new title as "the last man standing."

Before Horan died, the honor flight veterans in Ennis would meet once a month at a truck stop cafe to chat and keep up with one another.

"I still see those guys sitting at the table telling jokes about the war, the Navy, and the Air Force. You know, feeling sorry for guys like me who had to walk everywhere in the Army," Lewis said with a laugh.

An organizer of those meetings, Marylyn Wiley, said that she would still meet with Lewis every month as long as he is still alive.

Credit: Marylyn Wiley
Lewis with other Ennis veterans in a photo taken around 2013.

When Wiley told Lewis that, he said it made him uncomfortable.

"I was sad," he said. "And I still don't like to talk about it too much. It's kind of bad to think that they're all gone."

"Every one of those guys...just outstanding men. I was proud to know them, and it makes me feel very funny and sad to know I'm the last man standing," Lewis said.

Regardless of that title, Lewis told WFAA that he's proud to have served his country and still looks on his years of service with reverence.

"I was one of the lucky ones who came back. There are a lot of guys that I served with who are still over there," Lewis said.

"My right hand saved my life in World War II. My dad told me to shake hands with everyone you met because then they're no longer a stranger. That's how I met my commanding officer who helped me become a sergeant," he said.

Credit: Marylyn Wiley
Lewis (far right) at an event where a young veteran got a new home.

There's no doubt that Lewis is a walking piece of history, and coincidentally, the 93-year-old credits walking for keeping him alive so long.

When you meet Lewis, that handshake he talked about is as strong as ever, and he moves smoothly around his house and neighborhood for his age.

"I walk two to six miles every morning," Lewis said. "That kind of keeps me going and keeps my strength up. I think that's one of the reasons I'm still here, is because I walk."

During those walks, Lewis said he reflects on his time serving his small community for so many decades.

He was the mayor of Ennis for numerous terms, a Boy Scout leader, served as president for the Dallas Chamber of Commerce and the Oak Cliff Lions Club and has done endless work with charity groups.

His proudest accomplishment, however, is getting his wife Virginia to say, "I do."

He still calls her the most beautiful girl in the world and even tried on his Army uniform for her recently because she had never seen him in it.

"She said I was a good looking soldier," Lewis said with a laugh.

Lewis' goal is to live to be at least 100, and he told WFAA that he'll keep walking until he gets there.

"I wonder why I'm still here sometimes," Lewis said. "But you got to be positive. If you're not positive, then you can't make it. You can't just put things off until tomorrow, because it may be too late."

If you see any other veteran walking or out and about on Veterans Day, Lewis said the least you can do is say a simple thank you.

"That's the least you can do, is thank 'em," Lewis said. "And I always thank them for thanking me."