All agencies involved in the investigation confirm that County beaches on Padre Island are safe and there is no danger to the public. 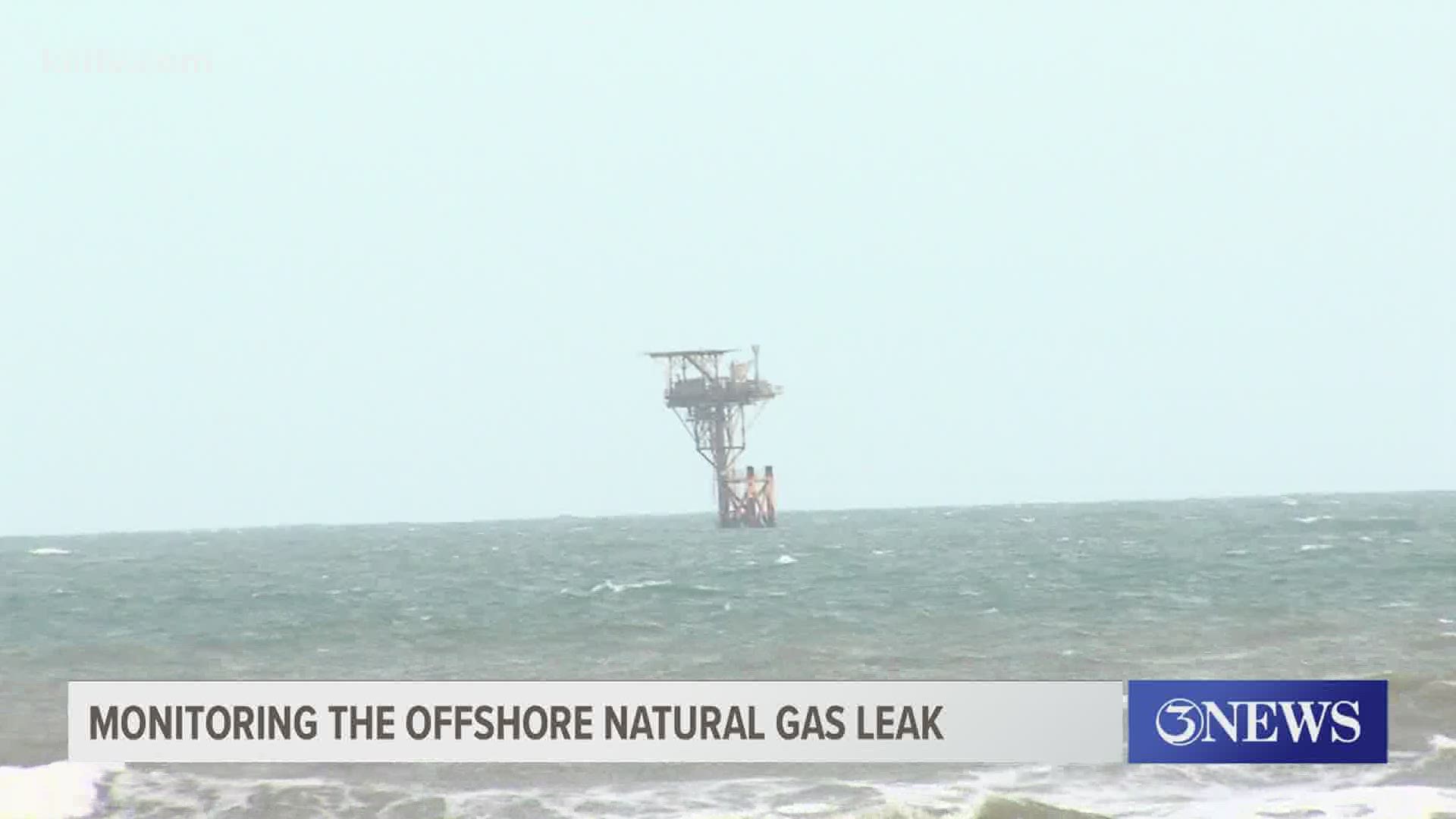 Officials with Corpus Christi said the owner of Magellan E&P said the natural gas, water and condensate plume has decreased to an estimated 5-percent of what it was originally on Tuesday. The City said the loud hissing noise has nearly been eliminated.

Officials said a vessel is on its way to Port Aransas from Galveston to pick up a crew to make repairs this weekend.

According to the City, crews will use sonar to scan the ocean floor to make sure it can accommodate the vessel and workers that will repair the valve. After a safety check, the repairing will begin.

All agencies involved in the investigation confirm that County beaches on Padre Island are safe and there is no danger to the public.

The City said the cause of the leak will be identified as soon as repair personnel can get aboard the rig.

Out of an abundance of caution, the USCG has established a Temporary Flight Restriction zone (TFR) for aircraft of any kind including drones that extends one mile around and 500-feet above the platform. In addition, they have identified an 800-meter safety zone around the platform which must not be crossed by any vessel without the permission of the Coast Guard. Due to safety issues, the company is asking the public not to fly any drones over the area.

The City of Corpus Christi and other agencies continue to keep a close eye on the unmanned natural gas platform that started leaking gas on September 1.

The plume coming from the Magellan E&P platform has diminished and the loud hissing noise has nearly been eliminated. A sheen that could be seen on the water near the rig yesterday is no longer visible, according to the City.

The Texas Commission on Environmental Quality is monitoring the air quality and assures city leaders there is no threat of hazardous materials.

Magellan is bringing in a large vessel from Galveston to repair the rig. It's expected to arrive at the rig by the weekend, weather permitting.

A safety broadcast has been issued warning all mariners to stay at least 1,000 feet away from the well. A Reverse Alert was also sent to Corpus Christi residents. 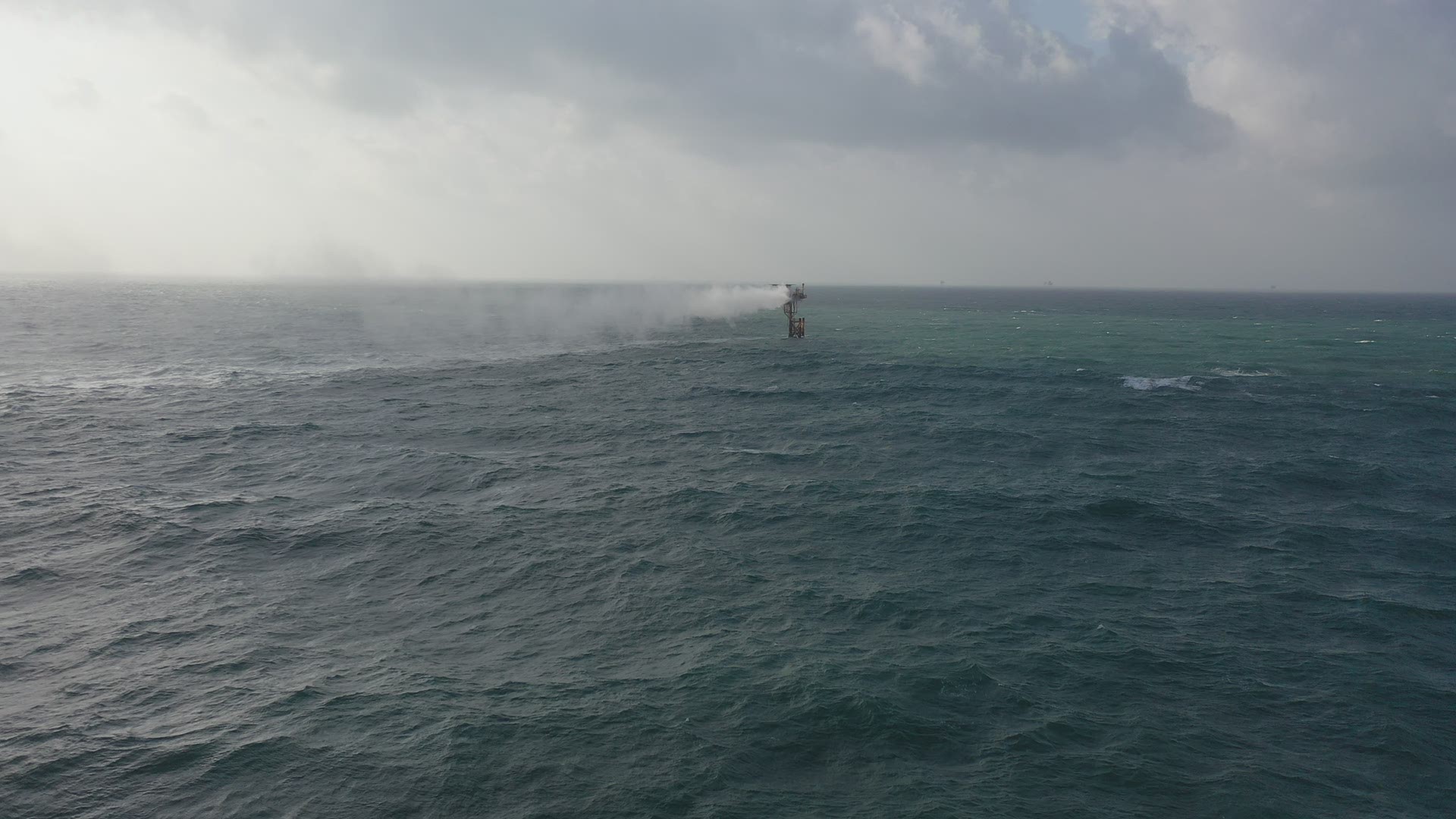 Statement from the City of Corpus Christi

The City of Corpus Christi continues to keep a close eye on the offshore incident involving a Magellan E&P platform located two miles from North Padre Island’s shoreline near Bob Hall Pier. A natural gas plume from the unmanned rig has diminished and a loud hissing noise has nearly been eliminated. A sheen that could be seen on the water near the rig yesterday currently is no longer visible.

The Texas Commission on Environmental Quality (TCEQ) continues monitoring the air quality and assures City leaders there are no hazardous materials being detected in the air, water, or on the beach. There is still no threat to citizens and no action is required by residents.

Wind and surf conditions are preventing a survey team from landing a helicopter on the rig or for boats to approach the platform to investigate the incident. Magellan E&P is bringing in a large vessel from Galveston to repair the rig. The vessel is expected to arrive at the rig by the weekend, weather permitting.

The City of Corpus Christi Nueces County, Magellan E&P, the U.S. Coast Guard (USCG), TCEQ, the Texas General Land Office (GLO) and the Railroad Commission of Texas (RRC) continue to monitor the incident and say the City – County beaches on Padre Island are safe and pose no danger to the public because of this incident.

Due to safety issues, the company is asking the public to refrain from flying drones over the rig incident area. Citizens are also reminded beach access from the Bob Hall Pier parking lot is temporarily closed for heavy debris removal from Hurricanes Hanna and Laura.

Statement from the US Coast Guard

The platform is an unmanned producing platform that produces natural gas, condensate, and water. The Texas Commission on Environmental Quality continues air monitoring near Bob Hall Pier and are currently reporting virtually no traces of methane.  The Texas Railroad Commission is on scene and will oversee response to the natural gas release and repairs to the platform.

Nueces County is supporting the coordinated response to an apparent natural gas leak approximately 2 miles offshore, east of Bob Hall Pier. The General Land Office and Coast Guard are working to shut down an offshore, un-manned rig to secure the gas leak, consisting of a mixture of natural gas and water.

Officials from TCEQ and the National Weather Service are monitoring the atmosphere and modeling wind pattern. Alerts may be issued as needed for health and safety; however, air monitoring does not show significant findings from initial readings.

The public should remain alert for notifications and remain clear of the area.

The natural gas well, which is owned by a company called Magellan, is approximately three miles offshore near Bob Hall Pier.

Nick Meyer, owner of Breakaway Tackle USA, is on the beach daily and was able to capture it on video. See the video below.

This is a breaking news update. Stick with KIII for the latest.